By the first decade of the twentieth century immigrants constituted almost sixty-six percent of the total inflow of people into urban America, and America had officially made its reputation as the melting pot of the world. Consequently this rise in immigration resulted in a rise of American nativism. American values, the lack of jobs, World War I, and II are just a fraction of the things that enhanced nativism in America between 1900 and 1930.

America was built on value and many American’s believed that immigrants were changing America by changing its neighborhoods and trying to implement their own morals into the deeply engrained ethics of American society.

Don't use plagiarized sources.
Get Your Custom Essay on American Nativism 1900-1930 Just from $13,9/Page

Since immigrants were far to poor to move farther away from cities so they huddled together in the already stinking slums, where they were allegedly hard to “Americanize.” This caused many Americans to think that America would no longer live up to its wonderful reputation as the land of opportunity, because immigrants were going to, slowly but surely, change the face of America.

Many Americans resented the fact that a majority of immigrants never really intended to become Americans and were merely in their country to earn money before they returned home to their families. Due to the fact that there was such a great inflow of immigrants there was always a lack of jobs, and many immigrants were considered to be strike breakers, as they would be called in to take jobs when worker had gone on strike. The resentment that American’s felt towards immigrants would be amplified when they were unable to find a job, or wages were lowered because there were so many people willing to work for a small wage.

Another aspect that added greatly to the up surging or nativism in America was the World Wars. With the rise of the Kaiser and the Nazi party Americans became more and more anti-German. American opinion of Germany was already ill-disposed, but was further inflamed against the Kaiser and Germany when a German operative in 1915 absentmindedly left his briefcase on a New York elevated car. Its contents included documents detailing plans for industrial sabotage which were quickly discovered and publicized.

German Americans numbered over eight million, out of a total 100 million, and were on a whole, loyal to the United States; however, the already existing hate of Americans towards Germans (or German Americans) was quickly amplified when tales of spying and sabotage were spread. Nativism was so strong during the World Wars that little things such as diarrhea epidemics were blamed on the Germans. The World Wars created such an hysteria that the nation was against all things Germanic. The teaching of German at High School and many colleges was discontinued and orchestras even found it unsafe to present German composed music.

Nativism was amplified between 1900 and 1930 because Americans feared that their country was beginning to change. The American hate of Germans was caused by the current issues of War, Germans were portrayed as, and many Americans thought that, the Nazi party embodied the rest of German society. Americans were beginning to become confident, comfortable and so set in their values that when different cultures and ethnic groups began to appear Americans were afraid that every slight change made would be a drastic blow to American society. 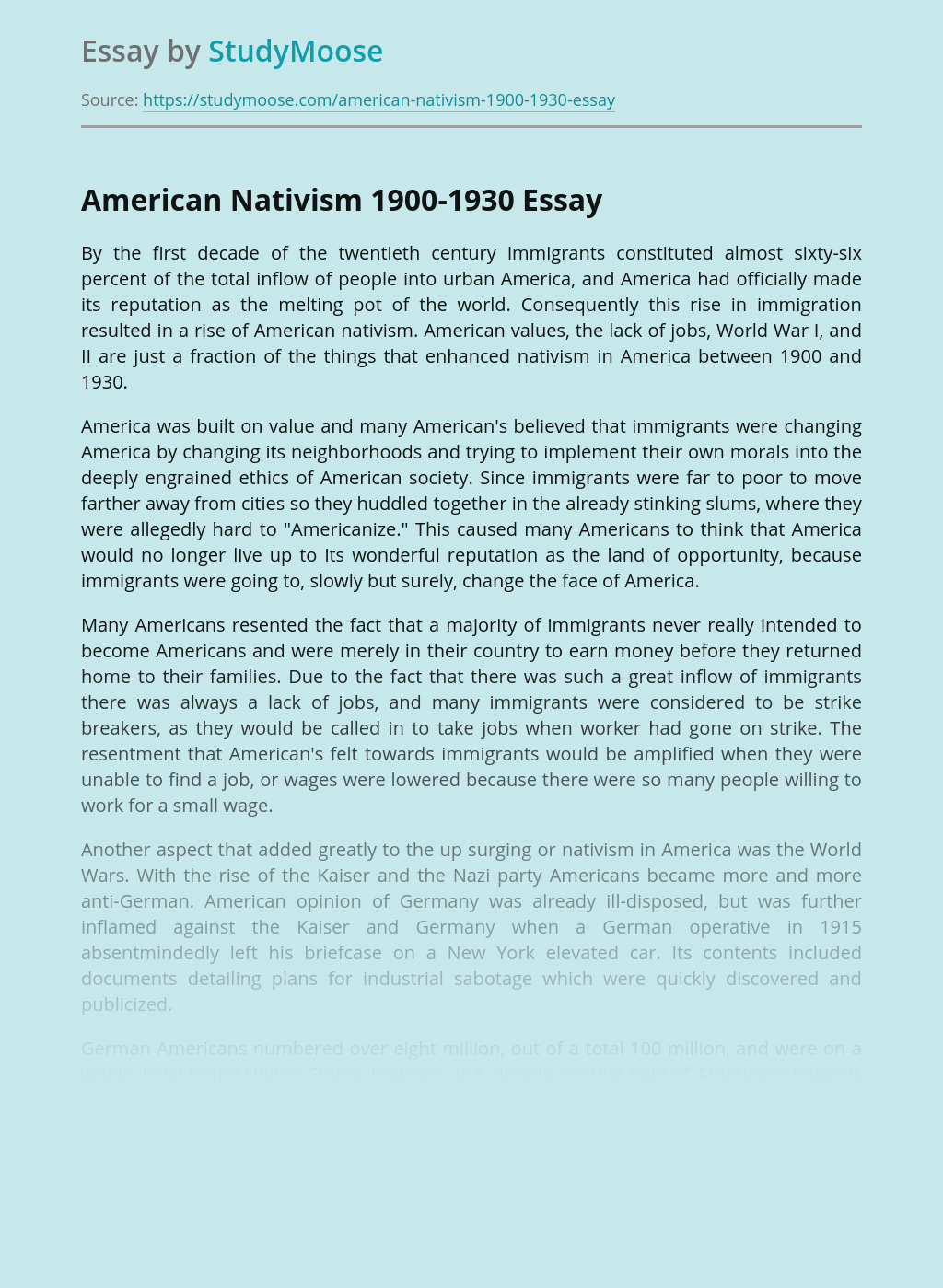 1. According to the website, what is Nationalism? Nationalism is loyalty to the idea of the state rather than to the community. 2. What is the difference between Nationalism and Patriotism? Patriotism is a love of one’s country that inspires one to serve for the benefit of its citizens. Nationalism is also a love of... VIEW ESSAY

View sample
Get Essay
Imperialism during the Progressive Era

Imperialism is defined as the policy of extending a nation’s authority by territorial acquisition or by the establishment of economic and political domination over other nations. Throughout the time period many people considered Imperialism as another way of reform and Progression. Economics, the military, and the countries nationalism were all ready for the change. This... VIEW ESSAY

“Lack of Nationalism and Patriotism of the Filipino Youth Today” Nationalism and patriotism both show the relationship of an individual towards his or her nation. The two are often confused and frequently believed to mean the same thing. However, we have lost that sense of nationhood particularly among youth. It wasn’t long time ago when... VIEW ESSAY

Tragedy is one of the most influential inspirations for art, including songwriting. In recent times, many artists responded to their feelings toward the destruction of the Twin Towers on September 11th, 2001, with an abundance of artwork, poetry, and songs. One of the songs, Toby Keith’s “The Angry American,” may conceivably be portrayed as a... VIEW ESSAY