Bharati Mukherjee’s story, Fathering, follows the story of a child caught between two cultures and her father caught between two women. The narrative follows the story of Jason, an American Vietnam vet. He lives with his girlfriend Sharon and his bastard daughter Eng, whom he conceived in Vietnam. He has had trouble getting both of them to live together peacefully, as both girls are seemingly possessive towards him, and despise each other.

Jason was an American soldier stationed in Vietnam during the war.

Don't use plagiarized sources. Get your custom essay on
“ Bharati Mukherjee’s Story ”
Get custom paper
NEW! smart matching with writer

Naturally, it wasn’t the best time of his life, and he struggles to keep his life together afterwards, going through separation divorce,

Jason is noted to have been keeping tabs on the child he had fathered in Vietnam. At a later point, when his life seemed to be falling apart, Sharon urged him to find what’s become of his lost child, to come to terms with his past, and move on with whatever outcome that played out.

Jason is satisfied to meet and accept Eng into his life. He seems to be gullible in matters where Eng is concerned, and defends her in every situation, the quality of a doting parent. He seems to try his best at being a good parent, reading to Eng while she is sick, patiently dealing with her tantrums, rebuking her for proper manners, etc. He seems to be easily manipulated by Eng, as seen when she wakes them up as she is craving attention, manages to finagle a coin from him, and gets him to ‘save’ her from Dr Kearns and his medication.

Though he tries his best to mediate, Jason is unfeeling about Sharon and ultimately biased in favour of Eng, and he casually dismisses her harrowed, fatigued appearance as amicable, docile, trying to rationalise it by saying “something incurable is happening to my women”. He seems to be clinging to Sharon at best, for when she disagrees with his diagnosis and prescription, his displeasure turns to desperation when he sees her preparing to step outside, which he interprets as desertion and panics. His previous relationship seems to suggest as much, and considering he spent the entire war on drugs, it can be understood that he is not the most sorted individual.

Sharon had pushed Jason to find this abandoned child of his, and at the time, cheerfully embraced the adoption of Eng, believing it to be a fresh start with Jason’s children. She had even strived to furnish and decorate the children’s room in preparation. However, further down the line, things seemed to have taken a turn for the worse, and now both of them can’t stand each other’s presence, and possibly feel jealous about their particular bond with Jason. Sharon seems convinced that Eng manipulates Jason, who becomes gullible whenever his daughter is concerned, and also believes that Eng needs counselling or even psychological help. She is noted to have changed, as her cheerful and accepting demeanour has shifted to stubborn and distraught with Eng’s frequent tantrums, deliriums and apparent self-harm through her heathen ‘money cure’, so much so that Dr Kearns had to give her a mild sedative to calm her down.

Eng is Vietnamese-American, she was conceived via a fling Jason had with a woman in Saigon during his time there. Having spent her infant days in Vietnam, she remembers her earlier life with her mother and grandmother. She is quite perceptive and quick witted. Despite having lived with her father in the United States for an unspecified period of time, she still remembers the childhood with her mother and grandmother. She seems to suffer from hallucinatory fits, and a particularly dark moments of her life seem to come back to her, that of her grandmother getting shot, at which point she gets violent and vocal about her hate for ‘Yankees’, including her father.

There is a clash of Vietnamese and American cultures underlining the plot of the story, which is derived from America losing the Vietnam war, which left American egos with holes. Eng is half Vietnamese, which puts this arrogance even more into perspective. There is a cold war raging between Eng and Sharon, drugs and coins, reality and hallucinations, abandonment and childcare, Vietnam and America. This conflict can be seen in various aspects along the story.

Sharon’s rebuke to “raid the fridge like a normal kid” clearly shows that she considers Eng alien, possibly inferior. Eng’s guarded stances to Jason’s affection and hostility towards Sharon suggests possessiveness as well as mistrust towards the American ways. Jason is familiar with the western procedure of caring for an ill child; to tell stories and sit beside them until they fall asleep, which falls short with Eng’s tantrums and . Sharon has correctly assessed that Eng has psychological issues, although it may stem from her dislike of the child. Jason himself wonders her smell about the unusual complexion of her bruises as an racial oddity, a thought that has undertones of superiority complex. Eng’s belief in the ‘money cure’ ie, pressing coins or amulets onto injured bodies as an attempt to heal them; Jason witnessed it during his term in Vietnam, although he is oblivious to the reality that his daughter is practicing the same remedy, to little effect.

Jason lives in denial of the Vietnam war, and he has struggled to put the past behind him. But in the entire story, we see him succumb to Eng, and abandon Sharon and his american views. Vietnam was a deceptive battlefield for americans, and most soldiers got lulled into a false sense of security, before falling into a trap or ambush. The battlefield may have changed, but America still lost the war to Vietnam. 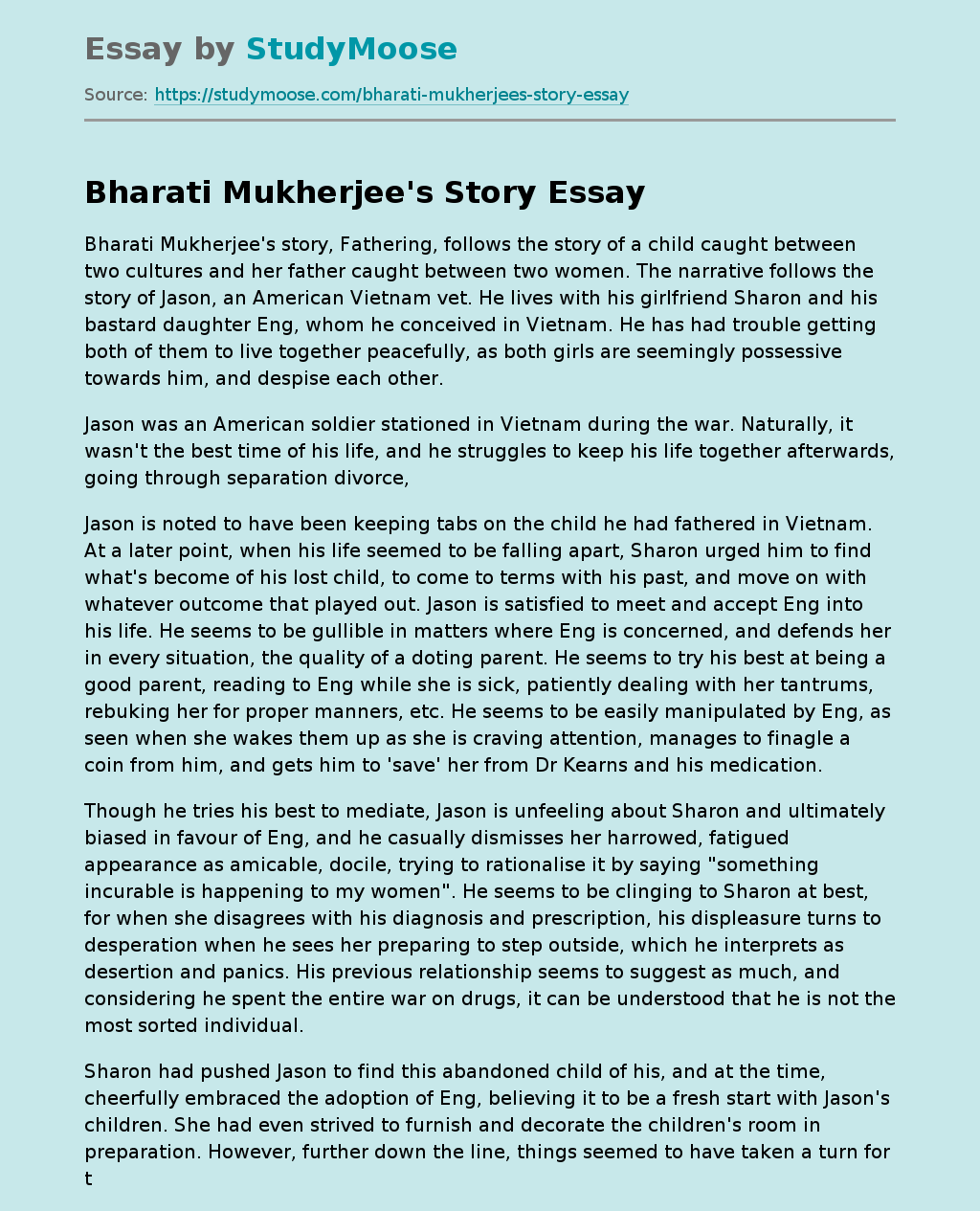