Aaron T. Beck is considered the father of cognitive therapy was born on July 18, 1921 in Providence Rhode Island. His mother, Elizabeth Temkin, married his father, Harry Beck, in 1909. He is the youngest of five children. Aaron Beck notes that his mother was quite depressed prior to his birth due to the loss of two of her children. Beck was born two years after his only sister died of influenza. He believed himself to be a replacement child for his sister. Beck says he takes joy in the idea that, even at a young age, he was able to cure his mother’s depression.

Don't use plagiarized sources. Get your custom essay on
“ Aaron Beck – The father of cognitive therapy ”
Get custom paper
NEW! smart matching with writer

The couple married on June 4, 1950, in Providence. She completed a law degree while raising their four children. She served as a superior court judge in Pennsylvania. Beck became interested in psychoanalysis while doing his internship at Rhode Island Hospital. Although Beck spent most of his career studying psychoanalysis, in the 1960’s Beck’s research deviated significantly from traditional psychoanalytic methods, focusing instead on distorted thoughts that led to problematic behaviors. He struggled to find a way to help his depressed client’s better capture their emotions. He realized that many of his depressed clients experienced recurring negative thought and that as long as they believed these thoughts to be true, they would continue to have symptoms of depression.

He theorized that in order to change the symptoms, he much change their distorted thinking. This belief led to the development of cognitive behavioral therapy. (Famous psychologist) Beck took a position at the University of Pennsylvania in 1954 in the psychiatry department, which is where he developed the depression research clinic. Beck began to work more intensely on his cognitive approach to depression, In1952, he published his first psychiatric article, a case study about treatment of schizophrenic delusion. It was the first of numerous publications he made that were later on recognized as significant precursor to the development of cognitive therapy. In 1961, he developed the Beck Depression Inventory (BDI). The BDI is one of the most widely used and referenced scales of depression.

It is a 21 item scale that uses a Likert scale to determine the severity of depression symptoms. Even though the scale is now revered as one of the well-constructed scales and useful, those in the psychiatric department at Penn did not receive the idea so well. In 1967, Beck became an associate professor; however, he only received a one year extension on his depression grant. Beck stared working from home, and this turned out to be just what he needed, and he produced his first book, Depression: Clinical Experimental and Theoretical Aspects. From here his work at the University of Pennsylvania began to pick up, and in 1971 he was awarded full professor status. 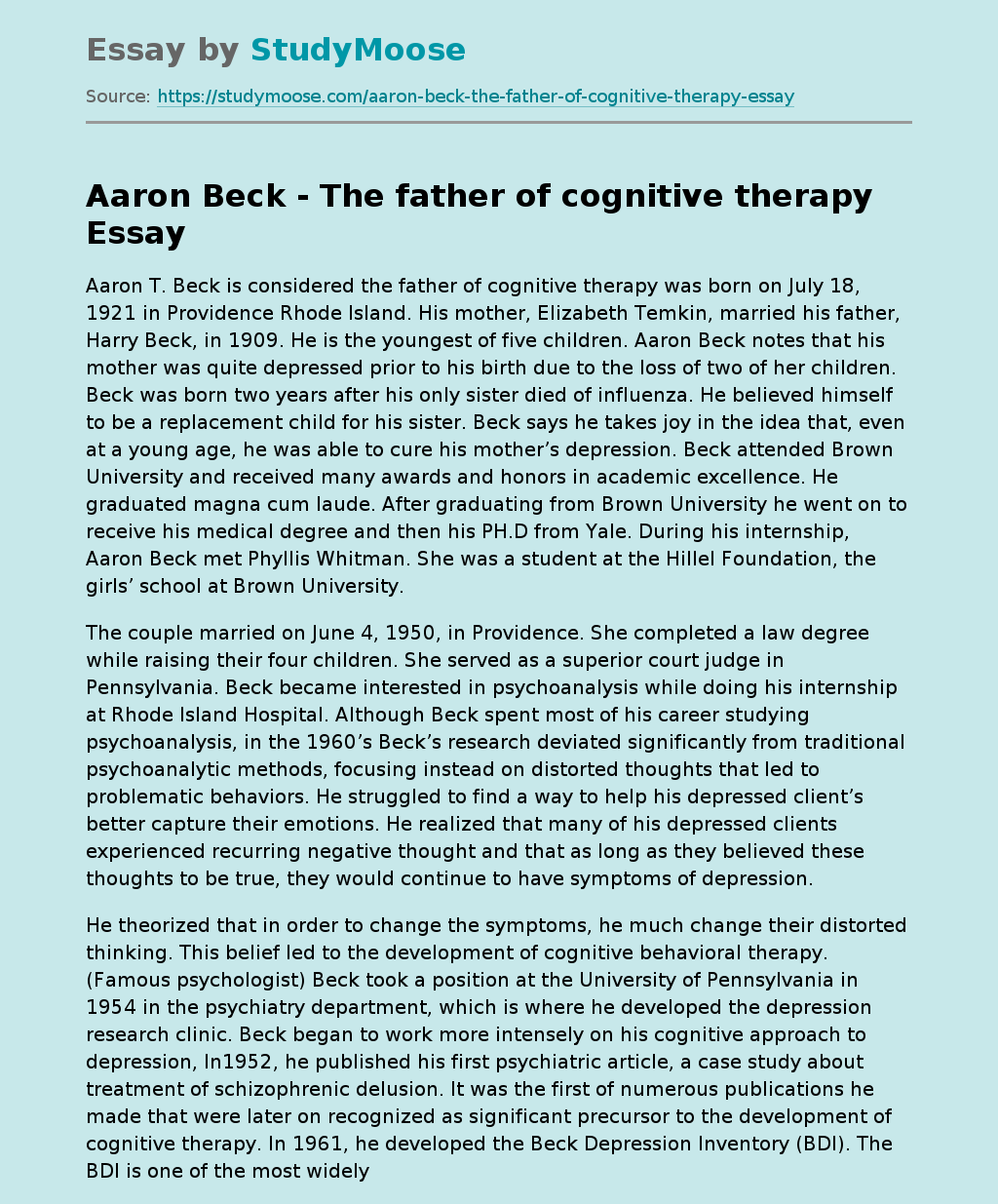