A theme explored by multiple texts is the idea that many people want to free themselves from the false reality with which they are controlled by. This is because humans are not truly satisfied and fulfilled unless they are free from control and oppression. This happens in 1984 (1949) by George Orwell, Plato’s Allegory of The Cave (381 BC) from Republic by Plato, The Matrix (1999) directed by Lana and Lilly Wachowski, and The Truman Show (1998) directed by Peter Weir.

In the novel 1984 by George Orwell, Winston Smith is a non-descript citizen, working for the Ministry of Truth in the state of Oceania.

Don't use plagiarized sources. Get your custom essay on
“ A theme explored by multiple texts is the idea that many people ”
Get custom paper
NEW! smart matching with writer

He is responsible for deleting and altering records, so that ‘the party’ can maintain authority and control. From the beginning of the book, he realizes that the world presented to him is falsified and controlled, in such a way as to keep the public under control. This is shown mainly when Winston is tortured in the Ministry of love, where O’Brien, his captor, holds up 4 fingers, and asks how many fingers he is holding up.

You must try harder. It is not easy to become sane.’ This shows how willingly the party will cling to power, despite falsifying the world.

However, Winston observes that, despite all his torture and punishment, that ‘Being in a minority, even in a minority of one, did not make you mad. There was truth and there was untruth, and if you clung to the truth even against the whole world, you were not mad.’ This shows how Winston is content to cling to the truth, despite all the adversity he will receive, for no other reason than he wants to be free from the party’s control. Although, in his heart, he knows that he can never free himself, for he is not powerful enough, he joins a society in order to possibly free others in the future. George Orwell wants us to understand that if we are in a world of lies, even if we don’t have enough power to free ourselves, we can try to cause change, and free those who come after us.

In Plato’s Allegory of the Cave, by Plato, from Republic, there are prisoners in a dark cave, who stand in front of a fire, and see only the shadows made by people and objects going past the fire. They learn that these shadows are reality, for example, a shadow of a snake is simply just a snake to the prisoners. However, one day, one of the prisoners is freed, and taken up to the real world. The sun burns his eyes greatly, but when he can finally see, he discovers real objects, and is told that the shadows were mere reflections of the real object. He is shocked, and quickly decides that he wants to tell the other two prisoners, who are still shackled in the cave, believing that the world was made up of shadows. When he attempts to tell the other prisoners that they are living in a false world, they attack him, and call him crazy. This is because, as Plato remarks ‘Those who are able to see beyond the shadows and lies of their culture will never be understood, let alone believed, by the masses.’The prisoner who was freed fights to inform the prisoners that they live in a falsified world, but they won’t accept it, and so the prisoner leaves, sacrificing his only friends and his safety, in exchange for living in the real world. This shows us that people will leave others behind, even their only friends, in order to be free from a false reality. The freed prisoner acts very similarly to Winston in 1984, who abandons normal society completely, just so that he can be satisfied with knowing he is in the real world.

The Truman Show, by Peter Weir, is a film about a man named Truman Burbank who finds out that he is actually living on a television set, and not the small coastal town of Seahaven. When Truman eventually realises that he is on a television set, he does everything he can to escape, and is stopped at every step by Christof, the director, who plans on keeping the show running, obviously. When Christof is asked why Truman has believed the world presented to him is real for so long, Christof tells us that ‘We believe the reality of the world with which we are presented. It’s as simple as that.’ When Truman finds out that he lives in a television set, he could continue living his simple, privileged life of luxury in white picket-fence America, but chooses to escape and find out what the world is really like. This shows us once more that although he could live in a false reality, in considerable luxury, he would rather be free and uncontrolled. This is also shown by Winston Smith, who would prefer to battle the party and find out what is really real, than to work 40hrs a week, go home each day to a comfortable apartment, settle down and have kids. Both these characters show us that although it may be easy to accept the reality of the world with which we are presented, in real-life, most of us prefer to know the truth.

In the film The Matrix directed by Lana and Lilly Wachowski, Thomas Anderson (known as Neo) is a hacker, living out his regular, day-to-day life. When he meets Morpheus, a man he had met online, he asks Morpheus ‘What is the Matrix?’ Morpheus says that ‘Nobody can be told what the matrix is, you have to see it for yourself.’

Neo then asks if the Matrix is actually real, to which Morpheus responds ‘If real is what you can feel, smell, taste and see, then ‘real’ is simply electrical signals interpreted by your brain.” Morpheus says ‘Have you ever had a dream, Neo, that you seemed so sure was real? But if you were unable to wake up from that dream, how would you tell the difference between the dream world & the real world?’ Neo is then offered two pills, a red pill and a blue pill, and is told “This is your last chance. After this, there is no turning back. You take the blue pill the story ends, you wake up in your bed and believe whatever you want to believe. You take the red pill you stay in Wonderland and I show you how deep the rabbit-hole goes.”

Although Neo can simply make the easy choice, he chooses the red pill, because he wants to escape from the false world presented to him. He then goes on to make a deal in subsequent Matrix films with the machines, one that says that any person who wants to leave the Matrix can, and sacrifices himself to ensure this deal happens. This shows us how much Neo wants to show the real world to everyone, even if it costs his life. This is also supported later on when Morpheus asks if Neo believes in fate. Neo says no, ‘because I don’t like the idea that I’m not in control of my life.’ This is a common idea throughout the other 3 texts as well, Winston Smith refuses to be controlled by the party, the prisoner from Plato’s cave no longer wants to live in a world of shadows and lies, Truman Burbank is not satisfied to live in a world which he knows is false. I believe the same is true for all

I believe that this is the same for all people, no one wants to live in a world which they know is false. They showed us that although for many protagonists it is a far easier life to simply accept the false world that they live in, most people want to free themselves and others from that false reality, and enter the real world.

A theme explored by multiple texts is the idea that many people. (2019, Nov 26). Retrieved from https://studymoose.com/a-theme-explored-by-multiple-texts-is-the-idea-that-many-people-example-essay 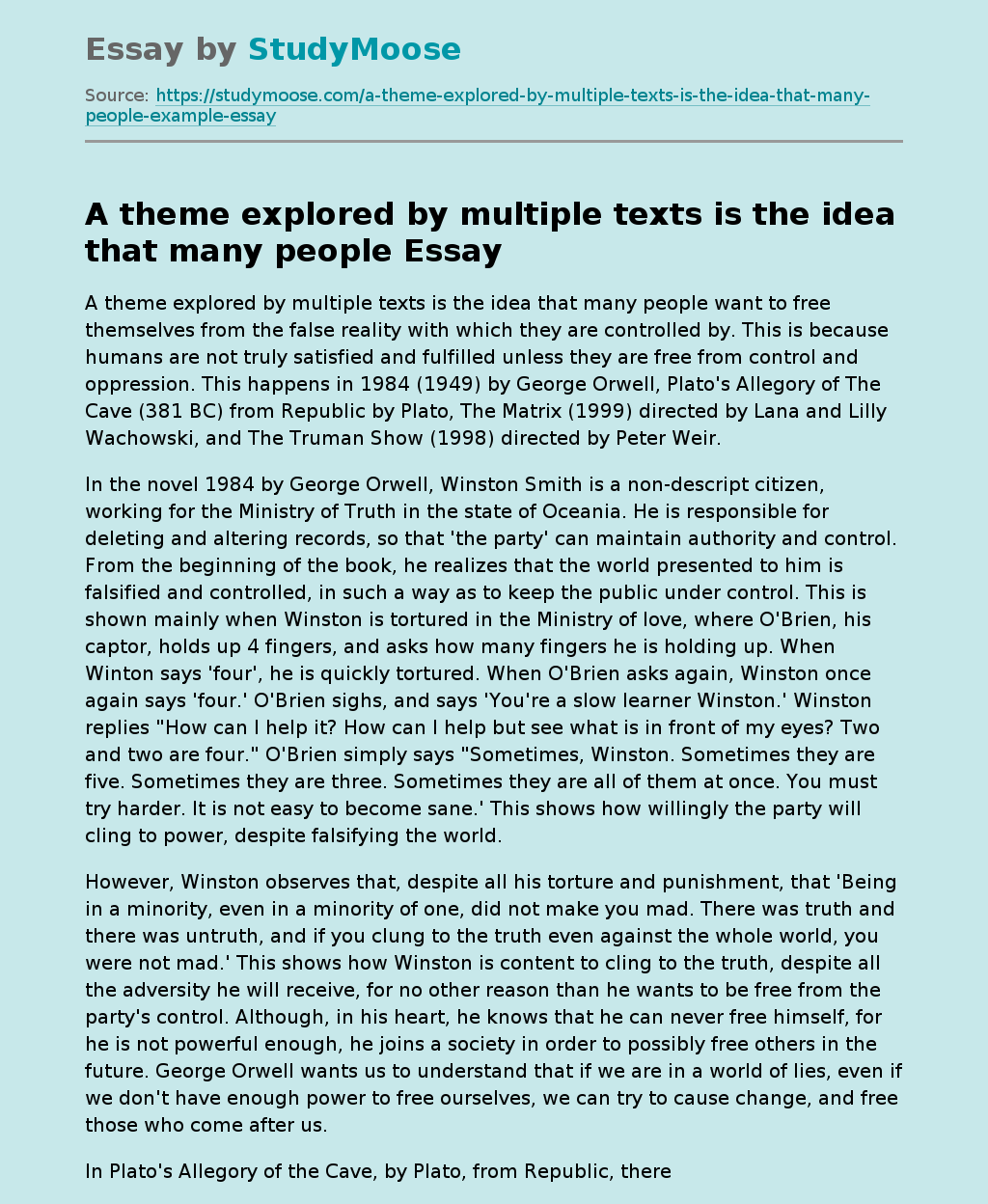