Sociology of Deviance and Crime: Easy A Movie Analysis

Question: Write a social sciences essay based on a documentary or film. Explore how deviance and/or crime are presented in this text and relate your findings to the various sociological perspectives and theories studied in class. Choice of text: Easy A (2010 movie)

Deviance is an unavoidable part of human nature, and as such, is a fascinating and essential social phenomenon to study. The film Easy A explores how a high school student turns to deviance in order to benefit in popularity and financially.

Don't use plagiarized sources. Get your custom essay on
“ Sociology of Deviance and Crime: Easy A Movie Analysis ”
Get custom paper
NEW! smart matching with writer

A number of sociological theories are recognisable in this film. It demonstrates clearly the motivations behind how primary deviance leads to secondary deviance. The text raises the theories of social exclusion and marginalisation, with specific relevance to adolescent years.

The teenage years are a big transition for people, as they mature from children into adults. This period is often a time of self-discovery or experimentation, as illustrated by the movie Easy A (2010). We are introduced to the protagonist, Olive, an unknown and unpopular schoolgirl.

She starts to become noticed when she lies about losing her virginity, and the fibs begin to escalate. Through a number of lies and rumours, Olive gains a reputation for her false promiscuity, and this has a number of repercussions on herself and her peers. Olive’s deviant acts clearly demonstrate a number of sociological theories and perspectives.

Olive initially lies about losing her virginity to her friend, but instead of revealing the truth and admitting her fabrication, she proceeds with it further and continues lying.

The transition from primary deviance to secondary deviance when regarding prostitution only happens when the individual accepts their ‘label’ and willingly repeats the deviant acts. The secondary deviant… is a person whose life and identity are organised around the facts of deviance. (Rosenblum, 1974) This is applicable to Olive in Easy A; she begins to take pride in her reputation as a ‘whore’, and even makes money from lying about having sexual relations with fellow classmates. Her identity revolves around her acts of deviance, making it clear that she is engaging in secondary deviance. However, financial gains was not Olive’s only motivation for committing deviant acts.

Social exclusion can effect an individual at any time in life, but is especially prominent in adolescent years in the schoolyard. At a time when everyone is too young to have found their true identity, each person is seeking individuality and validation from others. Teenagers often form into groups, and if someone doesn’t fit in to a group or try conforming, they can be subjected to social exclusion. Social exclusion is a valid fear of many adolescents, as Søndergaard (2012) explained in her study. Through interviewing and observing school children, Søndergaard found that many children have social exclusion anxiety. ‘Social exclusion anxiety’ builds on the social psychological concept of human beings as existentially dependent on social embeddedness.

This point is highlighted in order to focus on the anxiety that arises when social embeddedness is jeopardised and the hope and longing to be part of a community is threatened. (Søndergaard, 2012) Social exclusion anxiety should be considered as a potential motivation for deviance. In the case of Olive in Easy A, she isn’t a popular or noticed girl at school. However, once she starts engaging in deviant acts, she becomes noticed and even accepted. Although this isn’t her true personality, Olive feels validated – she has an identity. Therefore, social exclusion is a motivating factor for Olive to turn to deviance. However, she isn’t the only character to do so.

Olive first lies about losing her virginity to her best friend, but the first real deviant act comes when she and her gay friend Brandon deceive the whole school. Olive quickly gains popularity when most of the student body witnesses, from the other side of the door, her having sex at a party with a boy from school. Little does everyone know that it is all a ruse to get them to think that Brandon, her fake sex partner, is not gay in hopes that this very public display of sexual activity will prevent daily beatings at school and it works! (Perry et al., 2011) Being an openly gay student in high school, Brandon is subjected to torment, discrimination and marginalisation.

Consistent deviance often leads to marginalisation, and gender deviance is a prime example. Brandon was beat up at school and rejected by friends. Gay individuals have long been marginalised by not receiving equal rights by law, and are habitually marginalised by the general public due to homosexuality being considered gender deviance. Taywaditep’s (2001) study suggested that due to the marginalisation gay boys received throughout their childhood and adolescence, many began to appear more gender-conforming towards adulthood to avoid marginalisation. Gender conformity is associated with social acceptance and adjustment in men more than in women, and gender deviance is much more disapproved and penalized for men than for women. (Taywaditep, 2001)

Brandon seeks social acceptance and approval, so he turns to deviance to appear gender-conforming. Through his character, Easy A displays two theories about deviance; marginalisation due to gender deviance, and deviance as a result of social exclusion.

Easy A is a textbook example of the motivations behind deviance. Through the medium of film, it effectively demonstrates how adolescents become compelled to commit deviant acts. Furthermore, the film is backed up by sociological theories. Primary and secondary deviance is demonstrated when Olive begins to embrace her status and deviant nature. Social exclusion is shown to be a motivational factor in Olive’s and Brandon’s choices. Brandon’s gender deviance by being gay has forced him into marginalisation. He seeks to achieve gender conformity, and as such engages alongside Olive in her deviance. Therefore, Easy A is not simply an entertaining film produced for the masses. It should be considered as an informed, accurate, visual research study into adolescent deviance.

Sociology of Deviance and Crime: Easy A Movie Analysis. (2016, Apr 25). Retrieved from https://studymoose.com/sociology-of-deviance-and-crime-easy-a-movie-analysis-essay 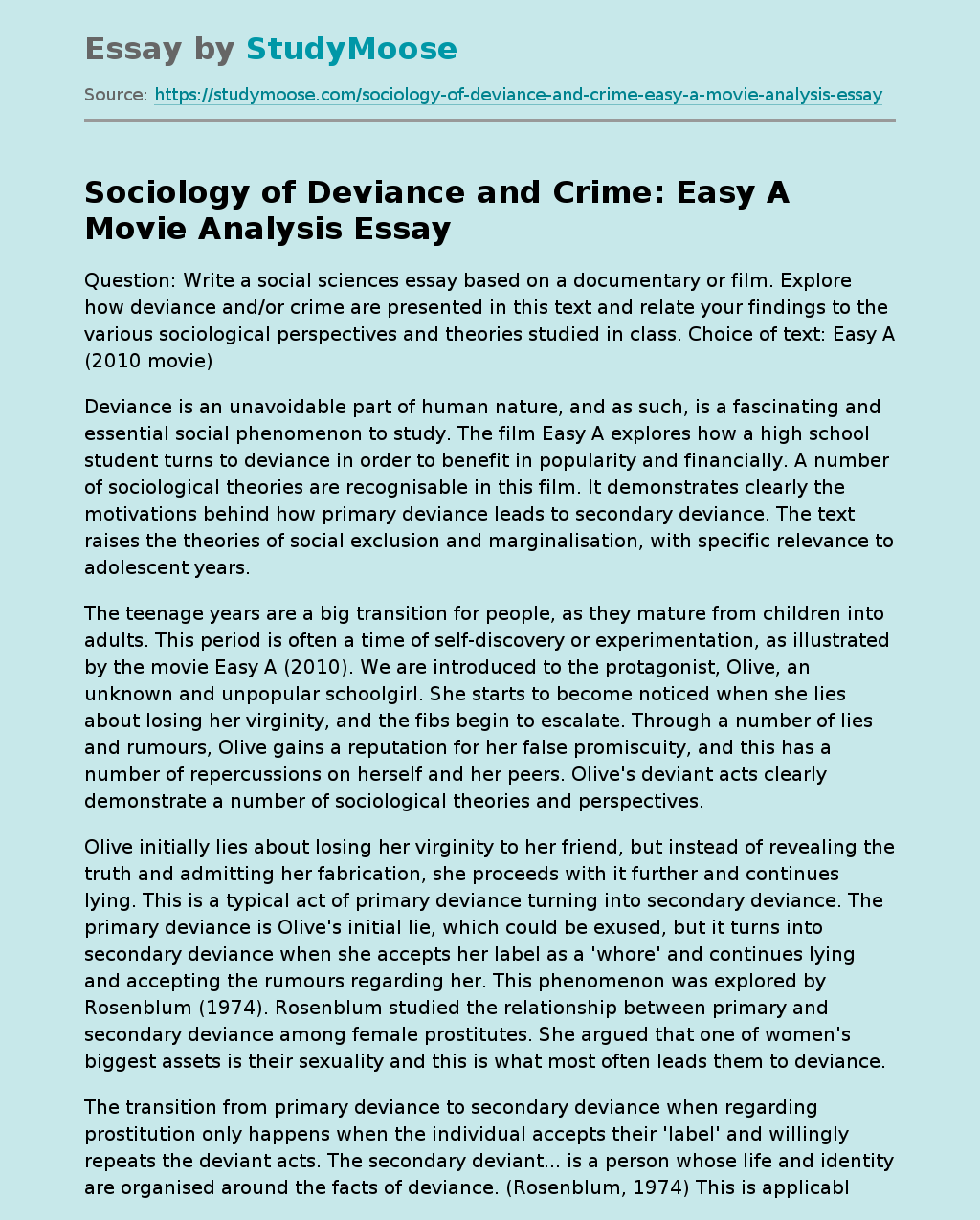