The fundamental themes of a Midsummer’s Night Dream are magic, dreams, and the difficulty of love. Throughout the play, these universal concepts are nourished in every scene by the recurring use of contrast. Shakespeare’s ideas are represented by his use of symbolisms. A Midsummer’s Night Dream conveys the themes of love, dreams and magic through use of contrast and symbolism throughout the play.

When Lysander comments, “The course of love never did run smooth,” he declares the most important theme in the play, that of the trouble of romance.

The romantic situations of the play are out of balance because Lysander and Demetrius are both in love with the same woman, Hermia. This leaves Helena by herself to ponder the nature of love. She says, “Love looks not with the eyes, but with the mind,” because she feels that Demetrius does not see her own beauty because he is so busy thinking about Hermia. In the same way, the relationship between Tatiana and Oberon is out of sync because Oberon wants the Indian boy.

Also, an imbalance in nature occurs when Tatiana falls for Bottom’s ass-head. These contrasting scenarios all have in common the potential for harmony amongst all the lovers and finding harmony is the basis of the play and necessary for the expected happy ending.

Shakespeare uses magic as a theme when he uses the fairies magic, symbolized by the love potion, to create hilarious situations in the play. The potion is symbolic of the supernatural power of love and contributes to the surreal and fantastic atmosphere of the play.

The potion causes havoc, but in the end creates balance amongst the lovers.

Dreams are an important theme in the play because they go hand in hand with the magical chaos in the forest. The recurring theme of dreams is evident when the characters try to explain bizarre events in which they are involved. For example, when the lovers are found in the forest and awakened by Egeus, Hyppolyta and Theseus, Lysander says, “My Lord, I shall reply amazedly, half sleep, half waking; but, as yet, I swear, I cannot truly say how I came here.”

It seems that Shakespeare was interested in Dreams and sought to convey that to his audience by the use of fairies and magic in the forest. At the end of the play, Puck says, “If we shadows have offended, think but this, -and all is mended, -that you have but slumbered here while these visions did appear. And this weak and idle theme, no more yielding but a dream.” This gives the play a sense of illusion necessary for the audience to experience the play’s surreal and fantastical atmosphere.

Contrast or opposition is used throughout the play to develop the structure of the play’s themes. Oberon is the King of the fairies is ruler over the magical forest. His desires revenge on Titania leads to chaos. In contrast, Theseus, the duke of Athens represents power and order. Also, he is only seen in the beginning and end of the play, and is removed from the happenings in the forest. The land they rule over is also in contrast. Athens symbolizes reason, whereas the forest symbolizes a place of mystery. The best example of visual contrast in the play is when the beautiful, graceful Tatiana falls for the grotesque and clumsy Bottom with the asses-head.

Shakespeare’s uses powerful themes, symbolism and contrast to create a fantastical realm of dreams and illusion. The lighthearted structure of the comedy lets the audience know that a happy ending is at hand and leaves the spectator at ease to ponder over love’s difficulty, the magic or supernatural power of love, and what is illusion or dream. 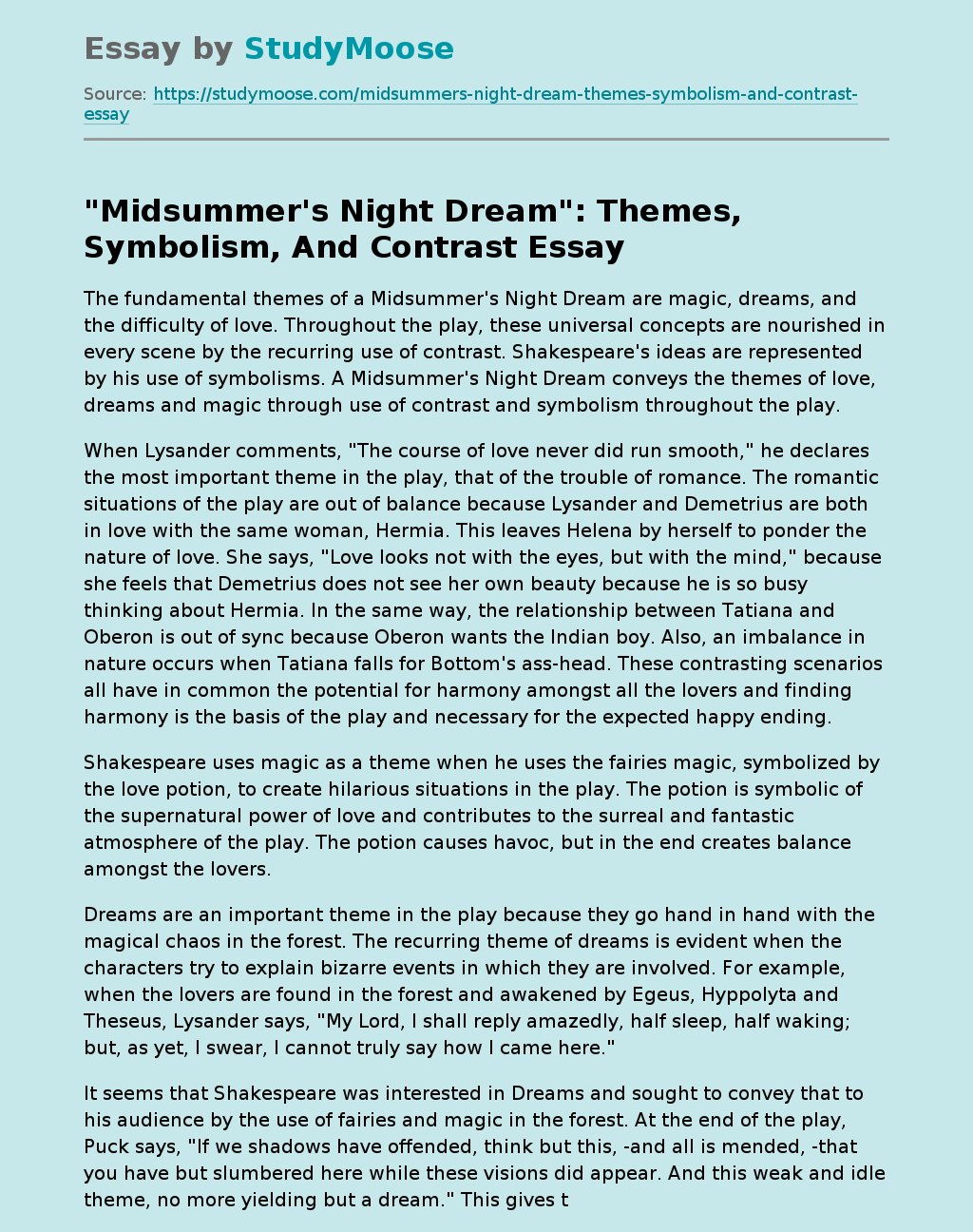