The movie I chose was Easy A because there are many psychological concepts this movie that relate to real-life events and it covers many theories we learned about in this class. Easy A was released in 2010 and directed by Will Gluck. It’s about a teenage girl named Olive who accidentally admits to her friend Rhi that she was having sexual relations with boys. She felt pressured into lying since her friend had already engaged in sexual acts with her boyfriend.

A rumor then spread and many people in the school then ignored Olive because they thought what she did was an immoral act, but the guys started giving her more attention. I feel that this applies to many people in the world today and it is not just in this movie. Many social psychological concepts come up in this movie like: conformity, looking glass self, self-presentation/impression management, cognitive dissonance, situational constraint, majority influence, self discrepancy, and social comparison theory to name a few.

In the beginning of the movie, Olive lies while talking to her best friend, Rhi and accidentally said that she had slept with someone when in fact she was still a virgin. Rhi was not a virgin anymore so Olive felt that she had to lie to conform to the norms of her friend. The Social Comparison Theory says that to interpret whether our performances are successes or failures, we must often compare them with our own goals and expectations or with the performances of others.

(DeLamater, 85) This theory helps us have conformity with others just as Olive compared her views to her friend’s views and then ended up lying to receive positive reinforcement from her friend. Olive was using this theory when she looked at one of her peer’s actions and saw her own behavior as in opposition to the norm. Then because she probably felt inferior to Rhi, she changed her behavior. Had she not gone along and followed what her friend did and changed her behavior and looks she would have been violating this theory.

The Asch Conformity Paradigm shows that within limits groups can pressure their members to change their judgments and conform with majority’s position even when the position is obviously incorrect. (DeLamater, 287) This is shown in the movie when at first she is pressured and says she had sex with someone because her friend did and once she got that reputation the guys persuaded her to act like she was being promiscuous and having sexual relations with them. Even though she knew this was wrong she still decided to do it because the majority influence put more pressure on her to go with “having sexual relations” to help some of her friends (who were guys) become more popular. This resulted in cognitive dissonance, which is a theory, that deals with consistency between behaviors and attitudes and it occurs after a decision and when one acts inconsistent with their beliefs. (DeLamater, 153)

This is shown when she makes the decision to lie to her friend and say she has had sex and afterwards she has second thoughts and starts to regret it because it went against her values that she held. Another outstanding concept in this movie was self-presentation/tactical impression management. Self- presentation and impression management are petty similar because they are both processes by which individuals attempt to control the impressions that other form of them during interaction. (DeLamater, 89-90). Throughout his movie Olive presents herself to everyone at her school as someone she was not. She was viewed as the new school slut and at first she had cognitive dissonance about this but she then started to embrace it. Olive began to look the part by wearing risqué clothes like corsets and tight revealing shirts.

She even sewed an “A” on her clothes as a reference that she was being portrayed as Hester Prynne, the main character from The Scarlett Letter who was deemed to be adulterous and that was very inappropriate at the time. By presenting herself this way she is going with Cooley’s Looking Glass Self that says we acquire our view of ourselves from the views of others. (DeLamater, 69) By all of her classmates viewing her as promiscuous she started to view herself as that and changed the way she usually dressed to be more racy. This change in style and behavior lead to self-discrepancy which is when a component of the actual self is the opposite of a component of the ideal self or the ought self. (DeLamater, 82) This is seen when Olive goes out in public and portrays herself in a different way than what she believes her actual self as because she is more concerned with social interactions than what her actual self believes.

This whole change of self was to boost her self-esteem because she knew if she didn’t change the way she looked to fit the part she would be embarrassed and humiliated and her self-esteem would be lowered. Throughout this movie you can she the deviant behavior and how she violates the social norms of people her age. She dressed scandalously, she acted promiscuous, she acted out and got a rebellious attitude. These rebellious things Olive was doing changed her behavior and labeled her as deviant. Deviance is not considered deviant until it is labeled as that. So in her case, Olive really considered bad until a group of people at her school started going against what she was doing and even her friend, Rhi joined in. they started protesting what she was doing. This created a lot of aggression and hate for one another and eventually lead to intergroup conflict.

In intergroup conflict there is a situation in which groups take antagonistic actions toward one another in order to control some outcome important to them. (DeLamater, 326) The outcome this group sought was to get Olive and other girls to stop acting in this way and being immoral. They went around and held signs around the school protesting what they thought of her behavior. After this, Olive finally realized that she was doing wrong and she made a video telling the truth to everyone and saying that it was all just an act. Everyone then viewed her as a liar for what she did, but she didn’t care because she saw what she did was wrong and it was a better reputation than being called easy.

The whole reason Olive took on the role of being the school slut was to keep the type of self-presentation and tactical impression management. I think a lot of people feel the same way today in our world because if because I agree in the looking-glass self because I agree that you think of yourself the same way your peers and significant others see you. So if someone sees you as fat, ugly, promiscuous, or something else I agree that you would start to internalize what they say and take on that role.

By the end of the movie, Olive’s beliefs about herself had changed significantly. She knew throughout the movie that the person she was portraying was not truly herself and it did not go along with her values but she kept the role to keep up with the rumor that she had started. In this movie we could see how social rejection affects the way you view yourself and how you carry yourself. In Easy A there are issues that we discussed in Social Psychology and many of them can be applied to everyday experiences, you just have to be aware of them because they are truly all around especially in movies today. 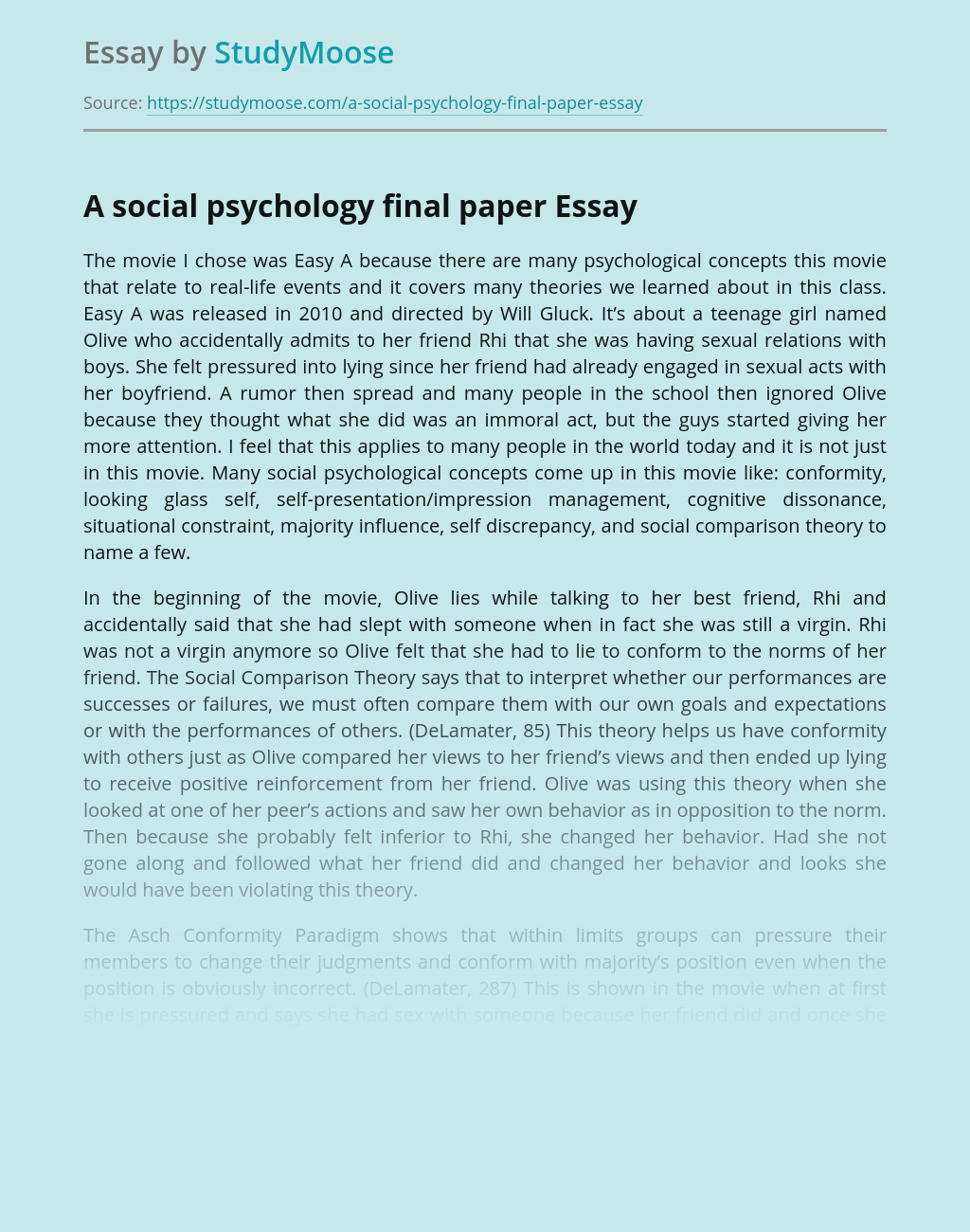