The handsomest drowned man in the world

Magical realism is a genre that portrays both reality and fantasy. As defined by Faris (2004) in Ordinary enchantments, magical realism is a genre of writing that includes an irreducible element of magic and details that suggest phenomenon (Faris, 2004, p. 7). He describes the irreducible element as: “…something we cannot explain according to the laws of the universe as they have been formulated in Western empirically based discourse…” (Faris, 2004, p. 7). In Gabriel Garcia Marquez’s short story, The handsomest drowned man in the world, the facets of magical realism are rife.

Don't use plagiarized sources. Get your custom essay on
“ The handsomest drowned man in the world ”
Get custom paper
NEW! smart matching with writer

He uses magical realism to enchant the reader. The story is of a small cliff-side and coastal community that is inhabited by about twenty people and is barren, flowerless land. This village is forever changed by the arrival of an awe-inspiring corpse. The elements of magical realism start to appear when this body that has washed ashore is of a man who is unimaginably beautiful, taller than any person they had ever seen, and is not rotted; although, any corpse traveling through the ocean should have been rotted by then.

The villagers immediately take him in as one of their own. They name him Esteban and imagine what their lives would be like with him around. This story is in a realistic environment, but the features of this man they have found are “magical” almost, and the fact that they so effortless accept him is one of the factors that constitute this short story as magical realism. The elements of magical realism are exposed as Marquez compels readers to question their way of thinking by portraying characters and situations that illustrate phenomenon and extreme faith.

The villagers show tremendous faith in their immediate acceptance, instead of questioning and fear, of the astonishing drowned man who has so many qualities that are above and beyond that of a normal human being. “…the drowned man was becoming all the more Esteban for them, and so they wept so much, for he was the more destitute, most peaceful, and most obliging man on earth, poor Esteban. So when the men returned with the news that the drowned man was not from the neighboring villages either, the women felt an opening of jubilation in the midst of their tears. ‘Praise the Lord,’ they sighed, he’s ours!’” (Marquez, 1972, p. 3).

The town falls in love with Esteban, treating him like one of their own, but even better. The women imagine what his life was like before, being so much bigger then everyone else and being more handsome then the rest. They make clothes and jewelry for him and imagine what their lives would be like having him as a husband. The villagers really seem to come together in their admiration of Esteban. Their faith strongly exemplifies the magical realism elements in this story, seeing as normally a reader would expect society to not so readily except something that is so unnatural and uncommon to them. The villagers later decide they need to hold a magnificent funeral for Esteban and they hope that he will return to them one day, as he is a part of their community in their eyes. “They let him go without an anchor so that he could come back if he wished and whenever he wished, and they all held their breath for the fraction of centuries the body took to fall into the abyss. They did not need to look at one another to realize that they were no longer all present that they would never be” (Marquez, 1972, p. 4).

They hold Esteban in such high esteem, yet he is only a dead corpse. This shows the characteristics of magical realism, Esteban having the irreducible element of magic that enchants the village. Also, they have this blind faith that this dead body will return to them which is why they did not tie an anchor to him. That phenomenon would likely never happen in the real world, but it makes readers question if this glorious being would actually return and be part of their village. During the grand funeral, the villagers recognize the emptiness and dryness of their streets, land, and dreams. Not only do the people of the village desire Esteban to return, but they want to transform their village to be a better fit for him, and ultimately for themselves as well. “…everything would be different from then on, that their houses would have wider doors, higher ceilings, and stronger floors… they were going to paint their house fronts gay colors to make Esteban’s memory eternal and they were going to break their backs digging for springs among the stones and planting flowers on the cliffs…” (Marquez, 1972, p. 4).

Esteban’s marvel has charmed the village into wanting to better themselves. Even if over a non-living body, this village will now not be a bland and flowerless desert. The community is over all bettered through their blind faith in Esteban. Is blind faith really a bad fixation? If a community chooses to become a greater place because of the belief in an unlikely event, then there does not seem to be much harm. And the concept is not only in fairy tales and magical realism stories. In many religions, the people believe in an idea that seems absurd; but, it can bring them together and set a standard for positive lifestyles and actions.

Some religions even have beliefs similar to the story line of Marquez’s short story, where there is a magnificent being that has died and the people are waiting on the beings return. While in the mean time they try to better their community and their selves for this individual. An example of this is Jesus Christ, and the Christians belief that he will one day return to this world. It seems plausible that Marquez was making a statement on society’s blind faith in his short story. But also, he fascinates the reader with a tale of a phenomenon, while stilling maintaining the readers feeling of reality. Furthermore, not only is The handsomest drowned man in the world an insightful short story, but it also greatly exemplifies the unique style of writing that is magical realism.

References
Marquez, G. (1972). The handsomest drowned man in the world: A tale for children. In Leaf storm and other stories (pp. 98-104). Retrieved from http://books.google.com/ Faris (2004). Magical Realism between Modern and Postmodern Fiction. In Ordinary Enchantments (pp. 7-42).

The handsomest drowned man in the world. (2017, Feb 02). Retrieved from http://studymoose.com/magical-realism-in-the-handsomest-drowned-man-in-the-world-essay 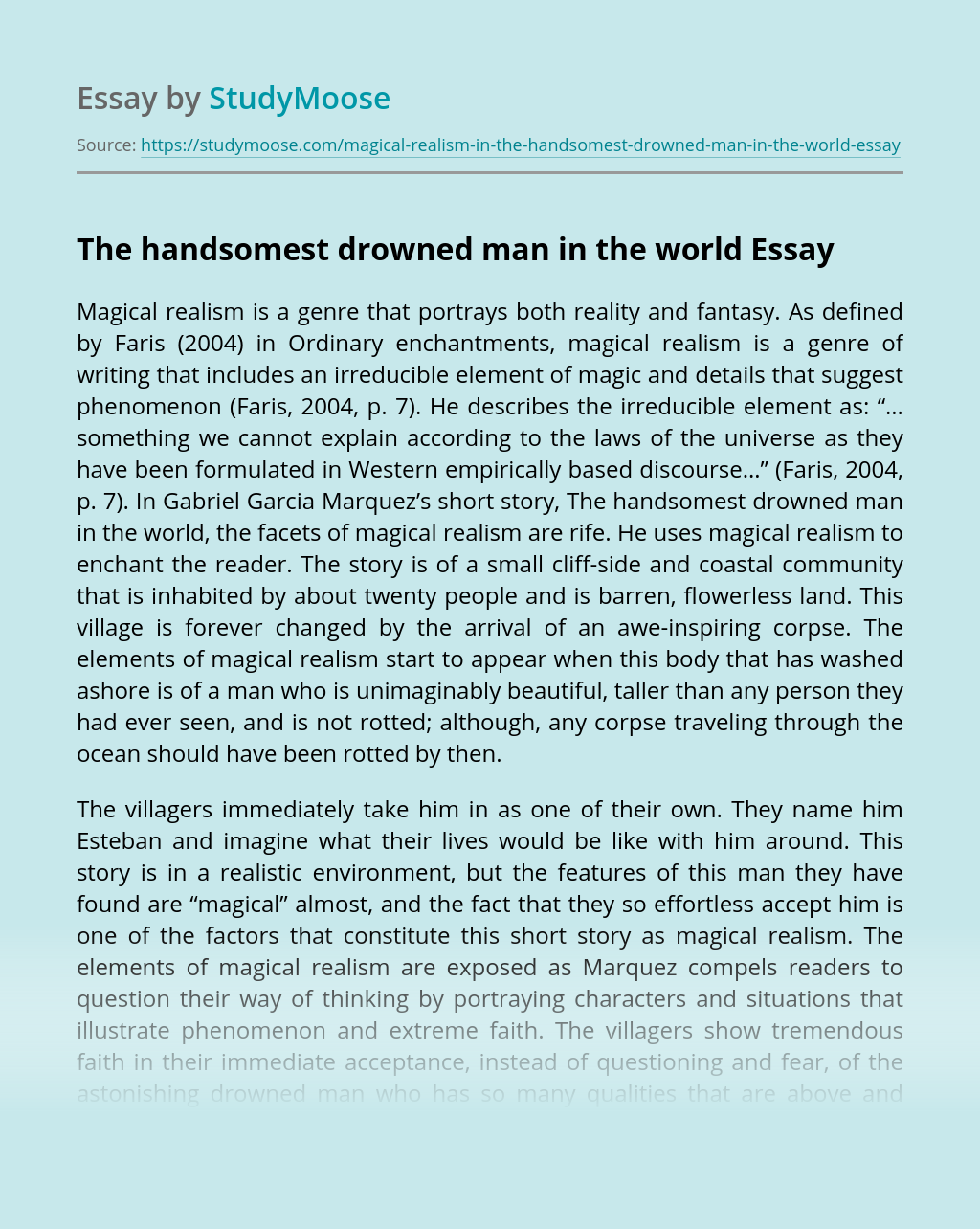