In Mary Shelley’s Frankenstein, the author expresses how man can lose touch with reality, which leads to becoming a victim of his own imagination. Since Romantic writers, like Shelley, exalted the power of imagination, Shelley criticizes this ideal by showing how it may lead to obsession. The influence of Mary Shelley’s parents, other writers, such as her husband Percy Shelley and Byron, and the use of Gothic novel literature help her emphasize imagination, the concern with the particular, the value of the individual human being, and the supernatural.

Don't use plagiarized sources. Get your custom essay on
“ Imagination vs. Obsession in Mary Shelley’s Frankenstein ”
Get custom paper
NEW! smart matching with writer

Mary Shelley’s parents were famous writers and intellectuals in England. Her father was a philosopher and novelist named William Goodwin, who encouraged her early intellectual endeavors, but remained emotionally distant and self-involved. This figure in her life might have been an influence when creating the character of Frankenstein, which is also self-involved. Her mother was Mary Wollstonecraft, which was the first and most influential feminist writer in England in her times.

Her mother may also have been an influence to her literature because she might have been encouraged. The other influence is Mary’s husband, Percy Shelley, who entertained with tales of the supernatural. Percy Shelley was an intellectual who had the fullest of philosophical speculation. His imaginative and eccentric manner put him out of touch with his feelings and needs of those around him. This can be inspiring for Mary Shelley’s novel, since his main character loses sense of reality.

With the knowledge of the Romantic ideals and her influence, Mary Shelley criticizes the excess of imagination in the novel.

Shelley tells us about a scientist named Victor Frankenstein who is eccentric and believes he is the only man who can create man. She uses this character to “mock the stupendous mechanism of the Creator of the world”. The author expresses Frankenstein’s ambition and high self-esteem at the beginning of Chapter IV of the novel when Victor says, “My application was at first fluctuating and uncertain; it gained strength as I proceeded, and soon became so ardent and eager.”(p.588) The fact that Frankenstein makes this statement demonstrates that his pride is taking over reality. Frankenstein also believes he can create what is supernatural, as if he is God. This is shown when he tells us, “Unless I had been animated by an almost supernatural enthusiasm, my application to this study would have been irksome, and almost intolerable.”(p.589) Shelley is telling us how man thinks he can be superior when imagining, which leads to obsession.

Shelley keeps telling us about Frankenstein’s pride and egocentrism when the scientist says, “among so many men of genius who had directed their enquiries towards the same science, that I should alone be reserved to discover so astonishing a secret.”(p.589) Frankenstein is already losing his mind because of the supernatural ability he has, and starts losing touch with reality. Shelley is now making us see how Frankenstein believes “the creation of the world is within his grasp” (p.589) and how he uses imagination as the power of creation. After being confident with his power of creation, Shelley demonstrates how Frankenstein himself starts realizing how imagination is taking over him. We can see that Frankenstein notices this when stating, “I could tear my thoughts from my employment…but which had taken an irresistible hold of my imagination.”(p.591) The scientist expresses how he does nothing else, but work on his creation.

He tries to justify his excessive desire by telling us, “if no man allowed any pursuit whatsoever to interfere with the tranquility of his domestic affections, Greece had not been enslaved…”(p.591) and other historic events that would not have happened if man did not work for it, like him. Shelley then shows at the end of Chapter V that Frankenstein is anxious, and describes his creation as a “catastrophe” (p.592). Afterwards, Shelley tells us that Frankenstein states, “I had desired it with an ardor that exceeded moderation; but now that I had finished, the beauty of the dream vanished, and breathless horror and disgust filled my heart.”(p.592) With this statement, Mary Shelley shows us how after all the imagination and desire, Frankenstein is not satisfied with his creation.

Finally, the scientist knows he lost touch with reality and needs to ease the load in his mind after creating the monster. In the novel Frankenstein by Mary Shelley, the author shows us how the scientist Victor Frankenstein loses touch with reality at the end of the story, after an imagination that led to his obsession of creating life. After Victor Frankenstein is confident, egocentric, and believes he has supernatural powers to create life, he regrets his creation because he recognizes how he dedicated much of his life to this work, but it was not worth it. Mary Shelley teaches us the lesson that if we are obsessed with something we want to achieve, we may end up losing touch of the real world around us. 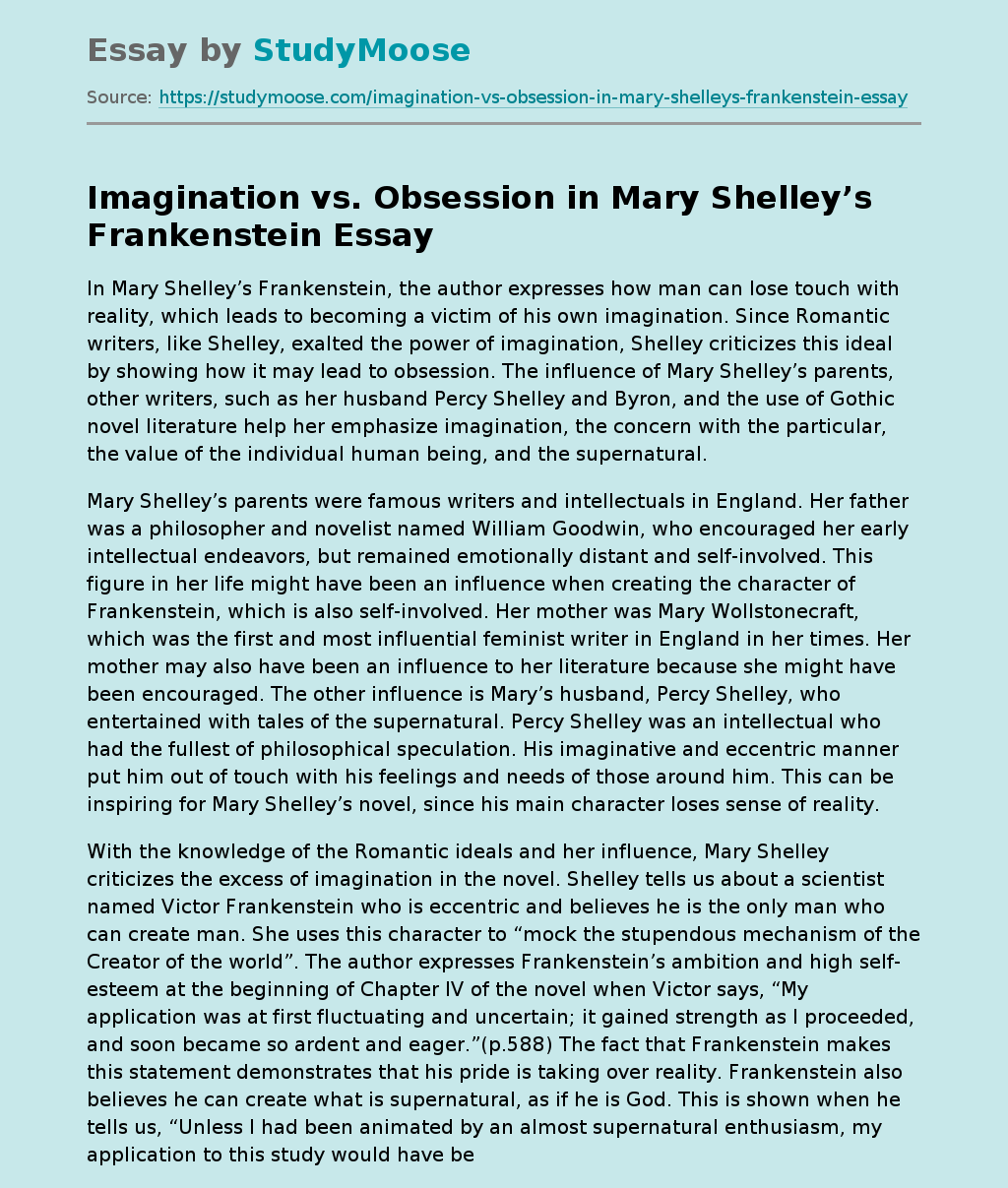