First person point of view in "Raymond's Run" and "Cathedral"

The authors of “Raymond’s Run” and “Cathedral”, both use a first person point of view in their short stories. In “Raymond’s Run”, by Toni Cade Bambara, the first person point of view shows how the narrator is dealing with the situations around her and maturing in the process. In “Cathedral”, by Raymond Carver, the reader can see the change in the narrator’s understanding of the blind man through different situations that happens throughout the story. Both authors have similar purposes in mind when they were writing the story, they both wanted to show the growth and transition of the narrators.

Turn in your highest-quality paper
Get a qualified writer to help you with
“ First person point of view in “Raymond’s Run” and “Cathedral” ”
Get high-quality paper
NEW! AI matching with writer

The use of the first person point of view makes it easier for the readers to see the thoughts and emotions that are being experienced by the narrator, which will give us a better insight into their thinking and actions.

In “Raymond’s Run”, the narrator of the story is Hazel, and the whole story is seen through her eyes.

Proficient in: Cathedral By Raymond Carver

In the beginning of the story, the reader finds out that Hazel looks after her older brother with a mental disorder. She does not mind looking after her brother, and she is also really protective of him because many people like to make fun of him and he also gets himself in trouble. Hazel’s protectiveness of her brother can be seen when Hazel says, “If anybody has anything to say to Raymond, anything about his big head, they have to come by me”. She is also a very boastful little girl, especially when it comes to her running, she thinks that no one can even come close to her running speed.

Her boastfulness can bee seen in the third paragraph when she says, “There is no track meet that I don’t win the first place medal”.

As the story moves along, Hazel bumps into a gang of girls that she does not really like and confronts them. She especially does not like Gretchen because Gretchen is Hazel’s main competitor. Then a transition occurs when Raymond is calling Hazel and “rattling the fence like a gorilla in a cage”. She realizes that she already has a lot of medals and ribbons, but Raymond has nothing, and also realizes that Raymond is a very fast runner who has the potential to become a winner. So, it does not matter if she wins, loses or ties the race because she can always retire and coach Raymond. Through the first person point of view, the reader can see the personal experiences that Hazel goes through, and how she came to understand that: winning was not everything, she should help others enjoy winning and she could gain respect for someone through competition.

In “Cathedral”, husband is telling the story from his point of view, which is in first person. The reader can see that in the beginning of the story, the narrator appears to be hostile and irritated because his wife invites her blind friend to stay for the night. The husband does not want the blind man to stay at his house because he does not understand the blind man and the blind man’s relationship with his wife. To alleviate some of his uneasiness, the narrator makes a brainless comment to his wife about taking the blind man bowling. Then, when the blind man comes, he asks the blind man which side of the train was he sitting on. Gradually, as the evening wears on, the narrator begins to relax with the blind man. They start drinking and smoking weed together, eventually the narrator turns on the television. 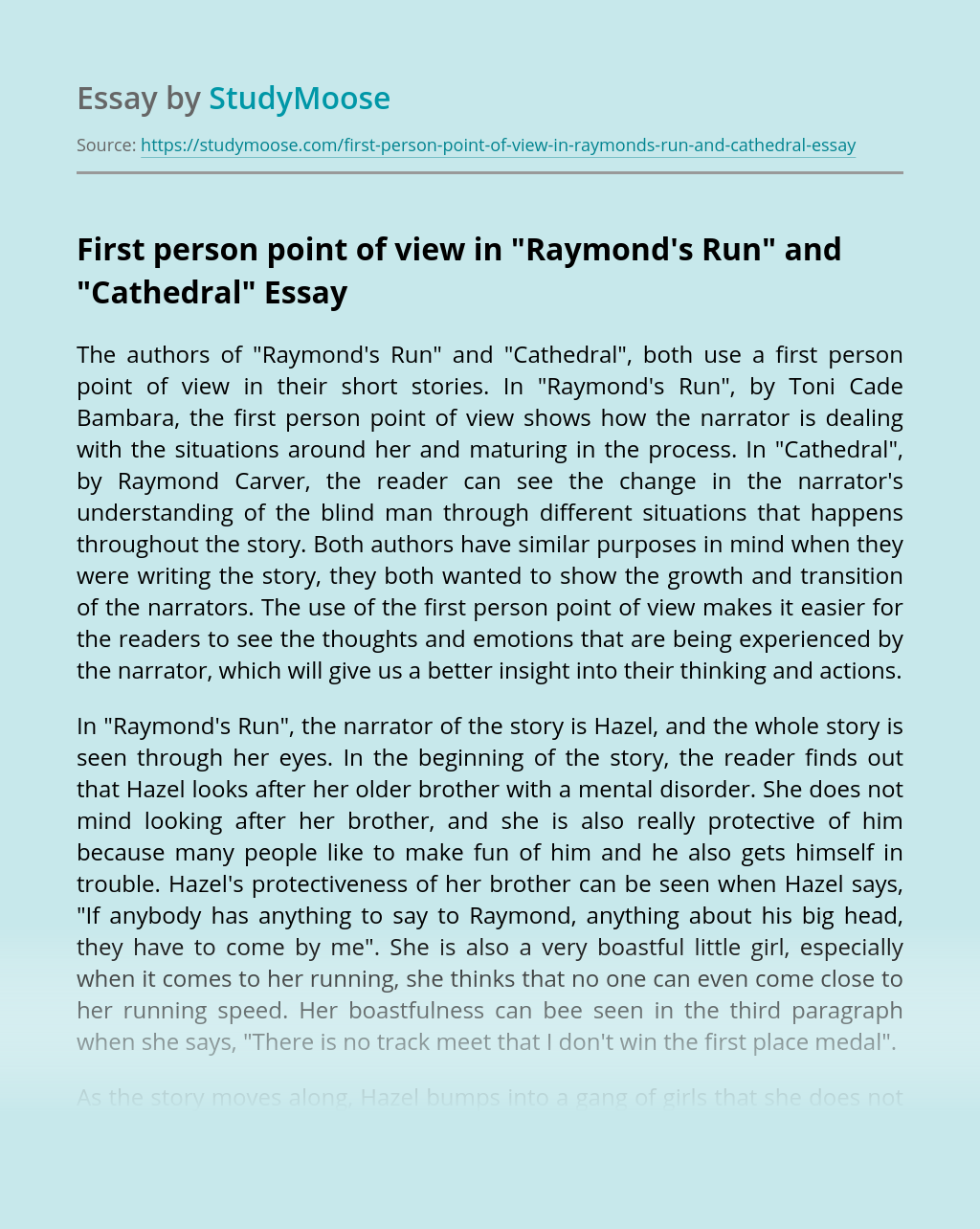 Turn in your highest-quality paper
Get a qualified writer to help you with
“ First person point of view in “Raymond’s Run” and “Cathedral” ”
Get high-quality paper
Helping students since 2015
Stay Safe, Stay Original