Don't use plagiarized sources. Get your custom essay on
“ Bible vs. Native American Creation Stories ”
Get custom paper
NEW! smart matching with writer

However much these two stories have in common, their differences are considerably stronger. One story places human above nature, while the other place animals above humans. The creation of humans is different, and the worlds in which human life began are unalike. The Bible and the Native Americans both value the importance of human life inversely. In the Bible, it is understood that God places the humans above nature,”…and let them have dominion over the fish of the sea and over the birds of the air, and over the cattle, and over all the earth…” (53).

The Native American myths say that the animals ruled over the humans, because in each myth the animals were the ones that could talk and reason and think for themselves. In the intro to the Native American Stories, it is stated, “Generally, these creation myths hold that life began below ground and that the first creatures were prehumen, insect-like beings.

Additional information that shows how unlike these stories are is how the human form looked when first created. The Native American myths tell of humans that were first created in a form/shape other than what anyone today would expect. The Zuni Emergence Myth says, “Their hands and feet were webbed and they had tails and no mouths or exits” (93). However, when God created humans he created them in his own image. In Genesis, Chapter one; verse 26, it says, “Then God said, “Let us make man in our image” (53). When God created humans, they needed no adjustments. In the myths of the Zuni, Hopi, and Navajo, the humans had to be cut in certain places and certain ways so that they could eat, work, and carry out daily tasks. The prime distinction in the story from the Bible and the myths of the Native Americans is where humans began their existence. In the Bible, God speaks of only one world which is earth. The Bible says, “God call the dry land Earth.”(52). With the Native American creation myths, all forms of humans began in the first of four worlds. In the Zuni Emergence Myth, “They were living in the fourth world.” (91). The Hopi Creation Story is similar as well. “

The Hopi Creation Story represents the first creatures as passing through four worlds…” (94). The Navajo Creation Story is like these two as well, only they fly instead of climbing through the four worlds. It is stated in the Navajo Creation Story, “Rather than climbing, as in the Zuni story, the Navajo Air-Spirit People fly” (95). When God created humans, they began life in the only one world, while Native American myths have humans go through extensive searches in other worlds before they come to the one they are to live in. The Bible creation story and the Native American myths both give credit to a higher being for their creation. This is probably as close to similar as these two stories come. However much these two stories have in common, the differences are stronger. One story places human above nature, while the other place animals above humans. The creation of humans is different, and the worlds in which human life began are unalike. They follow the same paths just different journeys.

Bible vs. Native American Creation Stories. (2016, May 15). Retrieved from https://studymoose.com/bible-vs-native-american-creation-stories-essay 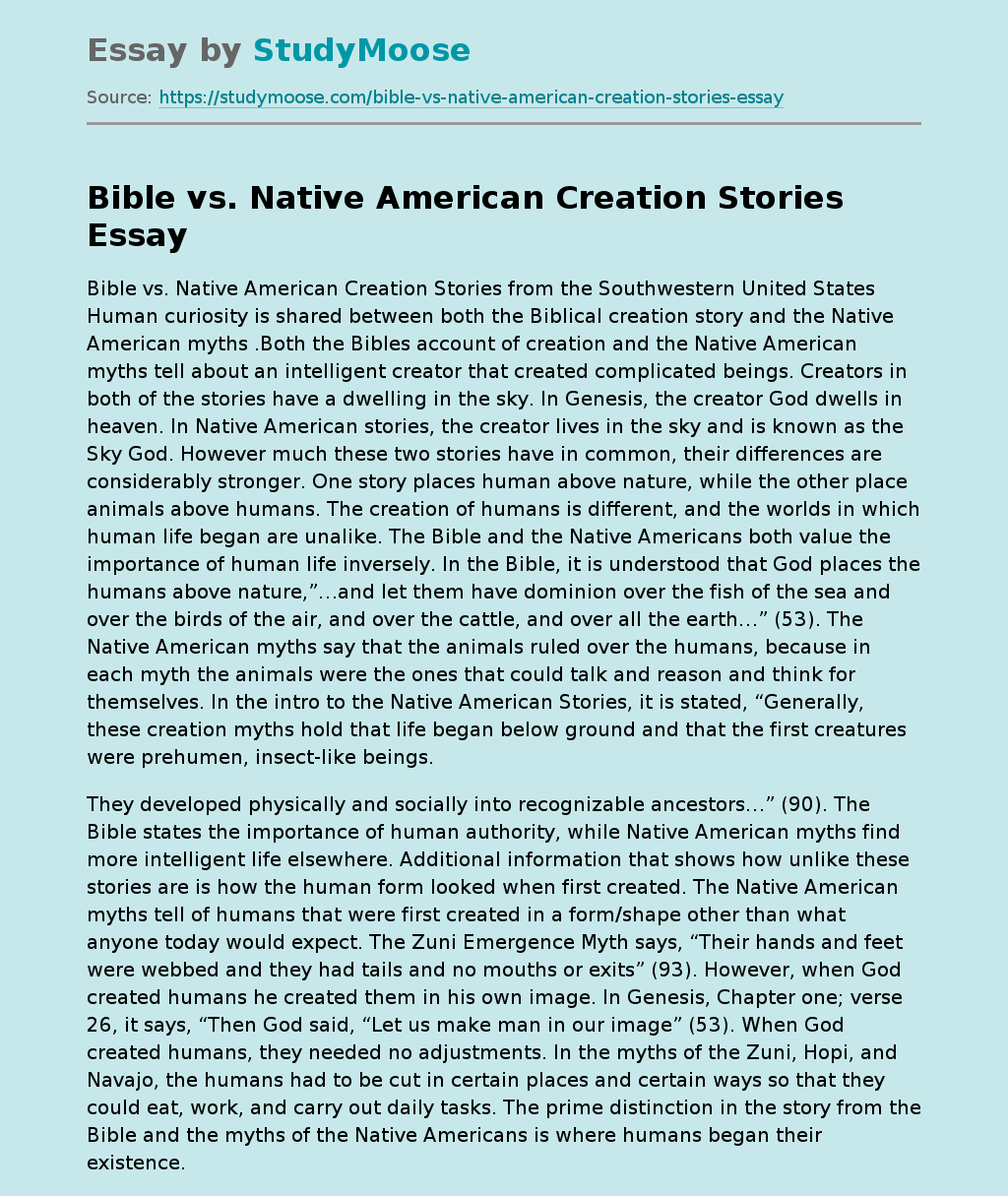