Novel Reading of The Pact by Sampson Davis

“The Pact” is a piece of nonfiction by Sampson Davis, George Jenkins, and Rameck Hunt it’s about three people grew up in the intercity and made a pact to go to college and become doctors. The theme of “The Pact” is loyalty because the novel demonstrates that quality in many ways. Being loyal means that you don’t turn your back on your friends, and that you will accept your friends for who they are and what they do. If someone is loyal they are faithful and they never give up on something if they truly love it.

Don't use plagiarized sources. Get your custom essay on
“ Novel Reading of The Pact by Sampson Davis ”
Get custom paper
NEW! smart matching with writer

Loyal also means that you are have good character, and try and help people in need.

This novel demonstrates loyalty because Sam, George, and Rameck all show that trait. They are good friends and will always have each other’s back, they never gave up and continued on through college until the end, and they have good character and help people in need.

The theme of “The Pact” is loyalty because Sam, George, and Rameck were loyal towards each other and never game up on each other. The three of them stayed with one another until the end, they went together through the hard struggles they experienced while becoming doctors. Whenever Sam, George, or Rameck were stressed or in trouble they would go to one another and lend a helpful hand or just someone to talk to. They learned from each other and benefited off each other’s strengths, they were loyal to each other.

For example, when Sam didn’t pass his exam he was going to quit and drop out after everything he has been through, but George and Rameck encouraged him to keep going and helped him whenever he need them. Also, when George went to dental school alone he relied on the study habits that Sam had taught him. In the book they shared notes and gave each other advice, for them communication was the key to continuing the pact and making their dreams come true.

Once the three of them realized they could actually become doctors they pushed harder and never gave up, and pursued on. They were faithful and loyal to their studies and the promise they had made with each other. George was determined to continue in his schooling even though Sam and Rameck went to another college. Rameck continued on when his Ma was sick, it was hard on him because he hoped he would be able to help but he couldn’t. Sam was persistent after he didn’t pass his state board exam, he studied more and focused more to pass the test the second time, he passed it the second time because he believed he could and was loyal towards the pact they made. In this book all three of them demonstrated a way in which they never gave up and stayed faithful toward their pact to stay with each other until the end, and become doctors.

In the novel the three of them believed in themselves as well as others, which made them respectful to other people. Sam, George, and Rameck all demonstrated good character and a positive attitude. Having a good attitude allowed them to find the good things in life, even if it got hard at times. I think that Sam, George, and Rameck all have a good character because of what they experienced on the streets. I think that is what made them realize that they wanted to make something out of their lives.

For instance, when George came home and was going to college by himself he opened up his house to anyone who wanted a safe place to go. When they started the Three Doctor Organization and tried to get kids of the streets and steer them into going to college, that shows that they are good people and want to encourage people to pursue a dream. Even through the tough times they can find the good in people and try to help them in any way possible. By people reading the book they wrote also shows that they want to help troubled youth, and want them to go to college and get off the streets like they did.

“The Pact” is a wonderful book to read, it teaches you to make something of your lives and be something special. It allows you to learn about how you stay focused and keep on pursuing your dreams. The theme of this book is loyalty because Sam, George, and Rameck are loyal to one another and helped each other until the end. They never gave up and were persistent to keep the promise they made to become doctors and stay with each other until the end. Also because Sam, George, and Rameck are kind to other people and loyal to them, and they encourage other people to make something special out of their lives.

Novel Reading of The Pact by Sampson Davis. (2016, Sep 16). Retrieved from https://studymoose.com/novel-reading-of-the-pact-by-sampson-davis-essay 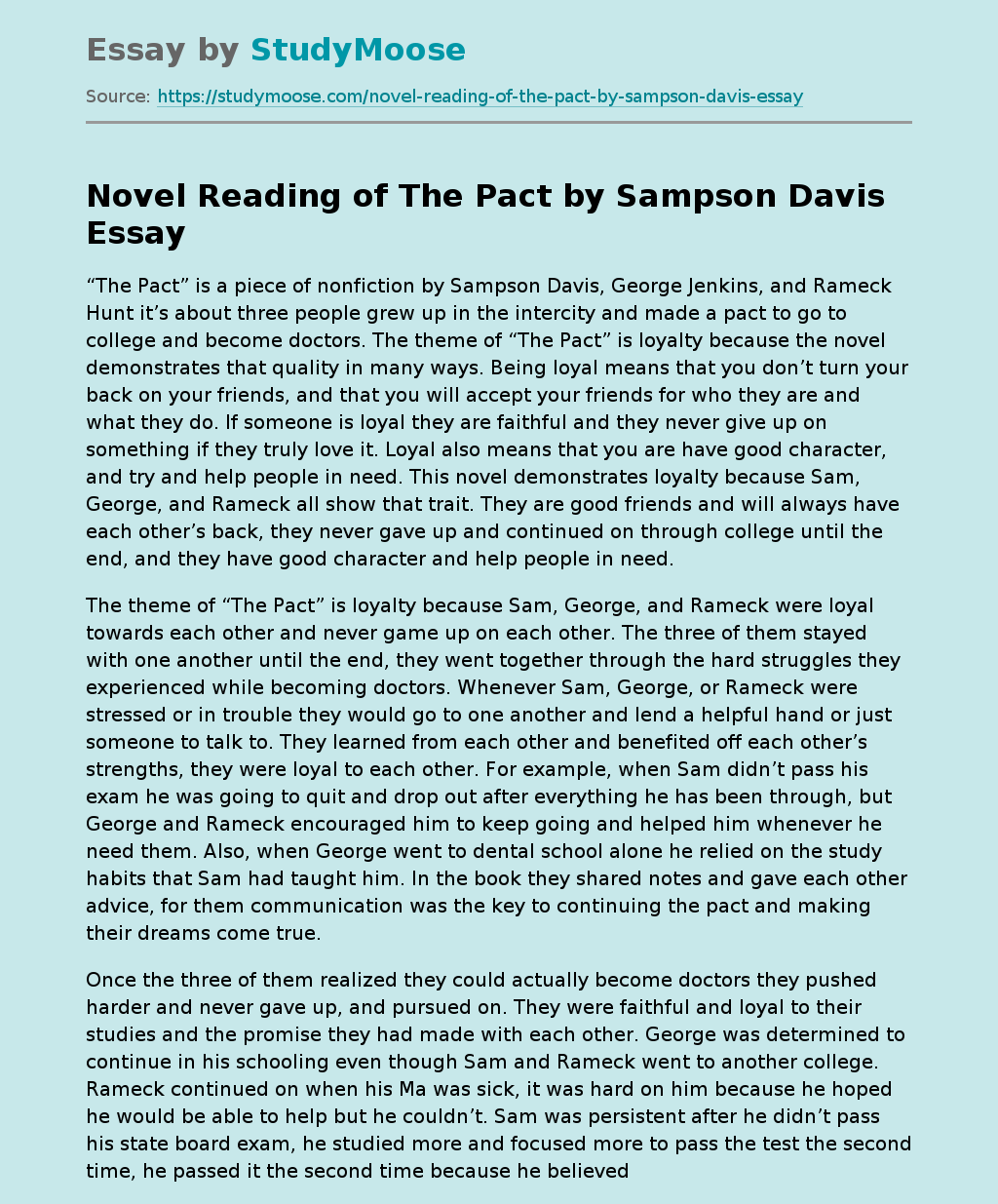