What would you ask for your newborn child if you could ask for anything? What would you sacrifice to get it? In the realm of fairy tales, subjects such as these are common catalysts for conveying life choices and the ensuing consequences. Each tale may relate to certain scenarios or social status of a specific gender, but one such tale—Godfather Death—can be related to by every walk of life. The subject that is contemplated by the Brothers Grimm is death and the power or lack of that a person possesses to control it (Grimm 233).

Turn in your highest-quality paper
Get a qualified writer to help you with
“ Godfather Death ”
Get high-quality paper
NEW! AI matching with writer

“See,” said Death, “these are the life-lights of mankind.

The large ones belong to children, the medium-sized ones to married people in their best years, and the little ones to old people. However, even children and young people often have only a tiny candle. ” This Grimm Brothers’ account of such a tale involves a father that is portrayed as a hard worker that can barely provide his twelve children the basic necessities of life (Grimm 230).

When he is informed he has a thirteenth child coming into the world, the father immediately seeks a godfather to make this child’s life an easier one than the previous twelve.

After reviewing his found choices of God, the Devil, and Death, he chooses Death as his son’s godfather. The father believes Death is the most unbiased and will provide equality to all. The son becomes of age and Godfather Death provides him a present that will make the life good for the now young man: He took him out into the woods and showed him an herb that grew there, saying, “Now you shall receive your godfather’s present.

I will turn you into a famous physician.

Whenever you are called to a sick person I will appear to you. If I stand at the sick person’s head, you may say with confidence that you can make him well again; then give him some of this herb, and he will recover. But if I stand at the sick person’s feet, he is mine, and you must say that he is beyond help, and that no physician in the world could save him. But beware of using this herb against my will, or something very bad will happen to you. “

The Grimm story, at this point, leads us to believe that the man’s father made a good choice in choosing the godfather as the young man becomes famous and wealthy by obeying Death’s instructions of the gift. Most parents would be happy with such results. As with most fairy tales, good fortune usually has a price to be paid. In the case of Grandfather Death, the price is not being able to pick and choose who can die and who cannot as the man finds out when he desperately wants a certain king to live and then the king’s daughter (Grimm 231, 232). The man finds just how true that fact is.

This is an interesting point to ponder and in my research I came across an article providing insight into the quality of life during the days of dying (CBSNews 1). So, is extending life a valid action if the quality of life is questionable? In the article, the following was discovered: “Families cannot imagine there could be anything worse than their loved one dying. But in fact, there are things worse. Most generally, it’s having someone you love die badly,” Byock said. A vast majority of Americans say they want to die at home, but 75 percent die in a hospital or a nursing home.

The article points out another fact of how much money is spent on prolonging death just a few days, weeks, months in some cases. I think it’s interesting that we tend to spend a lot of money avoiding the unavoidable. Quality of life? These are all good questions that a person will eventually consider. “What will I give up to stay alive a little longer? ” In the story, Death takes the man to see his candle that represents his life, which has become very short as the man decided to trick Death to let the king and the king’s daughter live.

The man finds his fate to be grim indeed, no pun intended, but the tale is most fitting as one that the Brothers Grimm’s retelling (Grimm 233). Perhaps the point that can be extracted from the fairy tale is that a person needs to accept the fact that death is inevitable and make the most of their allotted time given during a person’s life. I believe the contemporary saying of “life is short, make the most of it” is very fitting. The same message was being pondered then and is still consider an unavoidable subject, no matter how morbid.

Death is a timeless, unavoidable issue that eventually all must face. This story just tries to put it in perspective indirectly. The reader of Godfather Death is driven to consider just how precious life is by considering what’s coming at the end. Works Cited Grimm, Jacob. Grimm’s Complete Fairy Tales. Raleigh: Sweetwater, 2012. Print.. CBSNews. “The Cost of Dying. ” CBSNews, December 3, 2010. Web. http://www. cbsnews. com/8301-18560_162-5711689. html. 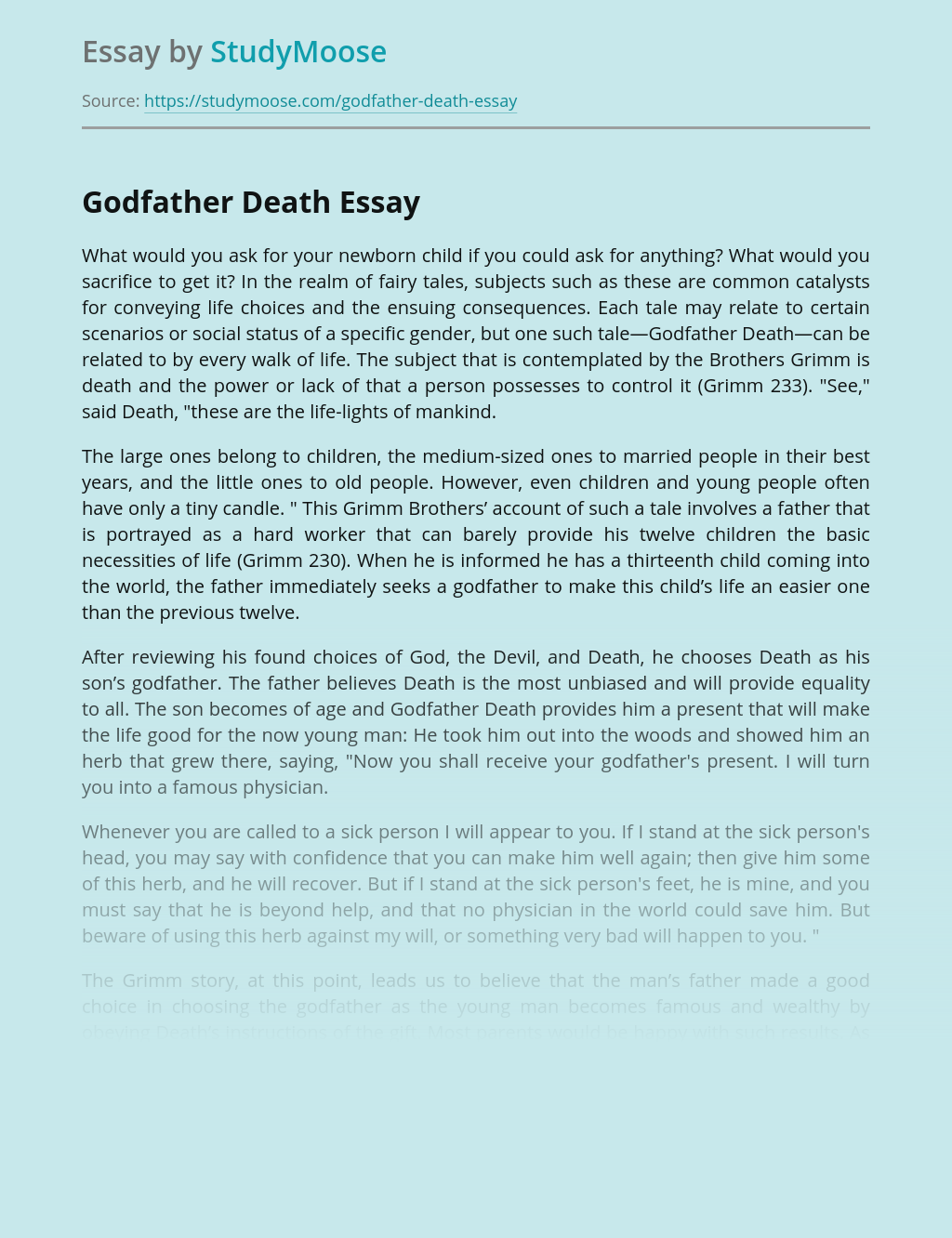 Turn in your highest-quality paper
Get a qualified writer to help you with
“ Godfather Death ”
Get high-quality paper
Helping students since 2015
Stay Safe, Stay Original