The Truth Under Fairy Tale: The Reflection of The Little Prince

The Little Prince, the book with most of the human emotions in the world, is just like my life story. Actually, I have read this book several times from the first time I got it at age of 10. The Little Prince, is a fairy tale for children, a fable for adults, a memoir for the old. The author is Antonine de Saint-Exupery from France. It was written in 1942 and published in 1943.

The author, Antonine, was an existentialist. The core thought of existentialism is the absoluteness of free responsibility, which fully affirms the role of the human beings as individual①.

Don't use plagiarized sources. Get your custom essay on
“ The Truth Under Fairy Tale: The Reflection of The Little Prince ”
Get custom paper
NEW! smart matching with writer

This concept is clearly reflected in the story, from the fox.

The existentialists are tend to visualize lots of emotions. The rose is the symbol of love; the King is just like the power; the drunkard is the shame… Everything in the story has its own feature. Alienation is the helplessness of life and the expression of confusion and is also a reflection of the absurd world.

The prince met a lot of people on other planets. They are alienated. At last, the little prince went back to the B612. He refused to be alienated and chose to be special in the universe. The little prince was actually really like the dream in human’s heart—he was persistent to be unalloyed. Only when we face extreme situations, the potential energy and the possibility of our life will be fully explored. Human will and dignity can be fully revealed. It is the hardest time in one’s life that makes his mind become strong and know what is the most necessary thing to chase.

There are many fantastic and beautiful images in the story. The rose, the fox, the star, all of them contain the emotions which can not be spread directly in that year and situation.

“It is the time you have wasted for your rose that makes your rose so important.” This sentence is one of the most famous words in this book. When the little prince came to the earth, he found there are too many same roses. He became so sad. After the fox’s words, he understood it. The rose in his planet, B612, was totally different from any of the others. The rose is the only one he spent so much time and moods. Just during the time the little prince cared the rose, he became knowing who he truly was. This kind of sincere emotion is the most important treasure in the world. It is the author’s key point. Love is the most supreme feeling in the whole world. The author talked a lot of things about love, but the responsibility of love is the most meaningful thing. In those days, the smoke of war is still pervading, and people can’t predict their future. Panic and helplessness make people only know self-preservation and lose their sense of responsibility. This made the story had a special social meaning.

The message spread from the star also has a very interesting meaning. The original text made me very emotional.

The star is people’s own future. Everyone has his or her own imagination about the future’s beautiful scene. For the little prince, his planet, B612, is different and wonderful because there is rose which he loves so much. Actually, dreams are out of reach. Everyone in the world relly need something to believe, which can support us during hard times. In the story, the author connected the responsibility with the happiness. He showed the point that when people take their duty and do what they should do, they can master their life.

The fact is that I did not know how to understand anything! I ought to have judged by deeds and not by words. She cast her fragrance and her radiance over me. I ought never to have run away from her…I ought to have guessed all the affection that lay behind her poor little strategems. Flowers are so inconsistent! But I was too young to know how to love her…”

The rose symbolizes love, responsibility and marriage. Love is understanding, inclusion, devotion, and giving. People should be understanding and compassionate in love. People are complex and contradictory. For the little prince, he and the rose loved each other, but he left.. Both of them understood that this kind of departure was eternal. After the little prince left, the rose’s life was very difficult. Although she was afraid of the wind, the cold and the tiger, she still said she did not need a cover. Under the delicate appearance of the rose is her deep love for the prince. The arrogance is the way to show that she regards the little prince as the closest person. But the prince was too young to understand her mind. Actually, this is also not the right way to show love in our century. In our world, most people are obtuse, which means it is very difficult for them to explore others’ hearts. Modern people do not have time, too. It is a poor shame but we can only accept it. As for the little prince, he knew that the rose could not resist these dangers, but he still chose to leave. But when the little prince saw more than five thousand roses in the earth, he felt all of the roses can not compare with the rose on his planet, which cost so much sweat and time. The true meaning of this love is giving rather than receiving, and when the individual gives something precious, he does not have the intention of requiring others to return. If you love someone, you should never be shy to hide because you two can be so easy to miss each other. the little prince did not know how unique the rose meant to him when he left B612, and we also could not know who is the right person in our lives when we fell in love with someone. All we can do is just to cherish every moment, especially this moment. Now is the best.

The little prince is everyone. Everyone’s heart had a flame when coming to the world. Just very little of us protect the fire carefully. They spend lots of time protecting the flame, especially during the thunder days. Surrendering to the world is the easiest thing to do. The prince is pure. He symbolizes the most original look of humans. The little prince is eager to communicate with others to understand others’ feelings. But this wish is always difficult to achieve. Communication can never deal with loneliness. On the contrary, it can bring too many barriers which make people totally find that everyone in the world is different from anyone else. Actually, that means we are lonely forever. In Western philosophy, the so-called ‘lonely individual’ means that the individual, is a subjective thinker, rather than just an emotional and sensitive person who is easy to be hurt②. When the little prince went back home, B612, actually he began to be alone again. but he is totally different from the person who did not understand love.

“What is essential is invisible to the eye.” This is the natural truth and secret. In our time, people are so busy and impetuous that we can easily be cheated by fake. In such an age, modern people live in a society of meaninglessness and the lifestyle is mechanized. Industrial civilization has taken people away from the truth, and their thoughts are mediocre. The main spirit of a human is stripped and loses its depth. This book, The Little Prince, is a calling for the authenticity of man. It reveals the main interpersonal difficulties of the modern human world. It reminds people that all adults used to be children in the purest way. The author added his unique life experience and value into the fairy tale to write the contemporary fable. Undoubtedly, these significances are also suitable in our century. People should protect the nature of spirit and cherish the people around, especially in the trouble.

The Truth Under Fairy Tale: The Reflection of The Little Prince. (2020, Nov 24). Retrieved from https://studymoose.com/the-truth-under-fairy-tale-the-reflection-of-the-little-prince-essay 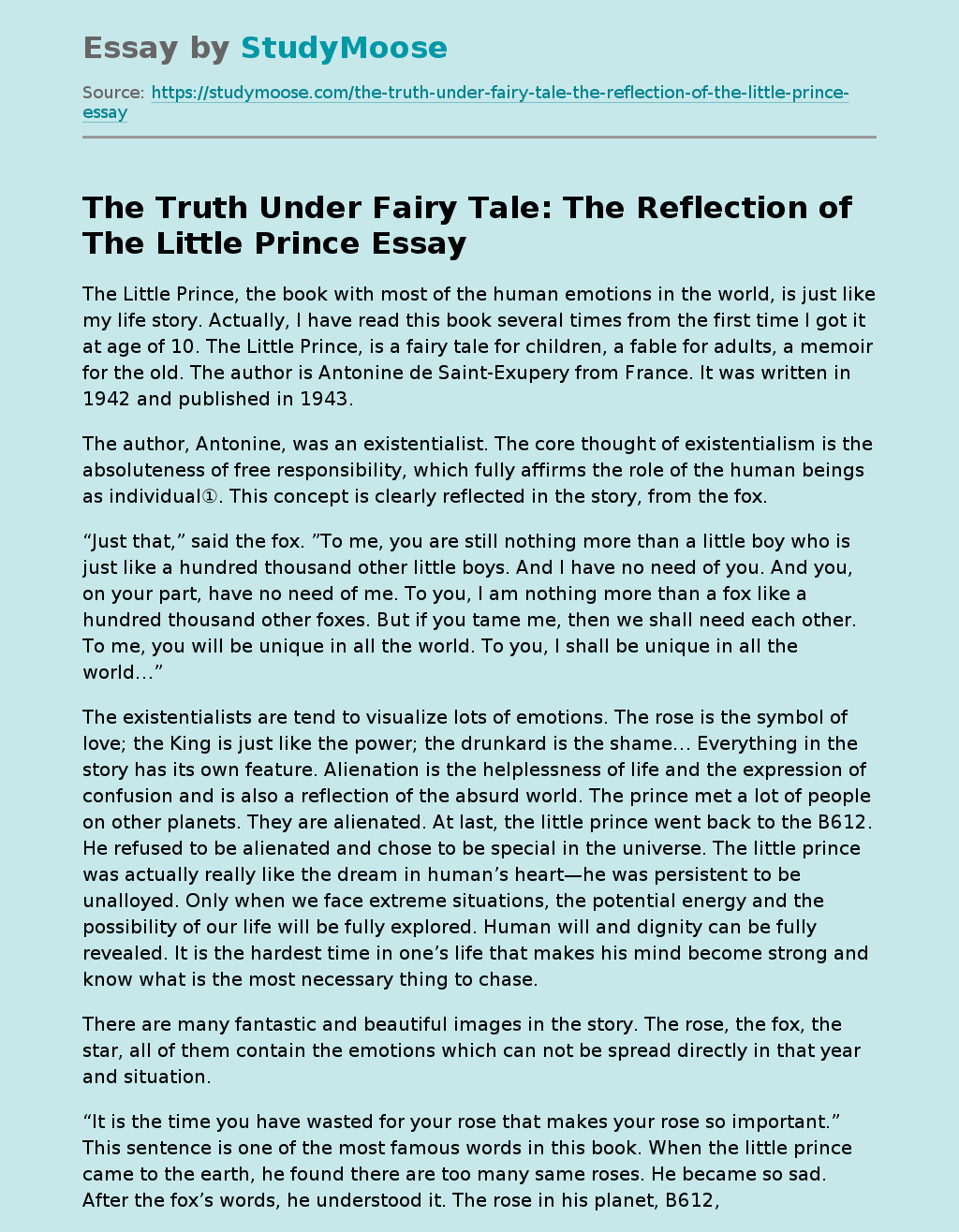