The Prince by Niccolo Machiavelli, and The Education of a Christian Prince by Erasmus of Rotterdam provide precisely opposite point of views regarding the conduct and purpose of princely rulers for effective government. Machiavelli discussed the qualities that applies to a prince so that he can maintain the best control of the power to which he has laid claim. For him, military power is one of the most important qualities a prince can have. He writes about it, saying: “… mong the cause of evil which being unarmed brings you, it makes you contemptible, which is one of those infamies against which the prince must guard himself… ”1 and “… a prince must not have any objective nor any thought, nor take up an art, other than the art of war and its ordering and discipline: because it is the only art that pertains to him who commands… ”

2 For Machiavelli, the ruler must always have the readiness to sustain political control by force.

Don't use plagiarized sources. Get your custom essay on
“ The Prince by Niccolo Machiavelli AndThe Education of a Christian Prince by Desiderius Erasmus ”
Get custom paper
NEW! smart matching with writer

He states that a ruler must be feared than loved, but not hated saying that “… prince must not care about infamy and cruelty in order to keep his subjects united and faithful… ”3 and that it is best for the ruler to listen to the needs and wants of the people because they will offer you the best protection in times of war and will best keep you in power if you do what they need and want.

A good ruler must know who to listen to and those are the very few that he must be sure of.

Machiavelli recommends that a prince should have good secretaries and ministers for you can tell the intelligence of a prince by the friends and secretaries he has.

An ideal ruler according to Desiderius Erasmus puts emphasis on virtue and moral principles above all. Unlike Machiavelli, Erasmus believes that the prince must always act in the best interest of his subjects. He writes about it, saying: “It is the duty of a good prince to consider [Surname] 3 the welfare of his people, even at the cost of his own life if need be… ”4 and “… the power should be entrusted to him who excels in all the requisite kingly qualities of wisdom, justice, moderation, foresight and zeal for public welfare.

5 He stresses the importance of the ruler’s knowledge and wisdom as he govern to serve the people. Unlike Machiavelli, Erasmus believes that war brings misery to the prince’s subjects so that in the interest of his people it should be avoided, saying that “… although the prince will never make any decision hastily, he will never be more hesitant or more circumspect than in starting a war; other actions have their different disadvantages, but war always brings about the wreck of everything that is good, and the tide of war overflow with everything that is worst; what is more, there is no evil that persist so stubbornly. In my opinion a ruler must possess a combination of the qualities that Desiderius Erasmus and Niccolo Machiavelli described in their books. I agree with Erasmus that a ruler must always act in the best interest of his subjects, if only our present rulers will follow that belief there will be no corruption in the government for they will not prioritize their own self-interest.

Like Machiavelli, I believe that it is important for a ruler to have good secretaries and ministers for they will help the ruler run a good government provided that they themselves are not pursuing their own self-interest. For me, military power is important but not to be used in sustaining political control nor for territorial expansionism. A government must have enough military power and readiness to protect its sovereignity in case other government turn against them and war is inevitable.

The Prince by Niccolo Machiavelli AndThe Education of a Christian Prince by Desiderius Erasmus. (2020, Jun 02). Retrieved from https://studymoose.com/prince-niccolo-machiavelli-andthe-education-christian-prince-desiderius-erasmus-new-essay 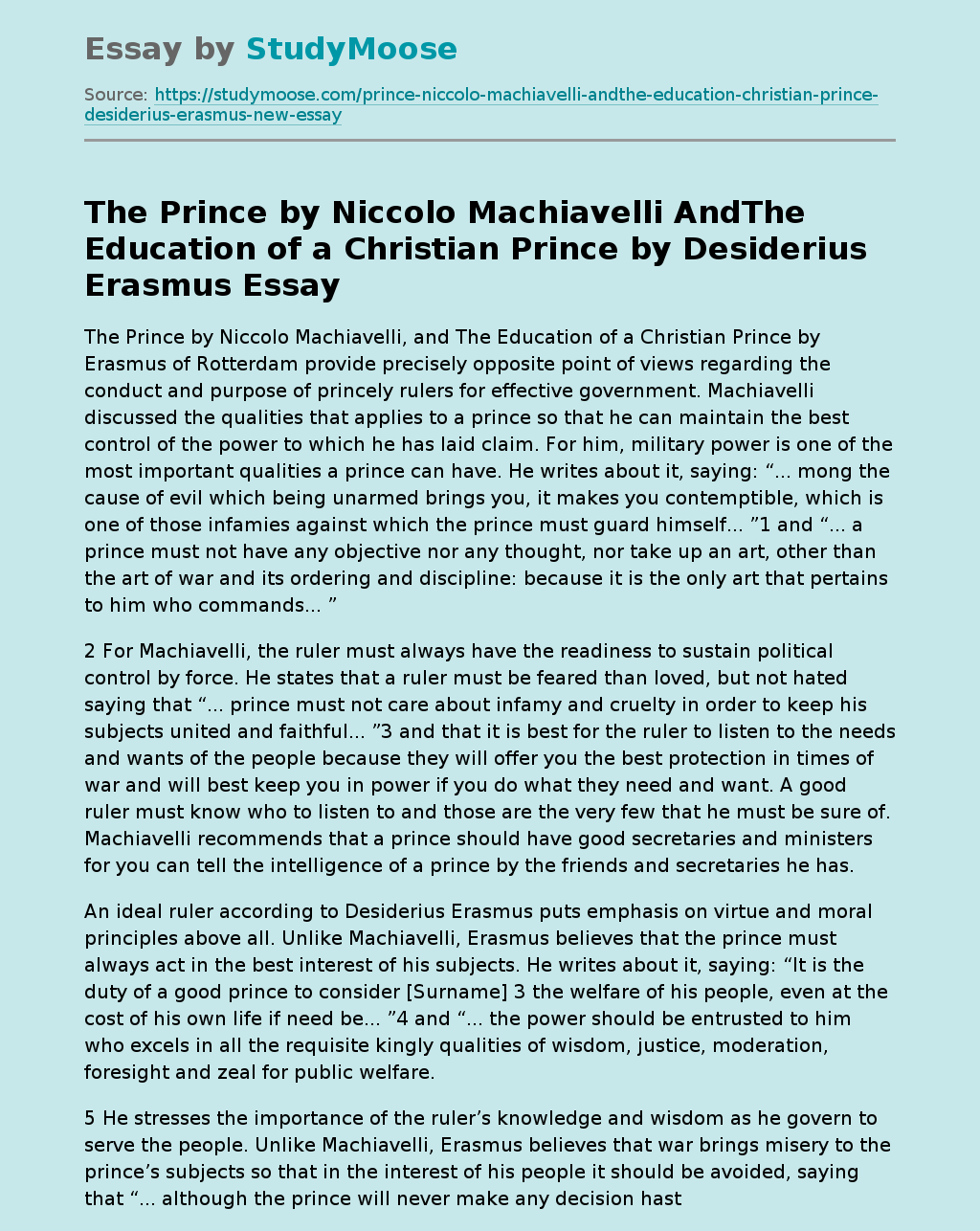