Prayer is a way of communication between me and God. It allows me to talk to Him and listen to Him so that I can establish a closer relationship with Him. As I went about my CLE classes, I learned that there were proper ways and intentions that are needed in order to make the most out of prayer, thus I reflected on my prayer life to see if I was praying according to the 4 keys.

First, I evaluated Rico’s prayer life since it is by doing this that I can better evaluate my own prayer life.

Turn in your highest-quality paper
Get a qualified writer to help you with
“ Christian Life Education Reflection Paper ”
Get high-quality paper
NEW! AI matching with writer

Rico prays to God whenever he needs help like during tests, and he does good deeds in order to make sure that God will answer his prayers. Whenever he doesn’t need Him, he doesn’t set time for prayer since he believes that studying is already a form of prayer. How one sees God affects how he relates to Him. In Rico’s case, he sees God as a vending machine.

In vending machines, buyers insert money into the machine and in return, the machine gives the product the buyer desires. Rather than seeing God as a God who loves unconditionally, he sees God as someone who demands that he do good deeds in order for Him to grant the petitions of Rico. Rico promises God to stop cursing, to stop backstabbing and goes to mass whenever there are tests because he believes that God demand he does these good deeds so He will answer Rico’s prayer.

Just like a vending machine, Rico believes he needs to give “money” or good deeds in return for the “product” or petition he wants.

Ideally one should see God as an unconditional lover, who loves us despite flaws, since this allows the person to approach God with trust, honesty and love, making the relationship more real and genuine. Instead, Rico doesn’t believe in God’s unconditional love since he chooses to do good deeds to please love and make God love him. In reality, we shouldn’t do good to receive God’ love but we should be open to God’s unconditional love, which will then motivate and transform us to do good. How one sees himself also affects the way he relates with God in prayer since how we see ourselves shapes how we think others see ourselves. If we see ourselves as lovable, we will be open and honest since we know that the other person will love us the way we are. If we see ourselves as unlovable, we will be false and unreal since we will probably hide our true self to make others like us more. Rico’s image of himself is a mixture of both. He sees himself as lovable by God only when he does good deeds and religious acts. He does these acts to please God and to assure himself that God will answer his prayers since he believes that doing these acts make him lovable by God.

Rico doesn’t see himself as lovable when he indifferent towards others and when not doing good deeds. Because of this, he doesn’t find time to pray to God when he doesn’t need help or do good deeds. One assumption is that Rico is ashamed of the cursing, backstabbing and other bad deeds he has done, so he distances himself from God because he feels unworthy of his love. He only prays to God when he promises to do good deeds, so he probably thinks he is not worth listening to by God unless he does good. This will have a negative effect on his relationship with God since he chooses to distance his messy self from God rather than pray to God to improve their relationship because he feels unworthy due to his flaws and doesn’t think that God has unconditional love for him. Instead of all the prayer time he could have spent with God, he misses out on it because of his wrong perception of God and himself.

Reading Rico’s sample prayer, I’m not entirely sure if he is honest with God. He appears to be buttering God up so that God will grant his petitions. He tells God he promises to stop cursing and backstabbing, yet he goes back to his indifferent ways during regular school days. For me, it doesn’t seem that he seems sincere in what he is saying, so his relationship cannot progress and remains shallow. He should focus more on expressing what he really feels in order to break down barriers with God and in order to make the relationship with God more real and intimate. Rico also has a hard time integrating prayer with daily life. Rather than making everyday an opportunity to pray to God, he only prays to God when he needs him. This is similar to a relationship with a doctor, wherein one goes to the doctor for his services only without establishing a personal relationship with him.

Rico only goes to God when he needs something and doesn’t attempt to establish a personal relationship with him. Occupational prayer is about recognizing God’s presence in daily tasks, but Rico doesn’t do so since he only seeks God when he needs him. Other than those times, he studies and remains indifferent towards others, thus he doesn’t recognize God’s presence unless he needs Him. Spousal prayer is resting from work in order to be totally available to God. “My work is my prayer” is not an excuse since we all need to spend at least 15 to 20 minutes everyday to talk to God alone, which will deepen our relationship with him and make occupational prayer more meaningful. Rico is “busy” and believes that studying is a form of prayer, thus he doesn’t make time daily for spousal prayer, which prevents him from deepening his relationship with God. Rico doesn’t listen to God often during prayer. Prayer is irrelevant when one dominates the stage and keeps talking and asking for favors from God. Prayer becomes relevant when we use it to listen to God in order to discover what he wants us to do. Often times, what God has to say to us is more important that what we have to say to him, so we must be selfless enough to give him the stage and reflective enough to learn his message.

In Rico’s case, he always dominates the stage by praying only to ask for petitions. He doesn’t listen to what God wants of him and only prays for his own personal intentions rather than praying to improve his relationship with God. Rico needs to become more selfless and put what God’s trying to say over what he’s going to say. By listening along with talking to God, prayer becomes a two-way communication, which allows his relationship to flourish with God. 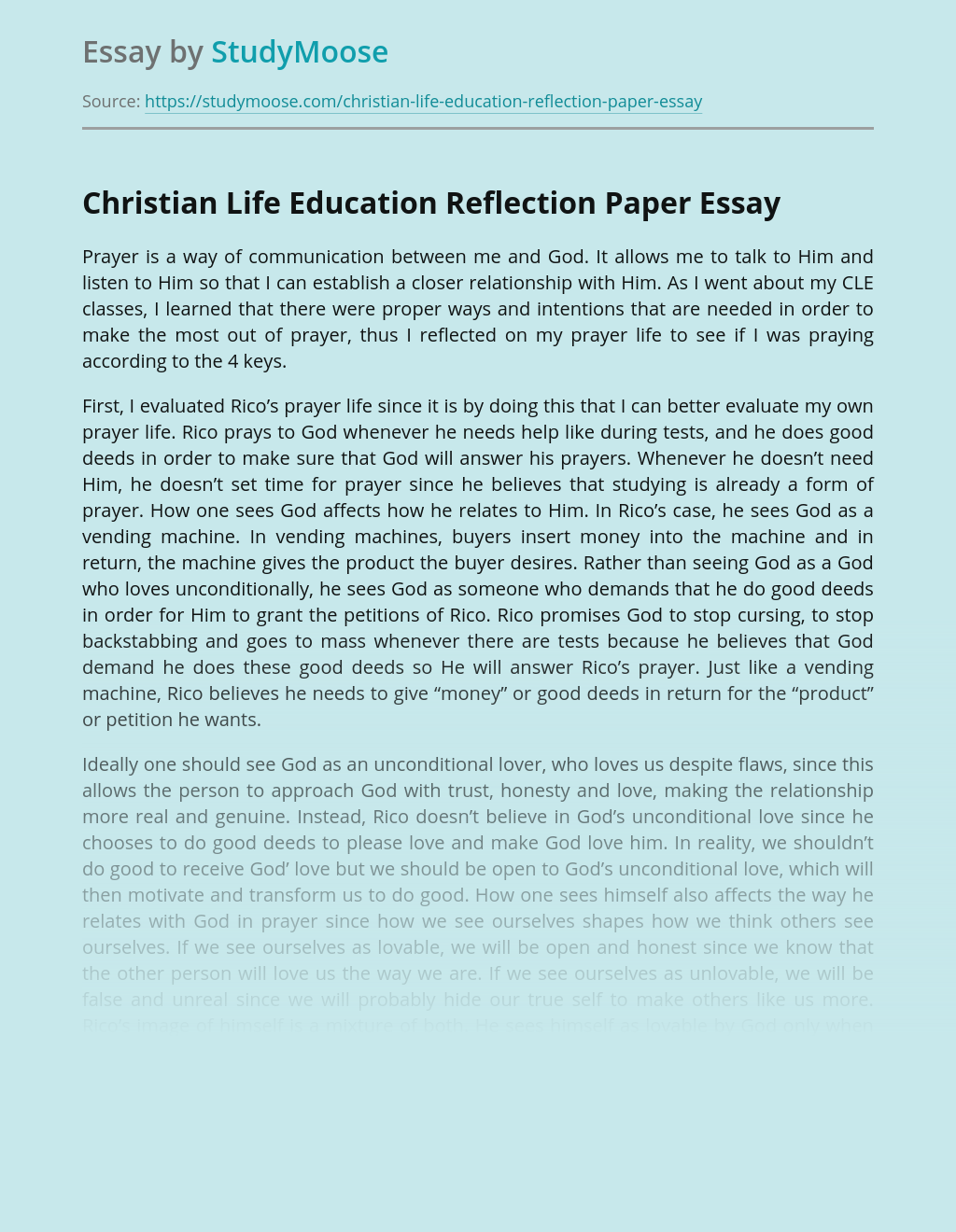 Turn in your highest-quality paper
Get a qualified writer to help you with
“ Christian Life Education Reflection Paper ”
Get high-quality paper
Helping students since 2015
Stay Safe, Stay Original