The word “addiction” has many associations: drugs, alcohol, food, and sex, but being addicted to our cellphones is not something we think of in the same manner. Cell phone addiction rehabilitation centers are not available like they are for other forms of addiction, and there are no physical signs of health deterioration, creating the misconception that cell phone addiction is a myth.  Before conducting my research, I thought it inconceivable that people could be addicted to cellphones, but the evidence found shows otherwise.

Don't use plagiarized sources. Get your custom essay on
“ A Technological Crisis: Cell Phone Addiction ”
Get custom paper
NEW! smart matching with writer

The convenience and practicality of cell phones can encourage addictive overuse of such devices.(Kawahara and Ito 188)  Cell phones are appealing because they provide immediate access to communication and a less intimate method of interaction for those who struggle with social anxiety. Individuals who experience social anxiety tend to be more compulsive smart phone users because texting people, rather than face-to-face interaction, gives the individual suffering from social anxiety an escape from the feeling or belief that they are constantly being “evaluated or scrutinized.

Texting also allows more time, and therefore thought, to be put into each response, as well as decreasing the anxiety that personal interactions cause.(Sapacz et al. 2015)  This statement illustrates the reasons people develop an addiction to their cell phone. If these devices make life easier, why wouldn’t we carry them everywhere and constantly use them? Cell phones do not always decrease anxiety, younger individuals regularly rate the possibility of no cell phone access as anxiety provoking according to Sapacz (154).

The excessive use of cell phones has negative impacts on psychological well-being.

Researchers have found that the absence of a phone leads to increased anxiety and discomfort.  This type of anxiety is known as nomophobia or situational anxiety, which stems from a ‘fear of missing out’.  The anxiety or “fear” is due to being emotionally attached to the devices.(Kawahara and Ito 189; Lee et al. 361)  The individual’s attachment is demonstrated by the actions they perform, such as sleeping with their cell phones and texting or calling while driving.  It is possible the anxiety is present because the cell phone is seen as more than a form of communication, but as a “continuous connection to the wider social world” according to Sapacz (155).  Recent studies have found a connection between intensive cell phone users and impulsive behaviors, pathological dependence, low emotional stability and self-esteem, chronic stress, depression, and sleep disturbances.(Hadar et al. 2)  These connections between intensive cell phone users are the same psychological connections between other forms of pathological addiction.

Aside from the psycho-emotional effects, cell phone usage has negative effects on cognitive functioning as well.  Recurrent cell phone use is reported responsible for poor academic attainment.  Individuals who frequently media-multitask have clear difficulties in cognitive functioning when engaged in multiple streams of information (Hadlington 76). According to Kawahara (190), a negative correlation has been found between the amount of text messaging and social networking engaged in via cell phones and academic achievement.  Kawahara states, excessive cell phone use during class or lecture often leads academic disengagement by surfing the Internet, checking their social media accounts, texting during class time, contacting friends, or exploring new apps.  These nonacademic uses of their cell phones have proven to be detrimental to the learning process, the students’ well-being, and their grade point average.

Smartphone use rapidly impairs arithmetic numerical processing capacity, increases impulsivity, and impaired attentional functions.  By participating in these nonacademic uses of their cell phones, students take their attention off the classroom lecture and lesson.  In doing so, the information presented is not properly stored, resulting in poor retention of the material.  According to Lee (360), at least 30% of information presented in class is lost when a student is texting during a lecture.  Kuzenkoff and Titsworth (qtd. in Lee 360) stated that recurrent texting during class resulted in less note taking, leading to lower test scores.  This attention shift leads to decreased participation within the classroom, impaired ability to distribute study time outside of class, and prevents the student from optimizing learning.  Now imagine if this was the case for a majority of the students. The distracting effects of cell phone use during class do not only affect the user, but also students around them not using their cell phones. The attention shift is due to the skill development of cell phone use, which seems to have changed the ability of the individuals to clearly focus their attention and block out unwanted material.  Individuals who excessively use a cell phone, lack the ability to prevent breaks of attention away from the current focus, therefore becoming predisposed to major lapses in tasks where continuous attention is required, such as a lecture or classroom. Being exposed to such experiences could promote more issues of addiction and dependency to their cell phone.(Lee 360; Hadlington 76)  Cell phone addiction is not only affecting attention in the classroom, but outside it.

According to Hadlington (76), individuals engaged in problematic Internet or cell phone use have problems related to impulse control and attention deficit hyperactivity disorder.  The research suggests that underlying behavioral disorders could provide a prediction for the individuals’ proneness to excessive Internet use.  He also noted that pre-existing deficits in cognitive function are related to the frequency of the Internet or cell phone use. Individuals who have cognitive function setbacks are often more exposed to Internet use addiction than those with complete cognitive function.  This information shows that addiction to cell phone or Internet use does not affect everyone, but does pose a danger for people with underlying behavioral or cognitive deficits (Hadlington 76).

Researchers have found that during internet-based searching studies, people who excessively use cell phones still demonstrate a level of brain activation “that was on par with that experienced at the point of insight”, according to Hadlington (76).  The point of insight is the top peak of brain activation during the activity.  This finding suggests that the activities excessive cell phone users engage in are continually presenting to be a mentally stimulating activity even though they have an abundant amount of experience completing these actions.  This pattern of brain activation, where the stimulation constantly remains high, hints towards why engaging in Internet-based activities can be so attractive and rewarding, it brings forth a possible pathway to addiction.  These brain activation patterns highlight the sensitivity the brain has to the use of computer-based technologies and suggest the use of such could have a detrimental impact in terms of an individuals’ attention span (Hadlington).

The research above proves that cell phone addiction does exist. Social anxiety, cognitive deficits, skill development of cell phone use, and many more all contribute to the existence of the addiction.  Some of the symptoms seem more reasonable than others, but they all have detrimental impacts on the human mind, and our personal and interpersonal activities and interactions.  To combat cell phone addiction, start by limiting cell phone usage little by little and find a hobby that is enjoyable.  Engage in face-to-face interactions with other people who share the same interests. By engaging with people who enjoy the same things, it can eliminate the social anxieties of interacting with others because individuals won’t have to stress over their responses, they’ll be able to speak about their interest openly and freely to someone else who feels the same way. 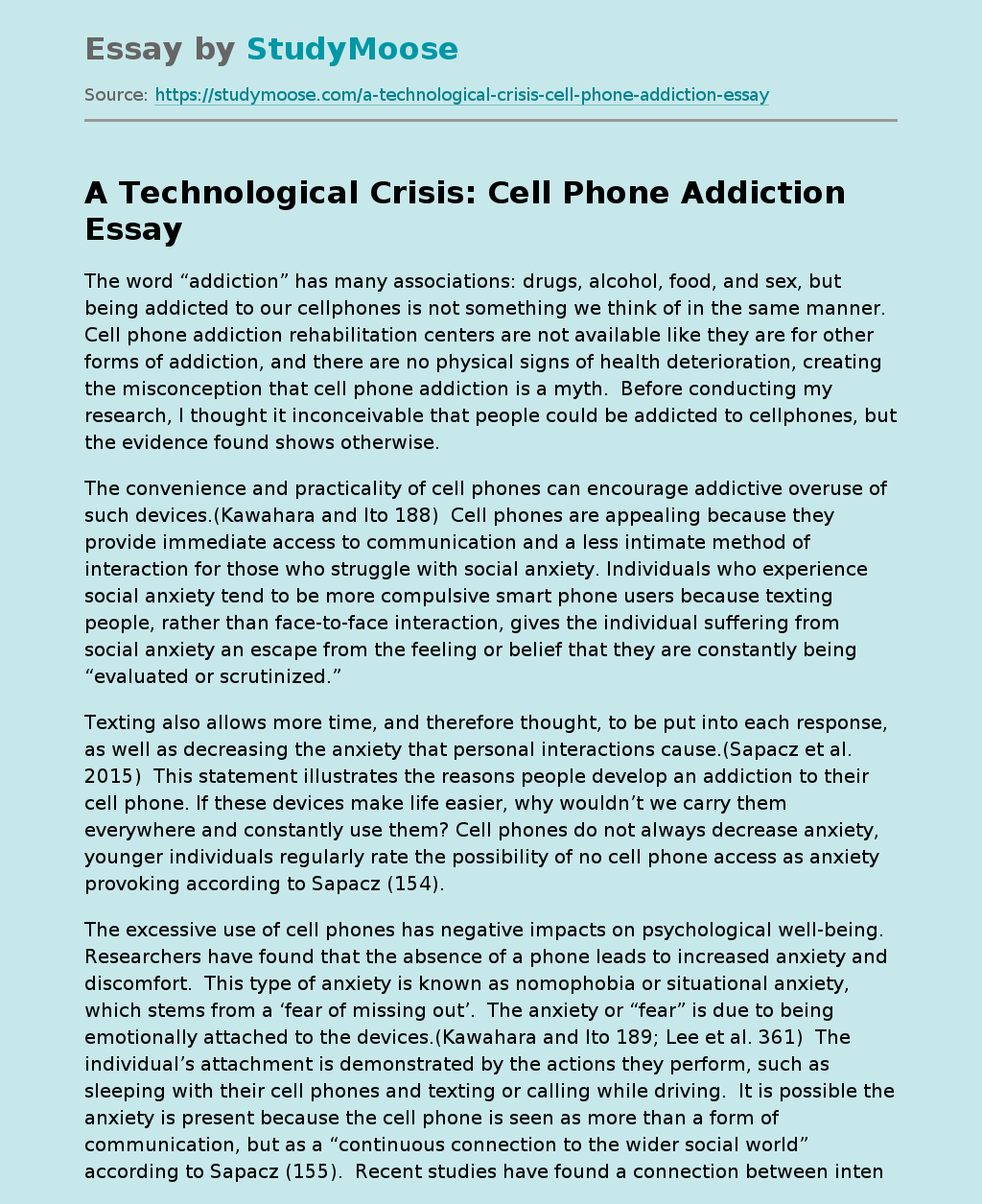