Just like an old saying, introduced by Roman philosopher Seneca, To be anywhere isto be nowhere (196). Nowadays, the smartphones and internet provide everyone anaccess to obtain information around the world without walking out of the house. However, reflected by the growing number of people who own one or moresmartphones, some of them gradually realize that the smartphones have become one ofthe necessities in their daily life, what’s more, some phone users have to check theirsmartphones again and again with no reason, especially in adolescents this kind ofphenomenon is common.

Don't use plagiarized sources. Get your custom essay on
“ What Mobile Phone Addiction Can Do? ”
Get custom paper
NEW! smart matching with writer

According to Lisa Merlo, cell phones make modern life moreconvenient but, they gradually influence the lives of phone owners who cannot controlthemselves to stop using smartphones. (195)

In this case, the smartphone becomesproblematic for some of phone users, which means they have been addicted tosmartphones. But what smartphone addictions can do or what the effects it can bring tophone users? Smartphone addiction will severely affect people’s lives even health,particularly for teenagers, in generally associated with negative feelings such as anxiety,depression and stress (Hawi, Samaha 52), distracting attentions (Carr 196) and alexithymia (Hao, Jin, etc.

Firstly, according to the paper Addicted to Phones, April. F. B. states that thephone addiction has become a serious problem and interfere people’s lives severely. Cell phones were created to make modern life more convenient but, they also broughtaddiction, which is one of the most common problems back. The phone addiction unlike Ano Hao 20161415220022 addictions to alcohol, dugs or gambling, it can be hard to pinpoint problematic cellphone use (Bridwell 195).

However, if the phone addiction truly becomes problematicfor those who cannot live without smartphones, they will suffer severer anxiety anddepression than alcohol or gambling addiction (Merlo 195). In order to get moreinformation about the effects or symptoms of phone addiction, a Japanese group didsome research and revealed that children with smartphones usually have no willing tomake friends with their peers.

In addition, an Italian study also shows that more thanone quarter of adolescents owned multiple phones and many of them were typicallyaddicted to their phones. According to Merlo, Those things lend to the idea that maybethis is an addiction, but maybe it’s manifesting in a little bit different way than youwould think of a chemical substance (196). Also, addiction causes changes in brain,UF studies have shown, even eating and other behaviors have been shown to producethe same effects in the brain as drugs and alcohol in some people.

Although manyproblems in frequent usage of smartphones have been pointed out by some experts,researchers so far cannot ensure whether a bad habit of using cell phones associatedwith phone addiction (Birdwell 196). For now, the most efficient advice proposed by Merlo for those who have problems of addiction of smartphones is downgrading thescale of the phone to a basic phone with fewer features and setting limits about where and when to use the phone (196).

The concerns of phone addiction seem to focus around one main concern: phoneaddiction has nearly the same behavior of alcohol or drugs addiction but cannot beeasily pinpointed by the main reason of phone addiction. According to Leung’s research, is defined as the disordered capabilities to control impulsiveemotions without the impact of intoxicants (51). Lisa Merlo, an assistant professor ofpsychiatry in the UF College of Medicine claims that the UF studies have shown thatthe addiction causes changes in the brain, even eating and other behaviors have beenshown to produce the same effects in the brain as drugs and alcohol in some people(196).

However, it is hard to consider that cell phone addiction just come fromproblematic usage of cell phone since almost everyone has a cell phone and uses itregularly (Merlo 195). In addition, Merlo also said that it’s this need to be connected,to know what’s going on and be available to other people. That’s one of the hallmarksof cell phone addiction (195). The research performed by a Japanese science grouprevealed that mobile phone addiction would cause insomnia and interfere sleep qualitieseven some physical impairments which would directly result in bad emotions or feelingfor phone users especially for the young users (Hardell, Carlberg, etc. 52). Finally, itwas clear that cell phone addiction will severely influence people’s daily life even health.

Additionally, as Nicholas Carr said in Does the Internet Make You Dumber theinternet grants us easy access to unprecedented amounts of information (197). However,it also pointed out that a growing body of scientific evidence suggests that the Net isalso turning us into scattered and superficial thinkers (Carr 197). In Carr’s opinion, thecommon thread among these disabilities is the division of attention since peoplenowadays may be continually distracted by emails, alerts and other messages (197). Hesaid that When were constantly distracted and interrupted, as we tend to be online, our brains are unable to forge the strong and expansive neural connections that givedepth distinctiveness to our thinking (197). According to Patricia Greenfields research, different media technologies influence our cognitive abilities for example visual literacy skills (198).

However, every medium develops some cognitive skillsat the expense of others (Greenfield 198). In another experiment, the researchers weresurprised by the result which shows that the multitaskers perform poorly on all the tests. Therefore, it is revealing, and distressing, to compare the cognitive effects of theinternet with those of an earlier information technology, the printed book unlike thescreen, the page promotes contemplativeness. (Carr 198). All in all, to read a book isadifferent way compared with internet. It is to practice an unnatural process of thought,which require people to place themselves into a completely peaceful environment to think (Carr 198).

Among this article, the major problem with the internet is that the internet placespeople into an environment where they will be interrupted continuously. According toCarr, When were constantly distracted and interrupted, as we tend to be online, ourbrains are unable to forge the strong and expansive neural connections that give depthdistinctiveness to our thinking (197). The internet or media will distract people sattention and interrupt them when some tasks have to be done. As the experimentperformed by Stanford University, the researchers gave various cognitive tests to 49people who do media multitasking and 52 people who multitask much less frequently,the result of this experiment shows that even all of the media multitaskers performedvery poorly compared with others, which shows that the internet really distract people’s attention seriously (Carr 197). In addition, Carr also states that Reading a book is topractice an unnatural process of thought. It requires us to place ourselves at what T. S.

Eliot, in his poem Four Quartets, called the still point of the turning world (198).

This statement means that reading can promote people into a peaceful situation andconcentrate on one single task which is helpful and beneficial. All in all, reading a longsequence of pages helps readers develop a rare kind of mental discipline, which iscrucial and beneficial for modern citizens (Carr 198).

Alexithymia refers to thedifficulties an individual experience when identifying and describing emotions in selfand others and distinguishing between feelings and bodily sensations and the externallyoriented cognitive style (Taylor, Bagby and Parker 280). As research performed bySchimmenti, the mobile phone addictive behaviors were observed as strong predictorsand alexithymia displayed significantly connection with internet and phone addictions.

Because some exclusive features of mobile phones such as portability and somehandy applications have made them a good choice for alexithymic individuals whostrongly counted on the internet and cell phones with less interpersonalcommunications (Huang, Ma 54). According to the China Internet Network InformationCenter report, until the end of June 2018, 98.3% internet users preferred to use mobilephones to access the internet and the ratio is still rising currently (China InternetNetwork Information Center 24). In summary, the study examined 847 Chineseundergraduate students and found alexithymia predicted mobile phone addictiondirectly and indirectly via patterns of entertainment and transaction. This study broughtnew light on relevant studies and enhanced our understandings (Hao, Jin, etc. 58).

In conclusion, the phone addictions can severely influence people’s daily life andit may cause some bad feelings, low concentrations and alexithymia. Among these totalthree articles, the mobile phone addiction and its effects have been explained. Just likeMerlo said, Cell phones are a great technology, they are useful in a lot of situationsbut, it is important to make sure you have some cell phone free time in your day (196).

Cell phones bring convenience also some problems about addictions back, peoplenowadays ought to pay attention to the time of usage of cell phones per day in case suffering cell phone addictions. 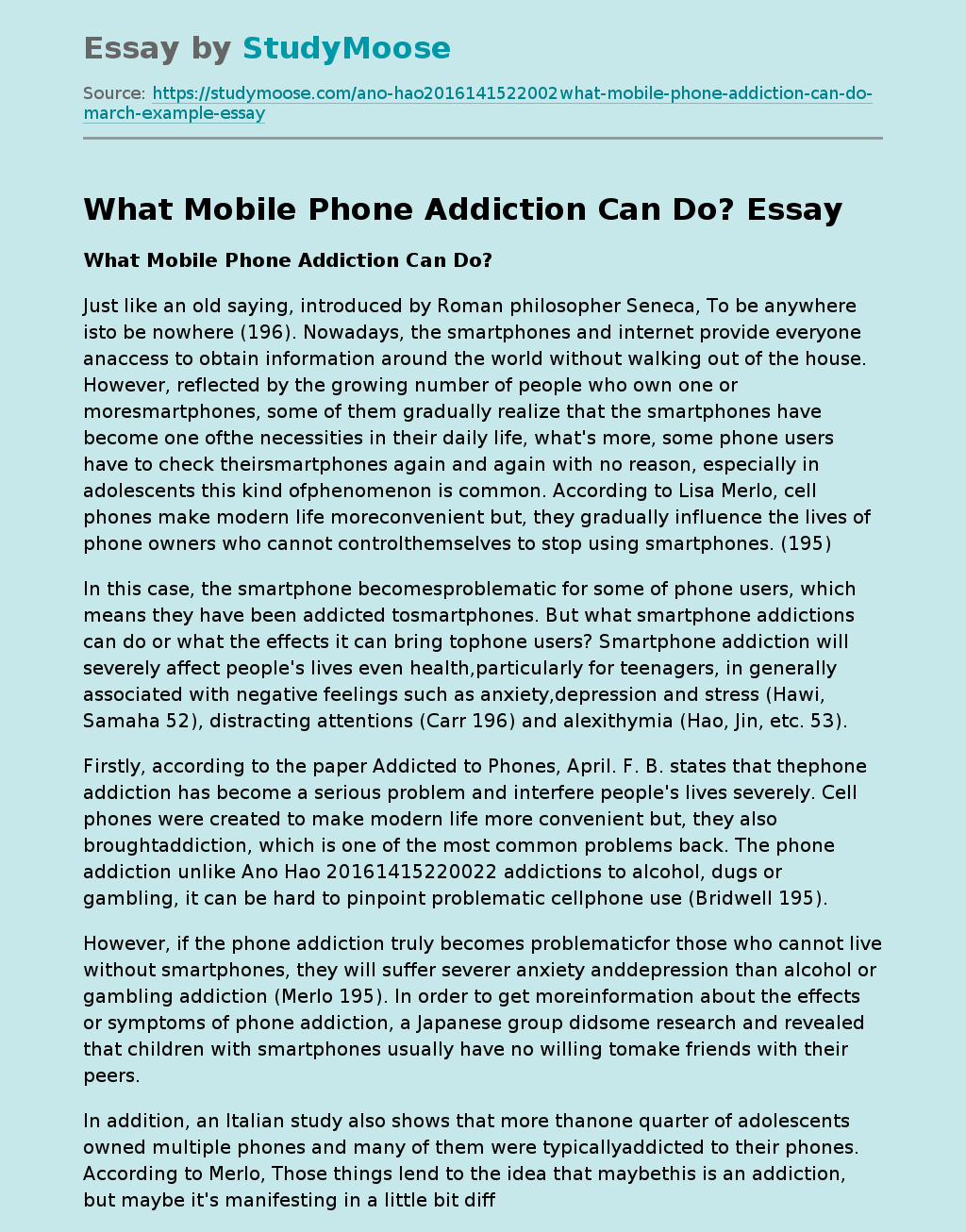