There is a great sense of irony when one comes to the realization that a device originally created to keep people connected has evolved into a device that causes a strong social divergence between one another. The mobile phone, a revolutionary concept of creating the ability to communicate with others casually as well as easily, has not only created a new era of communication, but also a supplementary social standard that has reshaped the process of human interaction between people, or lack there of.

Don't use plagiarized sources. Get your custom essay on
“ Cell Phone and Anti-Social Behavior ”
Get custom paper
NEW! smart matching with writer

This so-called “social barrier” created by the habitual and constant use of cell phones is obvious now, more than ever. As written by Adam Burgess, modern day author of Cellular Phones, Public Fears, and a Culture of Precaution, the use of mobile telephones has completely stripped modern day culture of the interpersonal connection people once shared, when person to person correspondence was the only option available.

Cell phone use has become a second-natured habit to the majority of today’s society.

The preponderance of people would view someone as outlandish if he or she is living in todays world without owning a cell phone. One simple device can and does have a considerable influence on the current American culture, but with that being said, an influence such as this does not simply emerge overnight. The purpose of the mobile phone upon its creation is exactly as it sounds, to create a telephone that accessible at any time and any place. This gives people the capability of having phone conversations despite their location.

Despite the fact that this is a quite obvious concept in today’s society, that wasn’t the case for consumers living about twenty years ago. How can such an incredible influence occur in such a short period of time?

As stated in Kirkley Luttman’s scholarly Health & Science article, the mobile phone was created for the single purpose of sending and receiving telephone calls on-the-go. As time goes on, this simple device becomes one that serves multiple purposes for the consumer. The first advancement in the cell phone was the enabling of text messaging; Instead of conversing via phone call, one can simply type out their desired message and send it instantly via text to their receiver. Now people are capable of having a complete conversation read through a cell phone screen and eliminating almost all intimacy of communication. The next step of evolution is then the creation of social media. Once only intended for computer users by virtue of the world wide web, this was now accessible through a mobile phone. This evolvement also means that cell phones can now access the internet, opening up an entirely new realm of communication from the same device that could once only make a simple phone call.

According to Dr. Emily Murray and her entry in KwikMed: Cell Phones Make Us Socially Oblivious, the additional capabilities with limited time for society to adapt caused a spark of interest as well as excitement in cell phones. With a device that can now send and receive not only phone calls and text messages, but also access the internet, send and receive emails, access websites, and utilize social media, a new culture emerges. All of the new features of a cell phone have one thing in common and that is the fact that they were all created on the premise of making it effortless to communicate with others, whenever and wherever.

Growing up in an age where the use of cell phones is second nature, it is obvious that people truly do communicate with one another on a constant basis. It is of high importance to update ones Facebook status, tweet about the latest trend, post a picture of the weather. It is significant to obtain the most “likes” on a post or picture or the most “retweets” on a thought. It is also crucial to constantly text message a friend, even when the content of the conversation isn’t crucial at all. Such a strong emphasis has been put on communicating with everyone via every single network and outlet available that people have begun to forget what genuine communication actually stands for. This is where the irony comes into play.

Comparable to a domino effect, the use of cell phones within today’s culture has grown into so much more than what is was simply intended for. Much like any innovation, developments are made and in response, adjustments occur. Not only have cell phones created an antisocial stigma within people, but have also caused this behavior to become habitual and “second-natured.” It is obvious that human interaction has drastically changed, even in a mere twenty years. One generation ago, owning any sort of mobile phone was a rare privilege. Even with that advantage, these devices still only served a single purpose, differing greatly from today’s cell phones. Today, a cell phone is not longer viewed as a phone, but a form of assistance in planning events, sending messages and emails, video chatting, entertainment, music, and much more. With a single device in the hands of the majority of today’s society, how can one remain as social as before the creations, development, and spread of this technology?

Going beyond the more obvious arguments that have previously been addressed, cell phone use has opened up the opportunity to act in a disgraceful way without immediate sanction. According to the article, The Relationship between Technology and Cyber Bullying in The Journal of Student Wellbeing, “Due to the advent of modern communication, children are now able to harass their peers with mobile phones…a behavior known as cyber bullying” (Beran, 2007). Without physical confrontation with one another, brutal actions can easily occur, even anonymously at times. If this sort of behavior has become habitual to the current generation, how can a positive outcome be rationally expected? Cell phone use has not only created an antisocial environment within todays society, but also the allowance of insensitive actions without punishment.

It is arguable that person to person, face to face interaction is the most sincere and most intimate form of connection. For the majority of humankind, in-person transmission was one of the few options for humans to communicate. As the way of life has changed, so have the forms of communication, but the new form of disclosure has entirely stripped the affinity of human connection. People are implausibly focused on such an artificial form of interaction. Generations will soon be born into this unnatural habit and it will become the way of life from the beginning unless society understands the importance of intimacy and the cosmetic facade that cell phones have not only created, but promoted. Socialization will forever remain as the message from one person to another, but the channel for them to do so can and will inevitably effect social behavior. The paradox that ties together cell phones and promotion of social behavior will continue to diminish the gregarious importance of physical connection unless society begins to suddenly become alert to the problems cell phones have and will continue to cause. 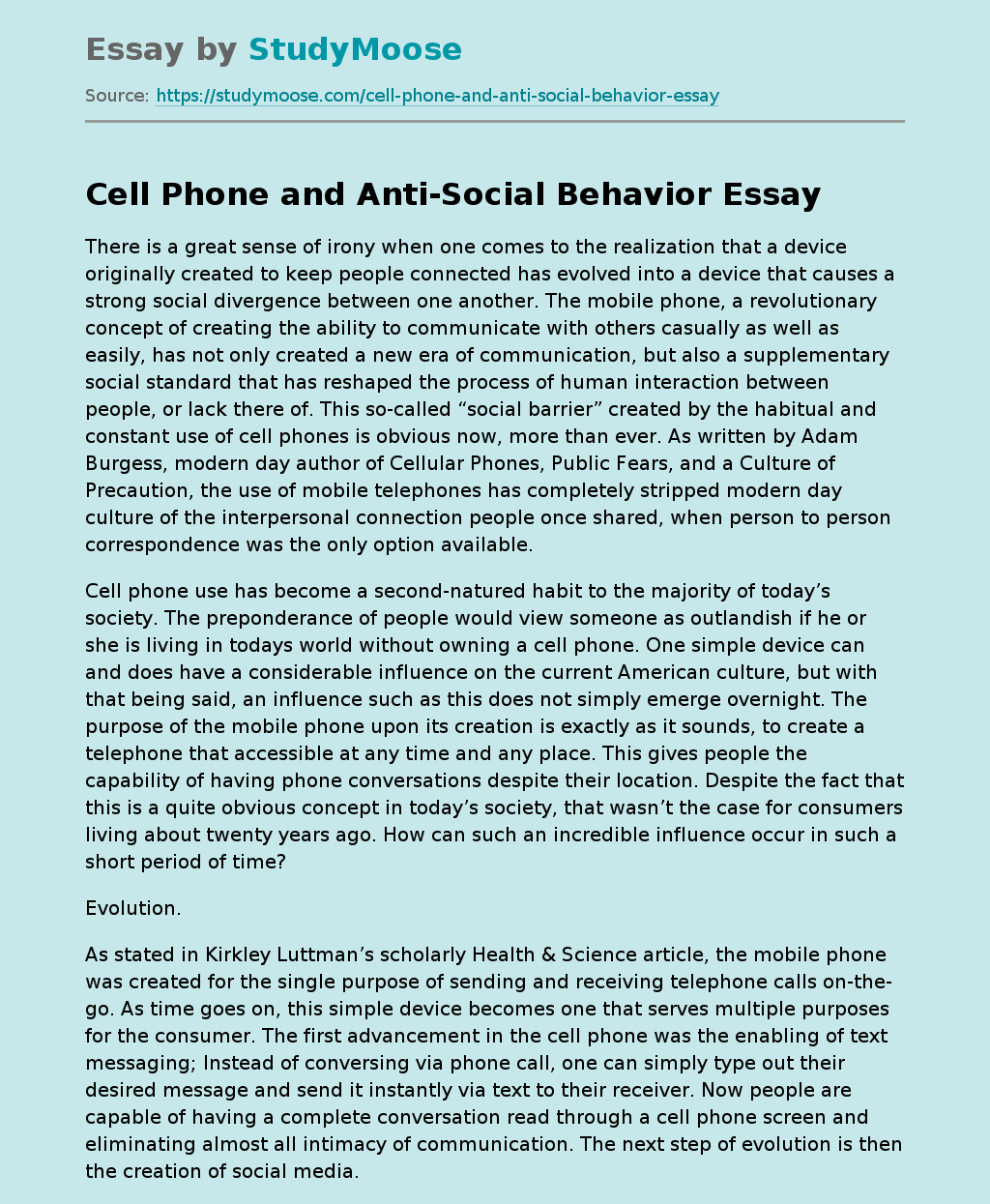