Walking around in school to walking around at the shopping malls with your mobile phone may seem fashionable and trendy, but most people do not know that it might be causing you to get a cancer and brain damage threw the loss of memory. Many mobile phone holders do not realize it and it should be something everyone should be aware of. It may seem pretty unusual how a mobile phone can cause a child or an adult to get cancer, but it is true.

Turn in your highest-quality paper
Get a qualified writer to help you with
“ Cell Phone Effects on the Human Brain ”
Get high-quality paper
NEW! AI matching with writer

New evidence is growing fast about health risks from mobile phones and their electromagnetic radiation.

Recently mobile phones are accused of emitting radiation, which is harmful for health causing cancer, brain tumors, headaches, and also sleeping disorders. These devices can be used to make telephone calls from almost any country in the world to another. Researchers are still being undertaken to come to a definite conclusion if there is any possible impairment by the “cell phone radiation.

” “Research by the Radiation and Nuclear Safety Authority in Finland found that microwaves from cell phone handsets damaged the blood-brain barrier, which prevents materials from the blood entering the brain.

It warned that this might have implications for human health, but it does not insinuate that the biological effect may necessarily pose health risk. It is generally accepted that damage to DNA is necessary for cancer to develop. However, radiofrequency energy, unlike ionizing radiation, does not cause DNA damage in cells, and it has not been found to cause cancer in animals or to enhance the cancer-causing effects of known chemical carcinogens in animals.

The only known biological effect of radiofrequency energy is heating. The ability for microwave ovens to heat food is an example of this effect of radiofrequency energy. Radiofrequency exposure from cell phone use does cause heating; however, it is not sufficient to measurably increase body temperatures. Cell phones use radio frequencies to transmit signals. Radio Frequencies are a form of electrical waves similar to those used in radios, microwaves, radars or satellite stations. They are emitted from a transmitter, and received using an antenna.

This telephony technology is restricted geographically to small zones called “Cells”. Every cell has a base station capable of sending and receiving radio waves. When a call is started a signal leaves the handheld unit headed to the closest base station. This station answers by allocating a specific channel to the unit. There are two types of phones, one has the antenna mounted on the handset and the other has the antenna mounted on a separate transmitter or, if the telephone is installed in a vehicle, mounted on the roof or rear window.

There have been many concerns that radiofrequency energy from cell phones held closely to the head may affect the brain and other tissues, to date there is no evidence from studies of cells, animals, or humans that radiofrequency energy can cause cancer. A recent study showed that when people used a cell phone for 50 minutes, brain tissues on the same side of the head as the phone’s antenna metabolized more glucose than it did tissues on the opposite side of the brain. The researchers noted that the results are preliminary, and possible health outcomes from this increase in glucose metabolism are still unknown.

Today, all the mobile phone manufacturers are now producing mobiles with a limited Specific Absorption Rate, also known as “SAR” which minimizes the impact of radiation. Specific absorption rate is a measure of the rate at which energy is absorbed by the body when exposed to a radio frequency electromagnetic field. It is commonly used to measure power absorbed from mobile phones and during MRI scans. It can also refer to absorption of other forms of energy by tissue, including ultrasound. It is defined as the power absorbed per mass of tissue and has units of watts per kilogram.

Parts of the radio waves emitted by a mobile telephone handset are absorbed by the human head. The radio waves emitted by a GSM handset can have a peak power of 2 watts. SAR is usually averaged either over the whole body, or over a small sample volume which is typically 1 g or 10 g of tissue. The value cited is then the maximum level measured in the body part studied over the stated volume or mass. In theory, children have the potential to be at greater risk than adults for developing brain cancer from cell phones.

Their nervous systems are still developing and therefore more vulnerable to factors that may cause cancer. Their heads are much smaller than adults and therefore have a greater proportional exposure to radiofrequency radiation that is emitted by cell phones. Also children have the potential of accumulating more years of cell phone exposure than adults do. Technology has always made a great impact on our society. Over the last few decades, there have been many inventions that have changed our lifestyles dramatically.

Cellular Telephony has, by all accounts, modified how we interact with others, but with consequences that follow. To this day, there are a growing number of unconfirmed reports of individuals whose health has been affected after frequent use of mobile phones, presumably from radiation effects on brain cells. The full result of long-term use on mobile phones has not yet been able to be tested, simply because they have not been around long enough for the symptoms to make themselves clear. Is putting our health at risk really worth it? 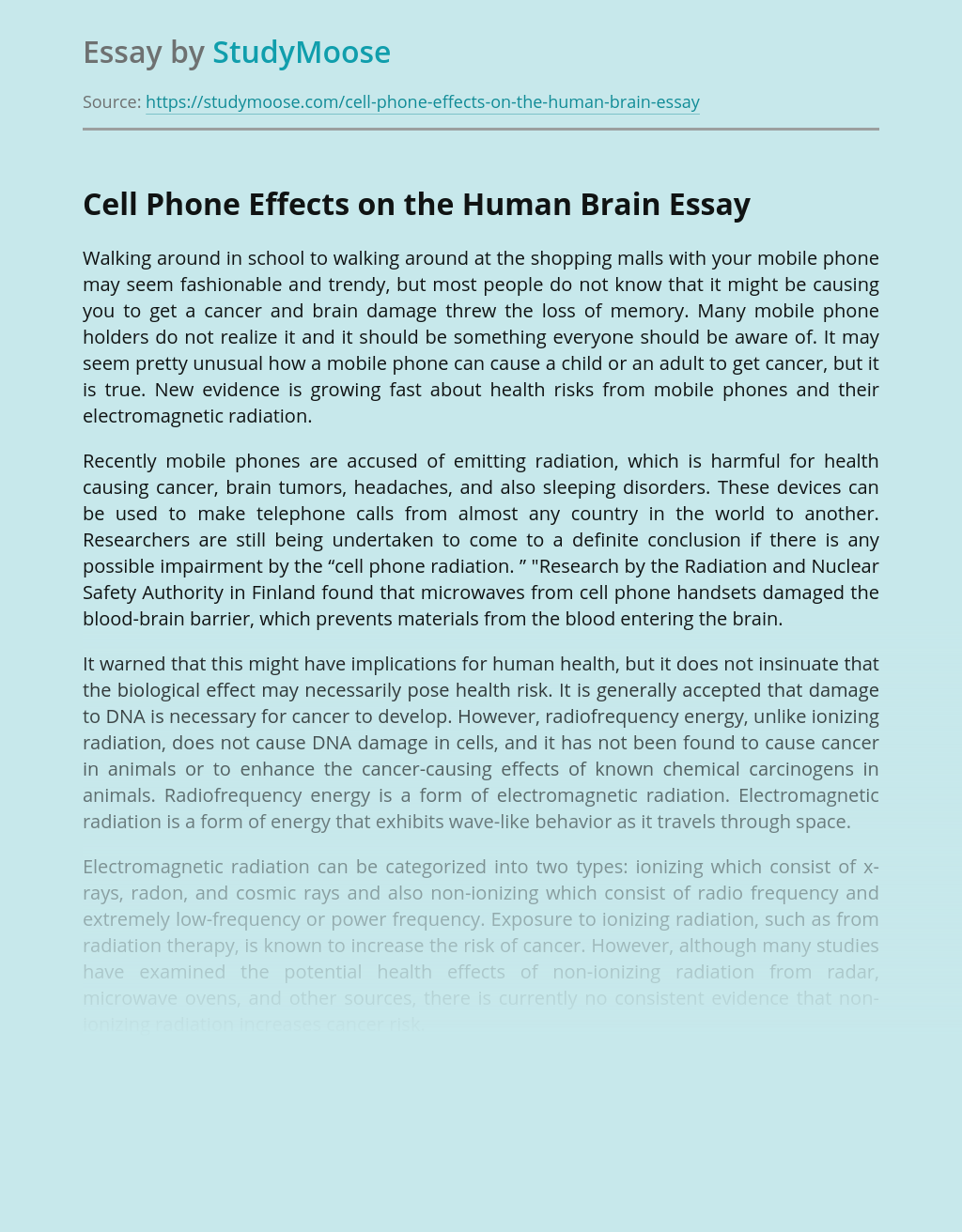 Turn in your highest-quality paper
Get a qualified writer to help you with
“ Cell Phone Effects on the Human Brain ”
Get high-quality paper
Helping students since 2015
Stay Safe, Stay Original