The “folk-urban continuum” model elaborated by Robert Redfield continues to reappear from time to time in various guises. The concept of the continuum has been attacked as being simplistic, and overgeneralized, not least because many geographers have detected village-type communities within large cities.

Don't use plagiarized sources. Get your custom essay on
“ A Maya Village, The Folk-Urban Continuum Lifestyle ”
Get custom paper
NEW! smart matching with writer

Along with this there is collective or community orientation to individualization; and the sacred to the secular.

Folk cultures are borne by small, closely-integrated social units or by aggregates of such units which have already worked out satisfactory mutual adjustments. Redfield characterized the folk societies he had been studying as traditional, spontaneous, and uncritical where men follow similar lifestyles.

These patterns remain clear throughout the generations. In sum, the folk society holds its traditions to heart and doesn’t question their way of life. These lifestyles are practically sacred. In modern civilization, on the other hand, the small social units are being broken down, giving place to masses of individuals who are much more loosely interrelated than the members of the former local groups and classes. In modern civilizations, culture is being reduced. Our own civilization is simply a blend of differences which he must choose.

The concepts of folk religion and folk belief–at least when filtered through Redfield’s categories–are descriptive anthropological categories meant to aid in the attempt to understand the conditions and development of certain kinds of society. In part, Redfield’s concept of folk or peasant culture was
meant to provide an alternative to the division of societies into primitive and modern categories.

The concept relied on a distinction between “an isolated primitive community, which has for context only that community and its local and immediate culture,” and the peasant community and its culture, where “the context is widened to include the elements of the great traditions that are or have been in interaction with what is local and immediate.” Folk beliefs referred to a body of belief and practice forming part of a community’s local knowledge. As a result, they tended to occupy a region close to the cosmology and common sense of the group, rather than the domain occupied by a consciously accepted creed.

Redfield wants to look at cultural change, in the ways that varying degrees of contact with “civilization” differentially affects “folk culture” throughout the Yucatan. The Chan Kom study was the first step in a project funded by the Carnegie Institution to look at the question of culture change. The project was to begin by studying ” a community where folk culture was complete”. This is Chan Kom. Then, for comparison, the study was to go on to look at “communities where that culture is in disorganization or conversion into something else”. Eventually, this project would encompass four towns and would place them in a “folk-urban continuum”. 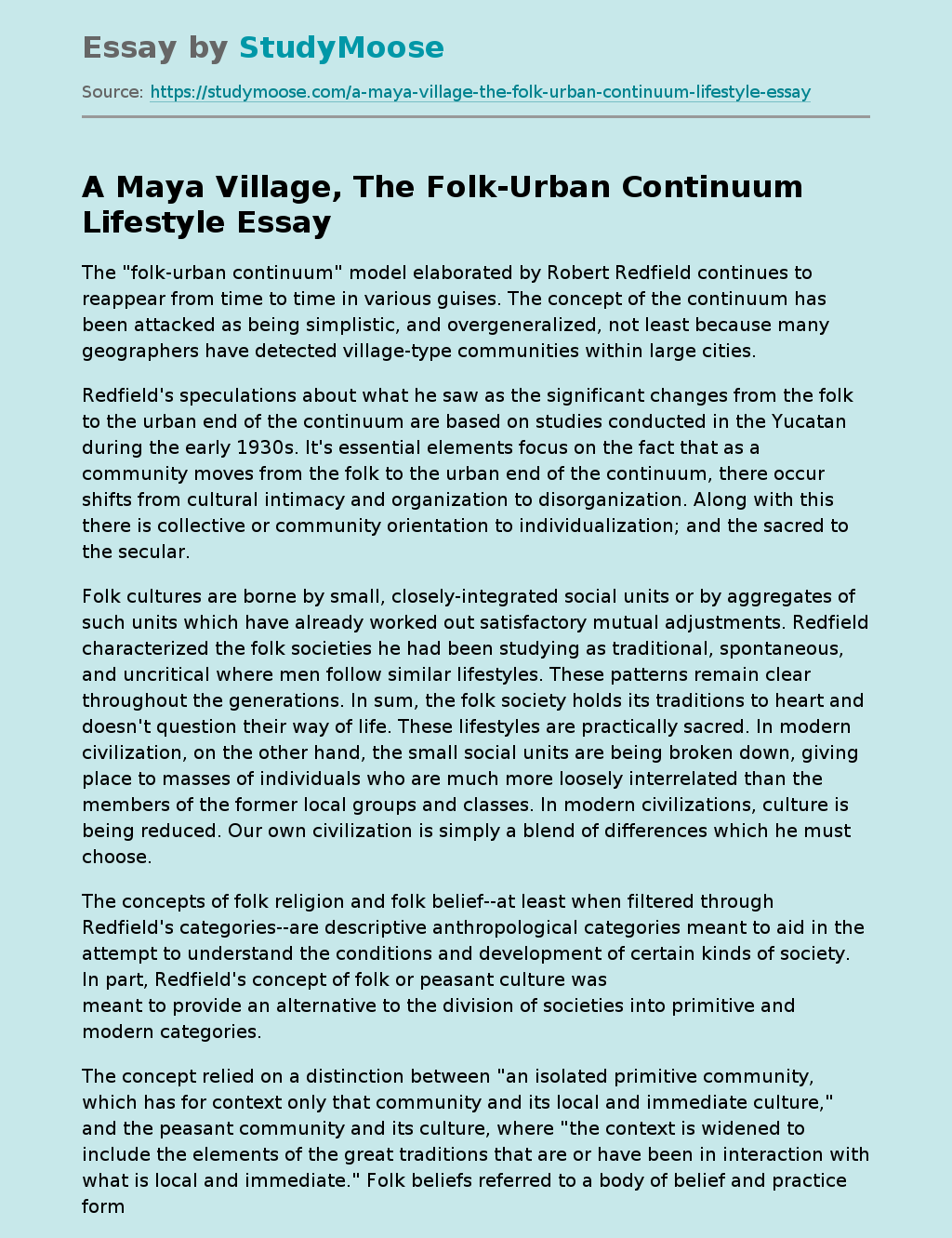