In any developing and developed countries, one of the indicators of development is the infrastructure and the growth of cities. Urban culture is the cultural behavior that is associated with the urbanites. Cities all over the world, from the time immemorial have behaviors and cultural elements that separate them from otherwise specific comparable rural areas. In the developed countries, the word urban is solemnly used as a euphemism to describe dot com culture or subsets of racial culture, and this forms a defined groups as a type of urban tribe.

Don't use plagiarized sources. Get your custom essay on
“ Cities and Urban Life ”
Get custom paper
NEW! smart matching with writer

Therefore, names for cultural artifacts like urban loud music could be seen as a new term for certain class music. It can also refer to the greater availability of cultural resources such as art, theatre, events, etc as compared to suburban or rural areas.

In summary, the author ventures on the advantages and disadvantages of urban life as compared to rural life. Here, there arises a query as to why the rich or the affluent prefer living in major cities.

Proficient in: Rural And Urban Life

Moreover, the poor are associated with the rural life. Some of the advantages of urban life include availability of basic human needs in varieties.

There is cheap and ready means of transport in urban areas as opposed to rural areas. Availabilities of reputable health facilities. In rural areas, one has to travel miles away to access health facilities, market, higher institution of learning etc. Contrary to that, some of the weaknesses associated with urban life include congestion due to over population, concurrent crime activities, pollution to water, air and environment at large, due to wreck less dumping of refuses, polythene bags and tins.

Slums are another menace associated with urban life. In every large city, there must be a slum nearby.

In Our Modern Urban Lifestyle

Following the development of technology, the quality of life becomes better off. It is attractive enough to live in cities, because people can enjoy a lot of convenient facilities. However, some people believe that many people do not know their neighbours and the sense of community has been lost with the increasing number of people in cities. In this essay the effect of the modern urban lifestyle in cities will be discussed. Nowadays, many people tend to live in cities for different reasons. They move into cities mainly for work. Because they leave early in the morning and come back home late in the evening. They do not want to waste their time on a train or bus. If they live in cities, they do not need to wake up early to take a train or bus.

Furthermore, living in cities means that they can easily find places or facilities to fill their every need in the urban life, which is valued in the individual lifestyle rather than the sense of community. On the other hand, many people seem to be more isolated than ever before. Because of focusing on the individual lifestyle in modern time, it is hard to have an opportunity to make a deep relationship with people living around. People do not usually know what happens to their neighbours. Humans are social creatures that cannot be independent of others. As a result, even if there are a lot of convenient places in cities, they cannot fulfil satisfaction of people. Most people in cities fall into the sense of isolation. They need to realise the negative effect of their lifestyle and make effort to join in communities in their lives, so that they can live in a simpler way of life.

From other disciplines perspective, the author introduces a disciplinary analyses and contested accounts of tourism and urban culture from geographical, historical, sociological, anthropological and economical point of view. Finally, there are some developments in subject field analyses from urban and planning studies, Cultural and leisure studies, Gender and queer studies. 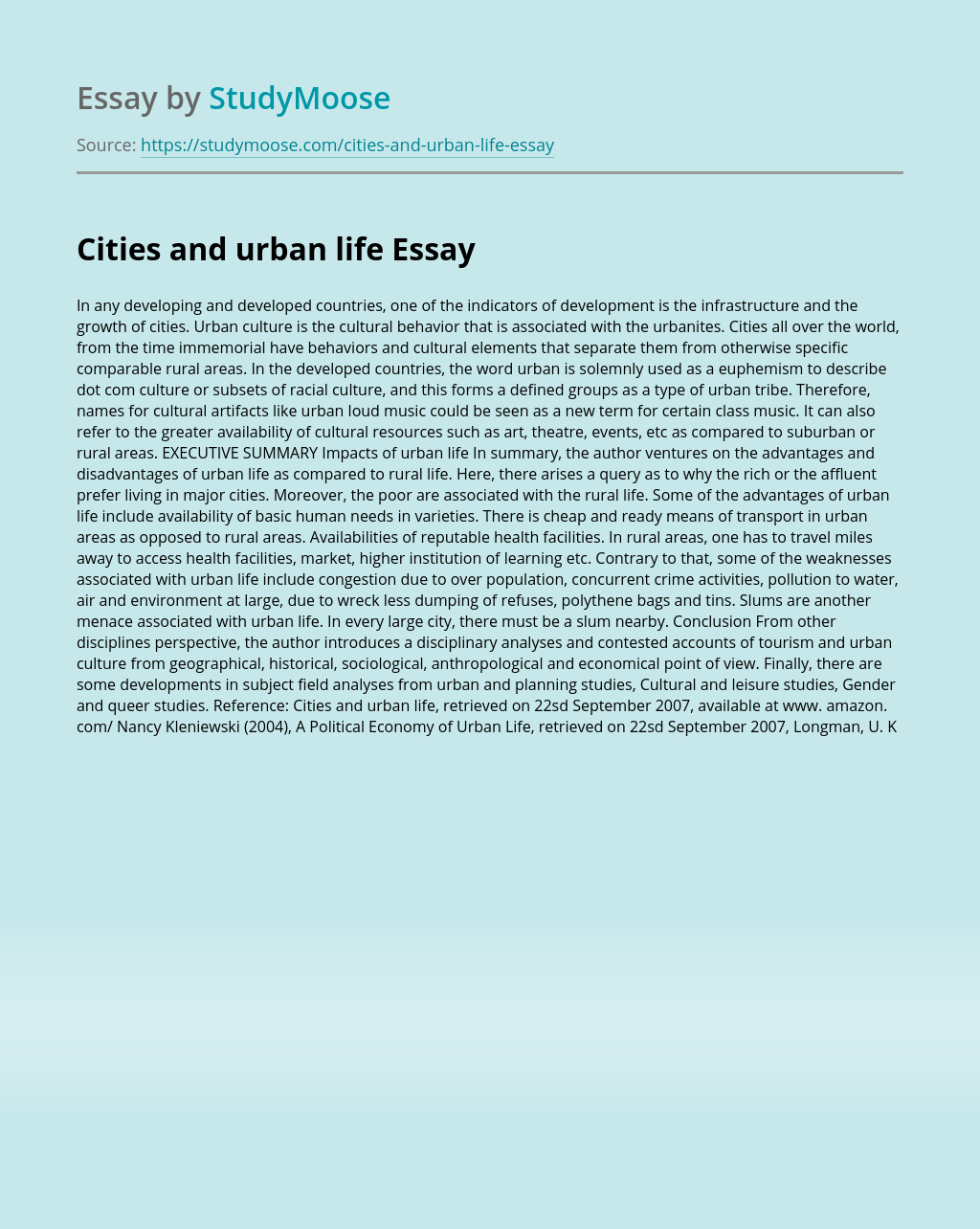