Living in a large city or small town

Certain advantages of living in a large city City life and rural life are absolutely the different sides of the coin, so choosing whether to live in a big city or a small town requires serious consideration. Each city has its unique aspects and qualities that distinguish itself from others. Each person has his or her own opinion about where to live based on his or her life style. However, according to me, living in a large city has certain advantages over living in a small town: convenient public transportation, greater entertainment facility and higher employment.

Don't use plagiarized sources.
Get Your Custom Essay on Living in a large city or small town Just from $13,9/Page

To begin with, a metropolitan city has its obvious advantage when it comes to the public transportation. It is wildly known that a big city has extremely convenient transportation which can be best illustrated by the example of New York, where the subway runs twenty-four hours for seven days a week and there are tremendous cabs and buses everywhere. Not to mention that the transport system is always fast, safe, clean and affordable.

For the poor, who can only rely on the public transportation, such a convenient and efficient system makes it much easier for them to seek work opportunities far from their living houses and also gives them greater access to education, healthcare and recreation. In addition to public transportation, what makes people pour into big city is its wonderful entertainment facility. Many small towns often offer less social amenities than expected due to its demographic and geographic factors. Whereas, countless facilities of entertainment and cultural activities such as cinemas, theatres, concerts, museums can be found in a large city like Shanghai with the least effort and time. Such facilities not only offer people a place where they can be relaxed after a week’s hard work, but also can nurture the soul and cultivate the mind to some extent, which is particularly beneficial to children who are willing to visit some historical museums during their spare time.

Finally, higher employment is another reason why people prefer urban areas. On the one hand, there are a lot of headquarters for large companies in major cities as well as large factories, so the average employed person is a step higher on the ladder than they will be in smaller cities. And it is likely that people will find something that specifically matches their skills. For instance, a friend of mine who majors in software engineering can easily find a related job in big cities while he may find the different line of work if he is in rural areas. On the other hand, statistics show that people in large cities are more likely to have a Bachelor’s degree or better, which contributes to the high employment and better payment. Taken all of the above reasons into consideration, small towns cannot be compared with big cities in public transportation, entertainment facilities and job opportunities. Although, small towns are more tranquil and peaceful, if a person pursues a fast-pace and colorful life, major cities are his or her best choice.

Living in a large city or small town. (2016, Mar 17). Retrieved from https://studymoose.com/living-in-a-large-city-or-small-town-essay 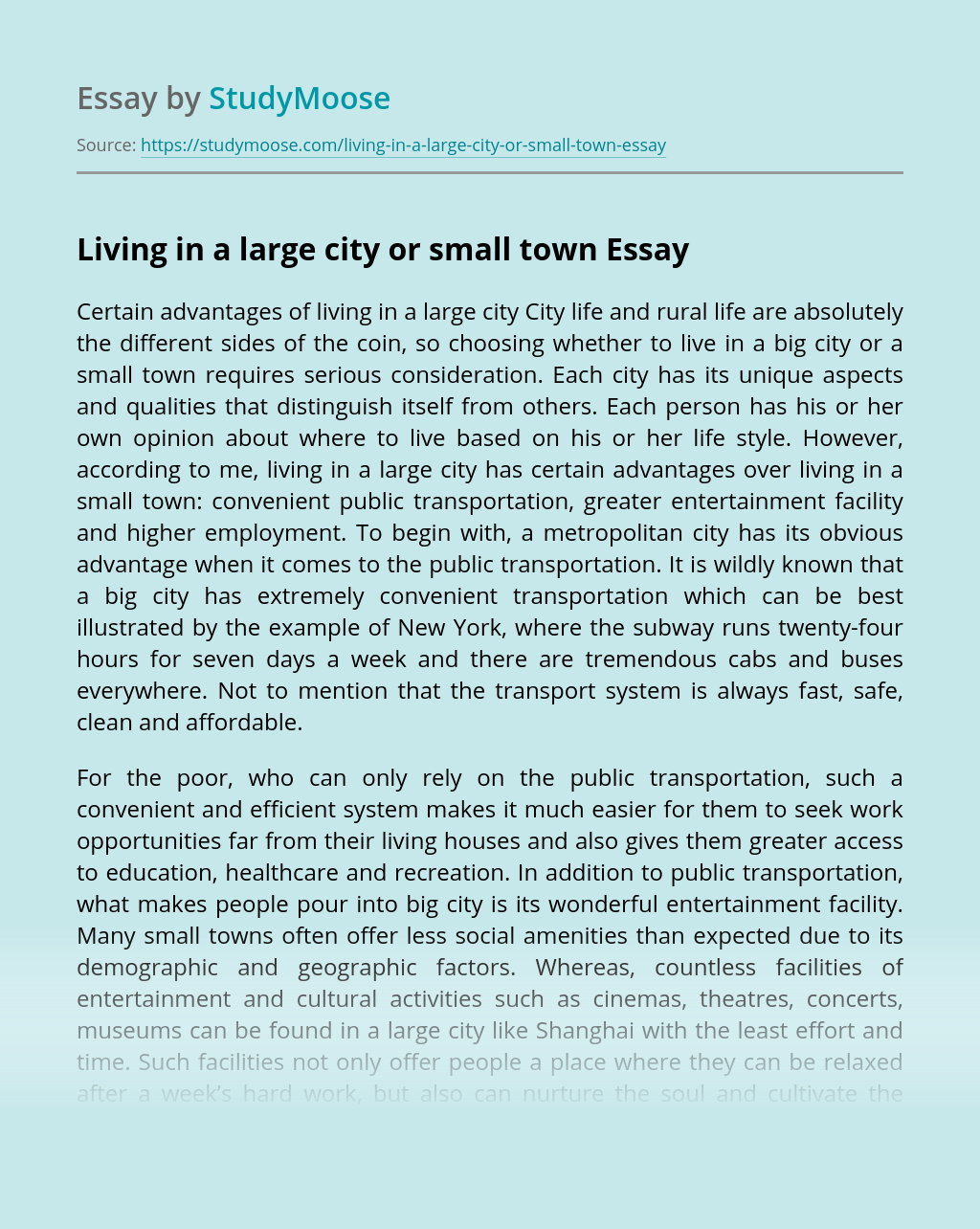 According to the Center for Disease Control, motor vehicle crashes are the leading cause of death among people ages 5-34 in the United States.1 In fact, between 2000 and 2005, 42,000 people died on our country’s roads and highways.2 Additionally, the lifetime costs of crash-related deaths and injuries among drivers and passengers were $70 billion...

The Effects of Living a Sedentary Lifestyle

Culotti’s Pizza operates strictly on a carryout basis. Customers pick up their orders at a counter where a clerk exchanges the pizza for cash. While at the counter, the customers can see other employees making the pizzas and the large ovens in which the pizzas are baked. Instructions: Identify the six principles of internal control...

Nature is such a beautiful place

Life is getting hard and expensive as the years are passing by. The prices on food, and other utility prices are going up. People have school, work and a family to look out for and do not have the time to enjoy the simple things in life that earth has to offer which is nature....

At the start of “Looking for Alibrandi”, by Melina Marchetta we are introduced to a seventeen year old girl by the name of Josephine “Josie” Alibrandi, who is in her last year of high school. By the end of the book it is made obvious that Josephine has gone through many dramatic and important changes,...