A future war has destroyed human peace. A group of children was flying across the sea when a plane crashed and trapped on a desert island. At first, the children worked together to cope with the difficulties that followed. But because of the fear of “beasts”, the children gradually split into two groups, one representing reason and civilization and the other representing wildness and primitiveness. Finally, the contradiction between the two groups broke out.

Ralph is the protagonist of this novel.

Don't use plagiarized sources. Get your custom essay on
“ A future war has destroyed human peace ”
Get custom paper
NEW! smart matching with writer

He has blond hair, and handsome look. Meanwhile, he is very tall and with a righteous personality. Ralph regards conch as a symbol of democracy and order, so that the people who own conch on the island can have a voice, instead of speaking freely, and uses Piggy’s glasses to refract the light to raise the flame, trying to save the boys on the island with distress signals. From the above point of view, Ralph is a good leader, and his motivation is vary clearly: save everybody leave the island.

But actually, Ralph is not exactly a good leader. At the ending of the novel, his is afraid, because sometimes he doesn’t care about the fire, and he involuntarily participated in the persecution of Simon. In other words, Sometimes he is selfish, he thinks that he is the leader, then he has the right to make rules and does not listen the others suggests.

In this encounter, as a leader, Ralph played a role only at the beginning, building small houses, setting up toilets, and the democratic system in which people with conches could speak.

However, after that Ralph is become indifferent. Ralph was not a cruel person at first, but as for the reason that the cruelty of Jack and others, Ralph gradually moved towards cruelty. Simon died, Piggy died, Ralph did nothing to prevent the tragedy. Even if it happened again, Ralph couldn’t. Not because of his lack of ability, but because of his indecisive character. Ralph has no way to make a decision in the face of Jack’s black power, because Ralph always believes that everyone should have a good and equal discussion, but never willing to use mandatory means to stop his opponent Jack. Therefore, indecisiveness in solving problems makes it danger for himself and those who trust him. Furthermore, Jack thinks that hunting can eat meat, and when all people can only eat vegetarian, eating meat represents a privilege. This privilege became a force at this particular time, but Ralph could not show his power at all. The hope of being saved that he pursued became more and dimmer as time went on. By contrast, the temptation to eat meat and live a well-off life is greater for other children. So Ralph will become a nominal leader. In the face of the reality of hunger, Ralph can just only submit to Jack’s decision, because Jack led a group of people to hunt wild boar, in order to let people have food. Ralph even involuntarily participated in the killing of Simon in this process, which shows the darkness of human nature and Ralph’s evolution. Thus, people will follow the essential things. When Ralph decline of prestige, Ralph becomes particularly weak. Ralph followed Jack subconsciously during the hunt, which is why he involuntarily took part in the slaughter of Simon. So Ralph’s character and Jack’s influence led Ralph to fail to take action to prevent death. 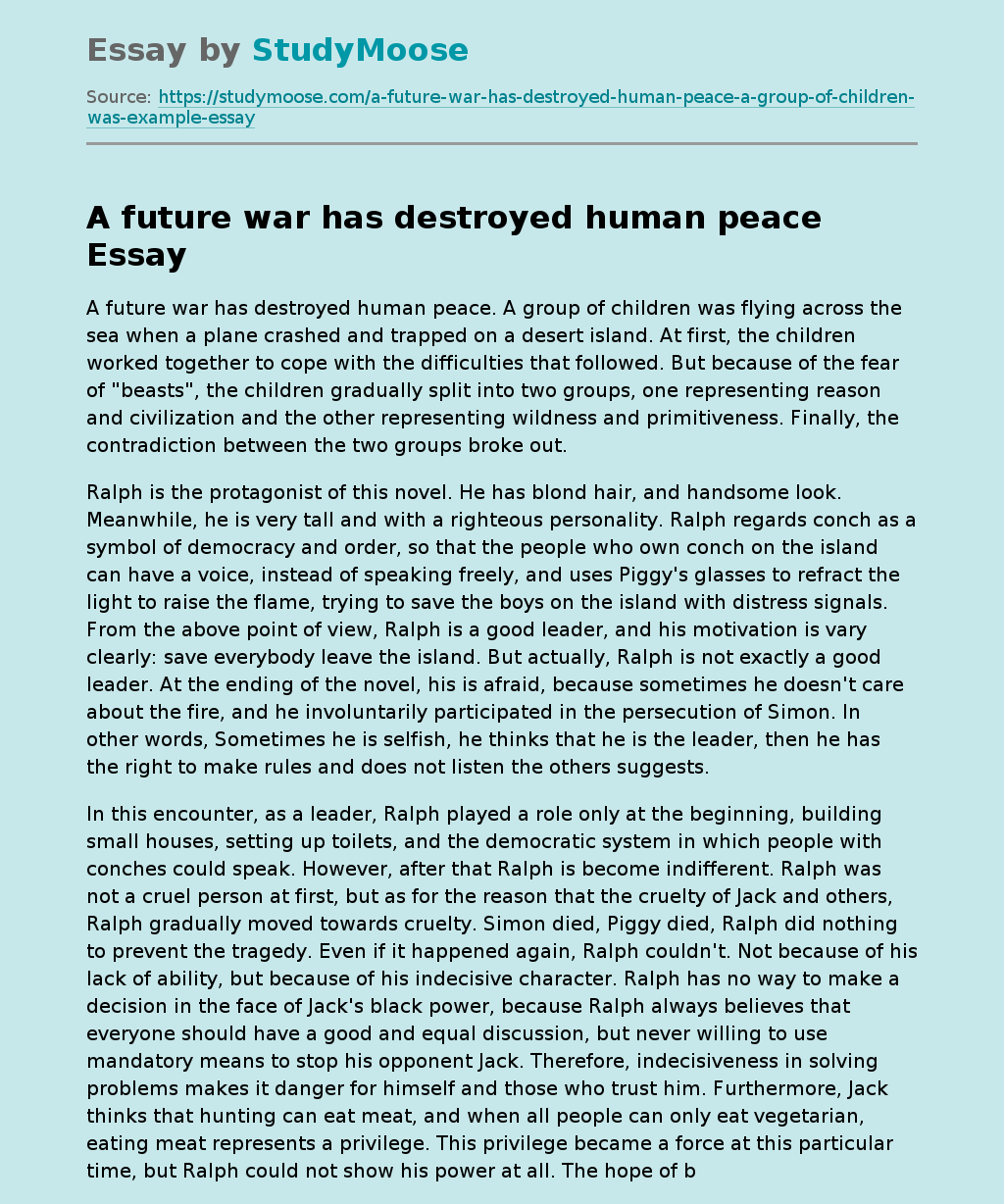