“A Peace to end All Peace”: The Treaty of Versailles

Recently, historian David Fromkin wrote a book about the Treaty of Versailles, arguing that it was ‘A Peace to end All Peace,’ hence its title. This is so all the Treaty really offered was only an amicable, short-term, settlement between the warring powers that placed Germany in a disadvantageous position. Eventually, this resulted to a sentiment of retribution among the Germans, which backed the rise of Hitler and the start of another World War. How was the Treaty of Versailles flawed? Below are several aspects for discussion.

Don't use plagiarized sources. Get your custom essay on
“ “A Peace to end All Peace”: The Treaty of Versailles ”
Get custom paper
NEW! smart matching with writer

First are the military aspects of the treaty. “Germany’s army was reduced to 100,000 men; the army was not allowed tanks. She was not allowed an air force. She was allowed only 6 capital naval ships” (Trueman, n.d.). However, this happened “only in paper” a Germany “side-stepped” the rule and signed her soldiers only for a short contract of service (ibid.). Once the contract is done, she put the soldiers in reserve, successfully carrying out the term of having no more than 100,000 soldiers at any one time, while still having a substantial amount of reserve troops that helped Hitler rise later (ibid.

). Also, although Germany was not allowed an air force, she trained potential pilots, as well as submariners, abroad (ibid.). This did not break the treaty as there were no provisions regarding it in the first place.

Second are the financial and territorial aspects of the treaty. Germany was demanded to cede all of its colonies, to pay financial penalties linked to war destruction, and to not unite with Austria all at the same time (Trueman, n.

d.). The Treaty also “provided for the delivery of capital goods and raw materials to the Allies” (Sage, 2006). To the Germans, these terms offered them severe economic restrictions with possibly no chance of rehabilitation. Nonetheless, “Germany was still the strongest power in Europe economically, so that the unwise thing about Versailles was that it annoyed the Germans yet did not render them too weak to retaliate” (Lowe, 1982).

Third and most importantly are the political aspects of the treaty. Germany was not even included, much more consulted, in its drafting. She was left all alone, with even the membership to the League of Nations banned against her. Most importantly, she was even made to admit “full responsibility for starting the war” – a term explicitly written in Clause 231 of the treaty, the War Guilt Clause (Trueman, n.d.). With her admitting full responsibility, she had to pay for reparations, which are well beyond her ability to pay. The Allies literally pushed Germany to the ground when they made her sign a blank cheque for the reparations, “which the Allies would cash when it suited them” (ibid.).

Again and again, Germany’s opinion was never asked nor even heard of while the treaty was drafted until it was carried out. The most the Allies did was to convince her that she will be consulted after the Armistice in November 1918 (ibid.). The Germans did not like the treaty forced on them. But as the war had rendered them incapable of starting another war, they had no choice but to sign it, lest they be invaded by the Allies. At the end, Germany was the victim. The supposed victims, i.e. the Allies, emerged as victors as the terms of the Treaty worked greatly to their advantage, leaving Germany bruised and battered more than ever.

However, some scholars would argue that the treaty was not that bad after all. For instance, Jaron Sandy (1999) believed that it was the “best compromise possible,” though it “was certainly not the best one could hope for.” He agrees that it was “comprehensively harsh” on Germany, but it did not fail as a solution for peace, because there was a “period of relative stability” in Europe from 1924 to 1931. But considering the discussions above, the Treaty of Versailles was proven to be a “Peace to end all Peace.” Some scholars would even say it “was no peace treaty” at all, but just “an indictment of Germany” (Sage, 2006). All it left was “a mood of anger throughout Germany as it was felt that as a nation Germany had been unfairly treated”(Trueman, n.d.).

Sandy, J. (1999). Personal Conclusions about the Treaty of Versailles and Its Effects (excerpt). Retrieved July 14, 2008 from http://www.johndclare.net/peace_treaties1_Answer.htm

“A Peace to end All Peace”: The Treaty of Versailles. (2017, Mar 03). Retrieved from https://studymoose.com/a-peace-to-end-all-peace-the-treaty-of-versailles-essay 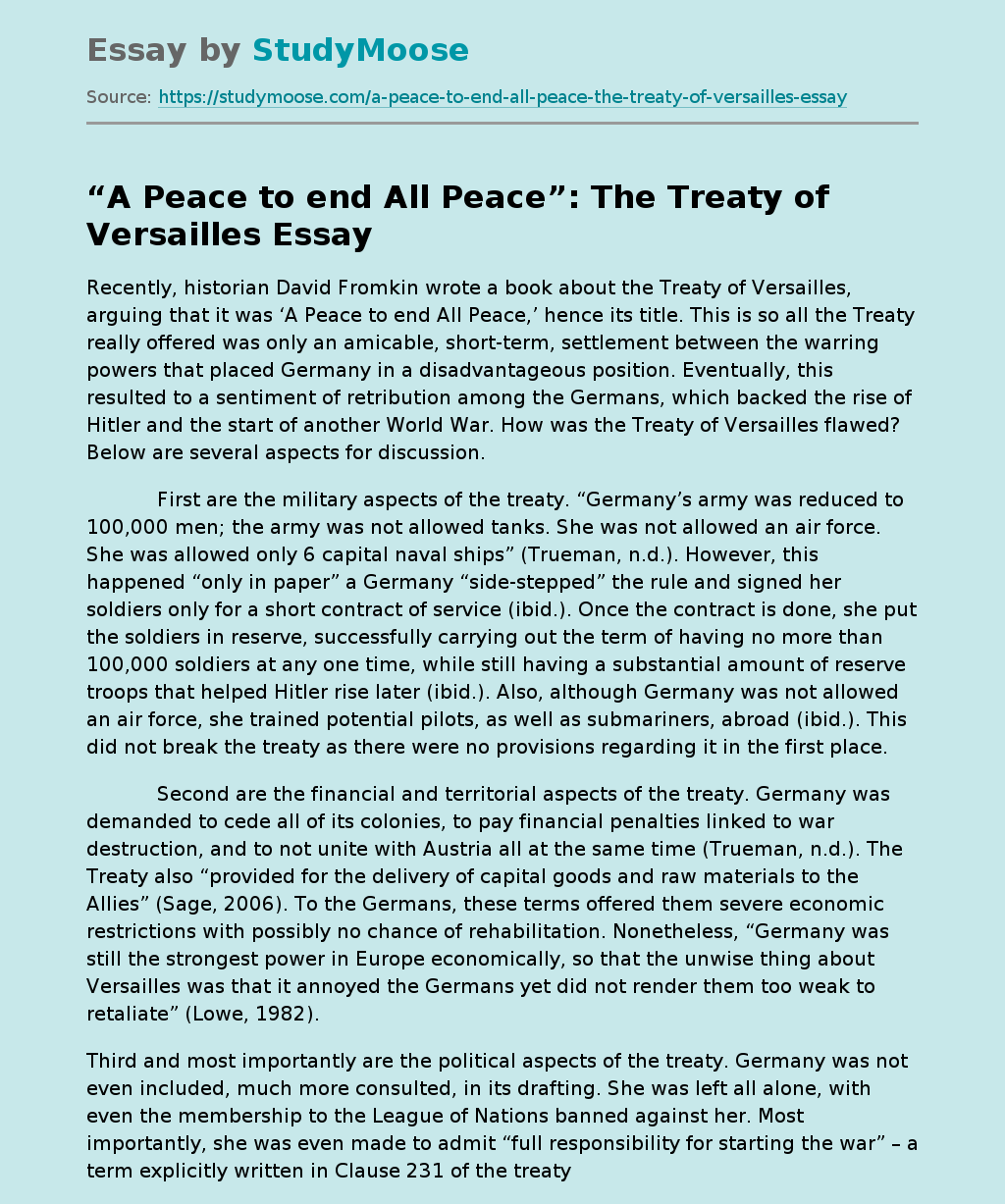