How far was this the aim of the Treaty of Versailles and did it succeed in fulfilling Geddes hopes?

The negotiations that became known as the Treaty of Versailles became highly contentious, especially whilst negotiating German frontiers and boundaries. The French demanded that Germany’s western frontier be fixed on the river Rhine. The area to the left would go to France or would be an independent state. Lloyd George and Wilson (UK and US representatives) both opposed this proposal. A compromise was made but it was far from squeezing the German lemon till the pips squeaked. It was agreed that there would be an allied occupation of the Rhineland for 15 years.

Don't use plagiarized sources. Get your custom essay on
“ How far was this the aim of the Treaty of Versailles and did it succeed in fulfilling Geddes hopes? ”
Get custom paper
NEW! smart matching with writer

An Anglo- American treaty guaranteed France against a German attack. The Rhineland itself would be divided into three zones each would be evacuated after 5 years, following this would be a demilitarization of the area in which German troops would be barred but would be run by German administration. This compromise was hardly against Germany; in fact it is quite nice to the Germans. There is disagreement between the big 3 (France feel aggrieved) and they are offering to preserve a peace of land until Germany is economically stable enough to have back!!!

The Eastern borders were even more contentious.

Wilson’s 14 points had promised to create an independent Poland with good access to sea. There was however no clear cut divisions between areas of Polish population and areas of German. Clemenceau wanted a strong Poland and supported even their most extreme demands. The loss of land to Poland left millions of Germans outraged, in particular the loss of the Polish Corridor which separated East Prussia from the rest of Germany.

Once again this territorial dispute left the big 3 arguing and the German people embittered.

France feel threatened due to new Anglo- American agreement and the fact that the French support any EXTREME political group whilst trying to create peace suggests they were involved for all the wrong reasons. Germany were also forbidden to unite with Austria and lost all her colonies. This is punishment to the maximum against Germany, which leads to resentment. But this decision may have been objected to by the colonies which is unfair, it also causes the build up of more empires and despite gains made by countries such as Italy and France they still feel aggrieved as they expected and were promised more!

The order of German disarmament was a less complicated affair in which most decisions were agreed on by the big three. Germany was to have no tanks or aeroplanes and its army was limited to 100,000 men. It was to have no large battleships and no submarines. This left the German nation humiliated and extremely vulnerable. It was not enough military might to protect itself in the short term however it was enough to give them hope of re establishment and the determination of a second attempt.

I believe that total annihilation would have been more appropriate as we now know they were still able to initiate a 2nd World War. By far the sorest area was that of War Guilt and Reparations. By article 231 Germany had to accept full responsibility for causing this war. This war guilt clause was hated by the German people but provided a moral base for the allied demands for Germany to pay reparations. The main difficulty was deciding how much Germany should pay, how much they could pay and how to divide it between the allies. Wilson wanted a reparations settlement based on Germany’s ability to pay.

However the French and British publics wanted to extract huge payments which would help allied countries to meet the costs of the war and also weaken German economy for years to come. “To squeeze the German lemon till the pips squeaked”. Lloyd George was pulled several ways. He was convinced that Britain would get their fair share, insisting, successfully, that damage should include merchant shipping loses and the costs of pensions to those disabled, widowed or orphaned by the war. But like Wilson he thought that Germany should pay only what it could reasonably afford.

He didn’t want to totally abolish any prospects of further exports to Germany which had previously been a good market for British goods. His personal feelings aside Lloyd George could no longer afford to ignore the prevailing mood of the people in the UK especially after promising to screw Germany “to the uttermost farthing”. Eventually a reparations committee was set up to decide on a final figure. In 1921 it was recommended that Germany pay i??6. 6 million. In the end of this hurried process the Germans had no other option but to accept the treaty or face the threat of invasion.

The Big 3 were once again divided and there was an increase in bolshevism due to the weakness of the government. This is however the point at which the pips begin to squeak and is exactly the type of punishment Geddes was describing. The League of Nations was written into the Treaty of Versailles, the assembling of it typifies the treaty of Versailles. It was badly planned and rushed, and as it was published no one had actually read all 440 clauses! This project was Wilson’s obsession and despite Clemenceau’s and George’s objections they were forced to support the concept in return for the priceless friendship of America!

All nations agreed that Germany would not be allowed to enter until she had proven her willingness to carry out the peace terms. It was under the League of Nations those clauses such as reparations, war guilt, and territorial were established. What none of the big three realised was that this league was to lack America, the American senate refused to ratify the Treaty of Versailles and therefore USA didn’t become a member! The result according to Medlicott was that “Britain and France were left as the embarrassed nursemaids of a rather endearing spastic infant, the product of some injudicious international love making! ”

Overall Britain seemed to have gained from what it wanted from the peace settlement. German Naval power had been destroyed and Germany had agreed to pay reparations. The overriding British view was that the treaty was firm but fair. Germans of all political persuasions claimed that the treaty was punitive and lost from the original agreement based on Wilson’s 14 points. Opinion in Britain after 1919 also reached the conclusion that Germany had been treated unfairly. France however found the treaty far too soft. After a costly war, for which it was to blame, Germany had only lost 13% of its pre war territory and 10% of its population.

Surrounded by small unstable states on its southern and eastern boundaries Germany remained potentially the strongest state in Europe. Clemenceau believed he only signed the treaty because Britain and the US had offered France a defensive alliance. Most Frenchmen in consequence felt betrayed. I believe that the treaty of Versailles was, at times, in particular the reparations, harsh to the maximum and the pips did squeak however in many other areas such as military and territorially the treaty was not harsh enough and its aims certainly were not simply to create peace.

I believe the US saw mass economical gains and both Britain and France (and Italy to an extent) saw the prospect of new colonies to add to their illustrious egos. It can be foreseen that the failure to solve the German problem in 1919 laid the foundations of the 2nd World War and therefore Geddes hopes had not been fulfilled. A good summary echoed by contemporary historians is this… “The treaty was the worst of all worlds too severe to be acceptable to most Germans and too lenient too constrain Germany. “

How far was this the aim of the Treaty of Versailles and did it succeed in fulfilling Geddes hopes?. (2020, Jun 02). Retrieved from https://studymoose.com/far-aim-treaty-versailles-succeed-fulfilling-geddes-hopes-new-essay 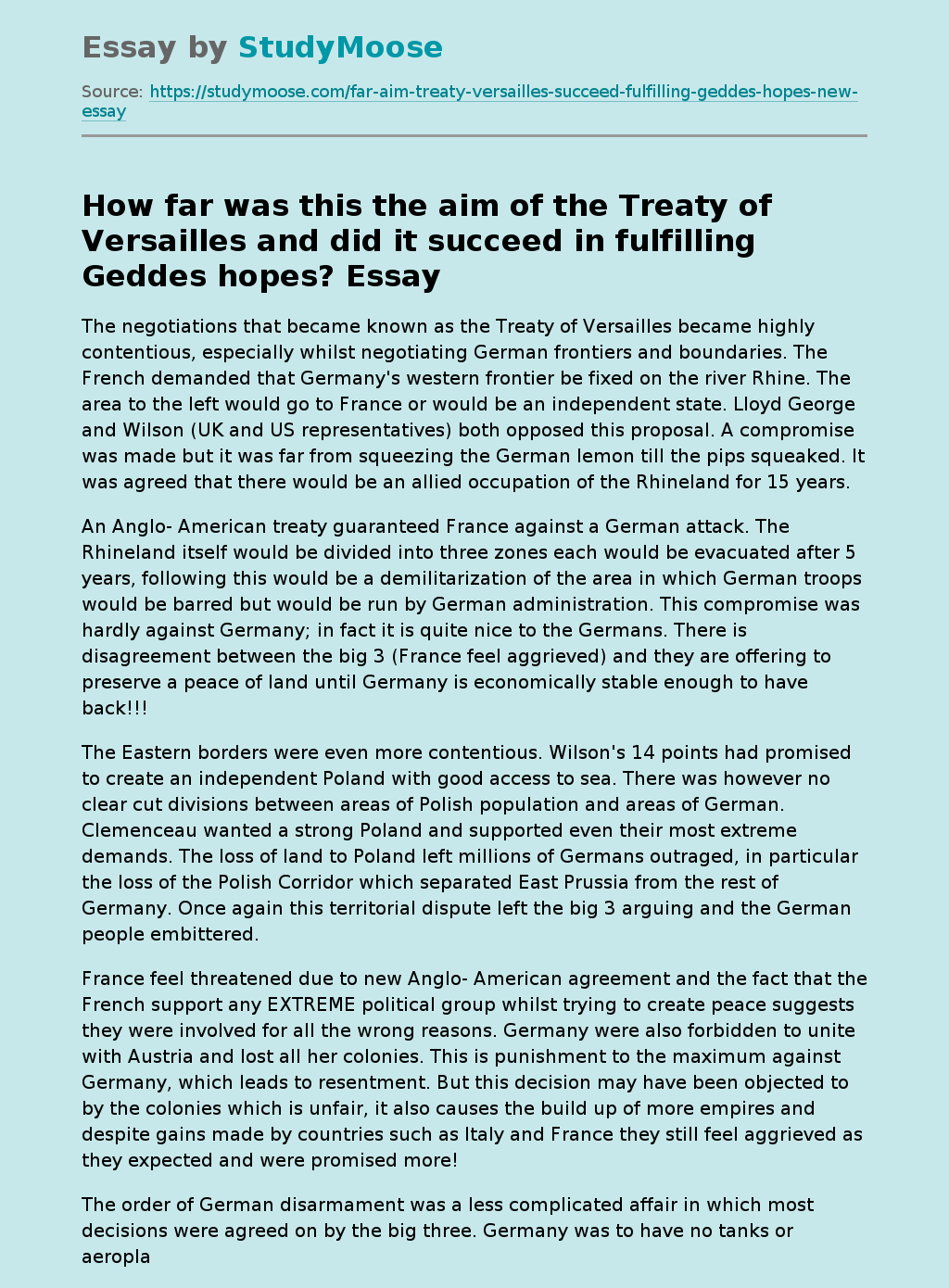