What are the changing attitude of Australians towards war and peace?

With the outbreak of the First World War when Britain declared war on Germany; Australia immediately supported ‘the mother country’ and so did all the other countries in the British Empire.

Don't use plagiarized sources. Get your custom essay on
“ What are the changing attitude of Australians towards war and peace? ”
Get custom paper
NEW! smart matching with writer

Australia entered the war with great enthusiasm most of this enthusiasm was mistaken for naivety and ignorance.

“Turn your eyes to the European situation, and give the kindest feeling towards the mother country at this time… But should the worst happen after everything has been done that honor will permit, Australians will stand beside out own to help and defend her to our last man and our last shilling.

(Source 1) This supports the idea of a deep affection and loyalty towards Great Britain and how our men found it as their duty to support Britain in the war. Getting young men to enlist was an easy task as it was meet with enthusiasm and great eagerness by many. It was seen as an exciting new adventure, many had strong patriotic views and feelings about the war they were about to enter and it was seen as an act of heroism and their duty.

Peer pressure also played an major part if your mate signed up so did you, romance was also another key factor of men enlisting, women found men in uniform attractive and it was seen as an act of cowardice and if you did not enlist women highly disapproved. It became a tradition for many to give men in civilian dress a white feather that symbolised their cowardice. ( Source 2 ) is an enlistment poster which plays on a males pride and emotions by saying are you going to be coward or step up and fight for your country shows the nations view towards those who did not fight.

It was to promote enlistment by acting as an emotional trigger. But by1916 Australians had become well aware of the cruel reality of war and the enlistments began to stagger. This brought about the debate of conscription, which had a significant effect on societies attitudes. It split the nation and the Labor party. 32,000 men were needed to reinforce Australian troops and Australia’s Prime Minister Morris Hughes believed that the only way to get these numbers was by introducing conscription. His own Labor Party opposed against it so Hughes knew he could not go through parliament and had introduce it as a referendum.

In 1916 the results of the first referendum were 51% opposed to 49% approving, this shows just how divided Australia was over this issue and showed how Australians citizens attitude as an enthusiastic people which changed people who did not want conscription to be compulsory for all men that meet the requirements to sign up. In 1917 the 2nd referendum was introduced and the majority was still against but not by much. You were seen as unpatriotic and deserting your own men if you did not agree. (Source 3 and Source 4) show the different views of conscription that the nation was faced with.

The United States and the South Vietnamese governments called upon Australia to fight in the Vietnam War because Australia had two contracts in which the Vietnam War fell into this was the SEATO (South East Asian Treaty Organisation) which imposed Australia’s protection against any communist movement and the ANZUS (Australia, New Zealand, United States Treaty). It was announced in April 1962 that Australia was to fight in the Vietnam War as it was seen necessary. Many Australians supported the war because of their fear of communist advancement and people believed that the ‘Domino Theory’ would occur.

In the First World War we were eager to go to war and were very enthusiastic about it, but in Vietnam we entered because of fear not enthusiasm. This shows how attitudes to war changed in Australia over time and has a high impact on society. During the First World War Australia held two referendums in attempt to make conscription compulsory for males aged 21-34 to serve overseas both of these failed. Conscription was reintroduced in the Second World War and all unmarried males were called up. Conscripts did not have to serve outside of Australia but in 1942 they extended it to the whole South West Pacific.

In 1964 conscription was re-introduced and required all males on their 18th birthday to enlist in the ‘National Service’. This conscription was only for Australia’s own turf and not overseas. But in May 1966 conscripts where chosen by a random birth date lottery and where sent to Vietnam. When the first conscript was killed in action many Australians started to question its involvement in the war and wether these sacrifices where needed. People began to see war as not a political level more of a personal level as the Australia Armies normally consisted of volunteers.

In 1965 the peace in Australia changed a great deal because protest movements began, Conscription was a major motivator in people’s participation in the protest against the war. The Protest movements started when many groups formed such as the ‘Protest Meeting Committee’, ‘Save Our Sons’ and’ Youth Against Conscription’. Conscription fueled protests as it affected everyone. It was people’s sons; brothers, friends and relatives that were getting called upon to serve and that were killed involuntarily. Between 1965 and 1966 there was over eighty reported demonstrations of protest movements in Australia.

These included strikes, marches, teach-ins, candlelight, processions protests and folk concerts. Most of the protest groups opposed the conscription of youth for overseas service. The protests had a high impact on society and many people attitudes began to change towards the Vietnam War and in August 1969 55% of Australians favored withdrawing the troops in Vietnam. In 1970 more than 200,000 people marched in the streets of Australia’s major cities in protest which showed that Australia was strongly against what the government was promoting.

The Vietnam War was the first televised war in Australia, the true horrors of war where seen in Australian homes and to public eye. This changed the attitudes of many Australians when they saw the horrific truth of what was happening in Vietnam with this was seen very personal. Press released reports of torture to prisoners such as being thrown from helicopters and mass massacres. The media and television was not censored and raised ethical questions about war. This quote was often stated during the war ‘The camera doesn’t lie’.

This ha a huge impact on Australian society and helped fuel protest movement groups to get Australia soldiers out of Vietnam. When the Vietnam veterans came home they where frowned and Australia did not want to have ties with the Vietnam War. Many veterans returned at the dead of night to welcome home parades it was nearly 20 years before they were finally recognised. The changes of attitudes to the soldiers in World War 1 and Vietnam were tremendous. It seen as heroic to be a soldier and if you did not fight in the war that you were a coward where as in Vietnam you were frowned upon for fighting.

People thought that the Veterans brought shame to Australia. It is evident that the attitudes towards the veterans from Vietnam did change over time. In 1987 the Vietnam Veterans were given a welcome home parade in which they truly deserved. Even though the war ended in 1975 the veterans were truly grateful for their long awaited recognition. 25,000 veterans walked in the parade in Sydney but it wasn’t until 1992 that the veterans felt that Australia had finally accepted them as Vietnam veterans.

This happened when the National Memorial for the Vietnam War was unveiled and Canberra’s ANZAC parade. This gesture acknowledge the once vindication that Australians showed towards the Vietnam Veterans and the war and how they regretted the injustice and shame they showed to the veterans by regonising their contribution and efforts. Even today Australian’s regret they’re turning a blind-eye on veterans when they returned home and going on with life like the Vietnam War never happened. “This was Australia’s longest war, yet we treated the returning veterans with shame.

And so, we remember,”(Source 6) this source emphasis’s on the fact of the truly degrading attitudes we showed towards the Veterans and how we regretted it. Over time the idea of peace has changed in Australia at first we went into to war to fight for peace but by the time Vietnam War came around it was seen that the fighting in wars were disturbing the peace. During the Vietnam War people protested for what they believed in and caused Australia’s home front peaceful nature to be disturbed.

Some thought that many of the protesters where hypocritical as they where against our men fighting but some of their protest encouraged violence. War tested Australia as a new nation and helped Australia form a national identity. With the different attitudes that Australia showed during all the wars it is hard to predict how we would act if a war broke out today. Australian ANZACS are known as brave and individualistic whereas most of the time the Vietnam Veterans were known as baby killers.

Australia’s view towards war and peace were influenced by social, cultural and political components. With the act of heroism the soldiers showed in World War 1 it formed a nation of unity that supported the war and government. The Vietnam War was completely different where not many supported the government and society protested against Australian soldiers fighting in Vietnam War. The attitudes towards war and peace have changed over time in Australia from a nation that went along to a nation that protested for what they believed in.

What are the changing attitude of Australians towards war and peace?. (2020, Jun 01). Retrieved from https://studymoose.com/changing-attitude-australians-towards-war-peace-new-essay 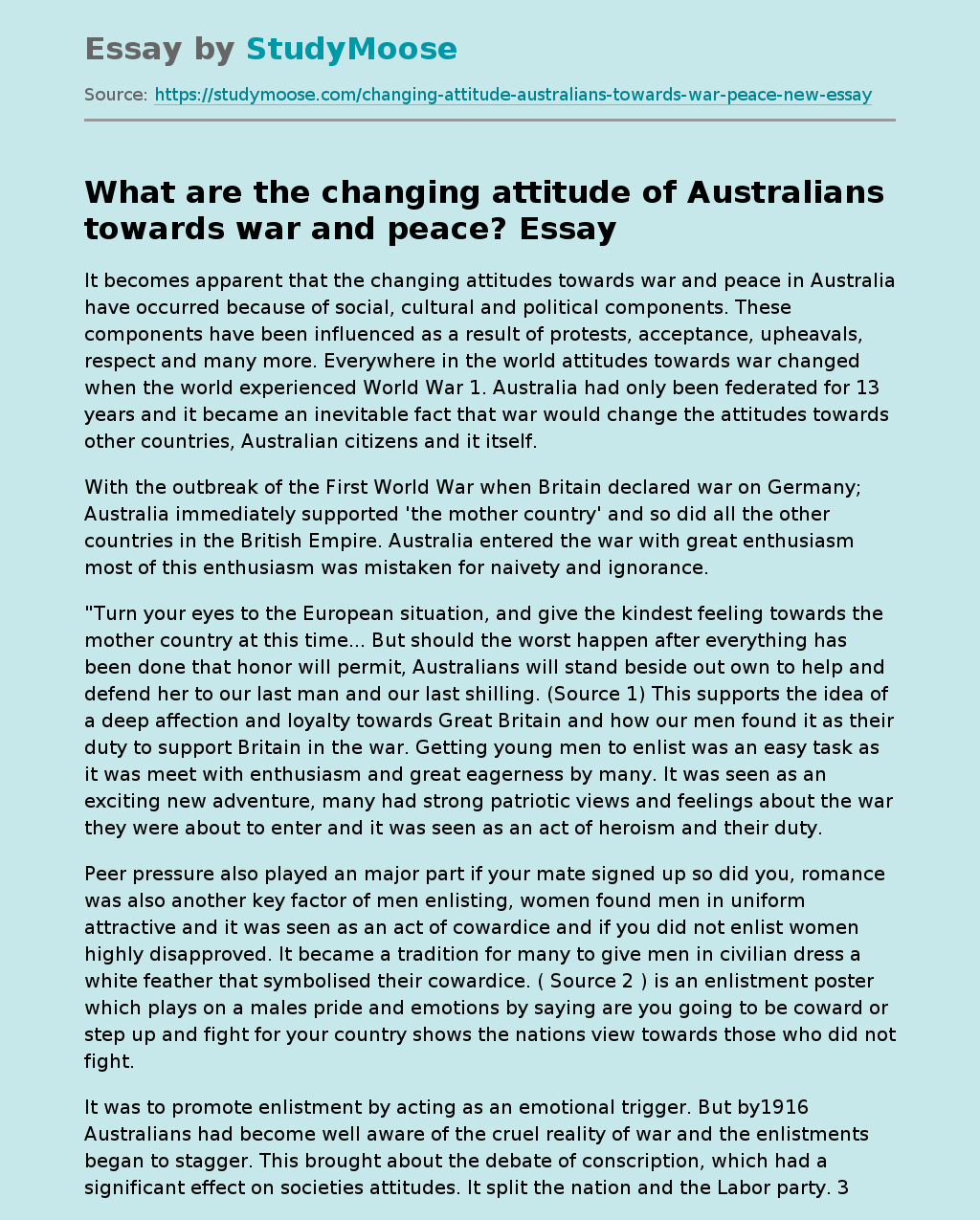