As we move through the September of 2017, a feeling of bitterness sweeps through the progressives of South Africa: this month commemorates the 40th year since the killing of Steven Bantu Biko. His philosophy of Black Consciousness is deeply rooted in the notions of Negritude. Biko’s claim that “the most potent weapon of the oppressor is the mind of the oppressed” pays homage to this link as Negritude focuses on forming a unique, black identity and hence liberating the black mind from the desire to assimilate to whiteness.

Don't use plagiarized sources. Get your custom essay on
“ Steven Bantu Biko’s Attitude Towards Negritude and Black Consciousness ”
Get custom paper
NEW! smart matching with writer

Jazz is a fundamental link to black history as it tracks the progress of black people arriving as slaves in the United States. It acknowledges elements of blackness both musically and historically. This is why in the first paragraph of my essay I analyse the importance of Jazz in terms of its orientation to Negritude. Not only is it an expression of what it means to be black, but it is a highly intellectual and emotional genre of music- an intellectualism encouraged and grown by the Negritude movement.

After analyzing Jazz, I then grapple with the intricacies of Charlie Parker’s piece, Koko (1945) and how, contextually and musically, he propagates the celebration of black identity. As mentioned with reference to Steve Biko, the ideas of Negritude play a significant role in South Africa’s liberation from apartheid, colonialism and neo-colonialism. Hence, I unpack Hugh Masekela’s ‘Stimela (1974) and how this remembers black history as well as challenging the liberal paradigm of how history is captured.

Culture is revered as an essential part of many social movements; not only is it influenced by revolutionary ideas, but perpetuates them.

The framework for identity can be captured through history, as writes the scholars Onweumere and Egbulonu:

“I have always thought that the black man was searching for his identity. And it has seemed to me that if what we want is to establish this identity, then we must have a concrete consciousness of what we are, that is, of the first fact of our lives: that we are black; that we were black and have a history, a history that contains cultural elements of great value, and that Negroes were not, as you put it, born yesterday, because there have been beautiful and important black civilizations” (Onwumere and Egbulonu, 2014).

Jazz primarily captures African American history as well as its movement across continents, highlighting its pan-African and all-inclusive-of-blackness nature. Although some features of instrumentation and melody can be associated with classical music, Jazz has a unique birth which is quintessentially black. It is impossible to speak about Jazz with out talking about blackness. Slavery gave Jazz life. African people forcibly transported across the Atlantic would sing work-songs as a way to pass the time engaging with monotonous but strenuous work as well as forming a sense of unity with other slaves (Stanbridge, 2004). Post slavery, this grew into ragtime and then the Blues. Blues, as the name would suggest, references the hardships of life: from heartache to subjugation. Furthermore, Blues still had African musical elements. For example, a distinctive Arabic/Islamic song style, which is reminiscent of Hausa culture. Melisma, wavy intonation, pitch instabilities within a pentatonic framework, and a declamatory voice characterize this style (Stanbridge, 2004). Sudanic music is typically written in a pentatonic scale with a regular meter, but with notable off-beat accents. These elements can easily be found in Blues. This shows how the pan African ideal of Negritude permeates Jazz: even as a black genre of music grows, it is still deeply rooted in African tradition. Jazz then travelled with much of the African American population from New Orleans to Chicago to New York, growing into free jazz, Bebop, hot jazz and many other sub-genres. While music is characterized by sharing, adaption and appreciation, with this complex and vast history in mind, black people have every right to reclaim their ownership over Jazz, as a reclamation of their truth.

The Bebop visionary, Charlie Parker, reclaims this truth in his famous piece Koko (1945). Through the white appropriation of Jazz, the sub-genre, Swing, was born. Bebop musicians actively broke away from Swing with its strictly controlled rhythm and contrapuntal improvisation. This break away was both racial and musical. A racial divide and opposing geographical influences are also evident in the comparison between these two styles. Both social and habitual segregation as a result of the United States of America’s racially charged history are portrayed through the contrasting layers of each style. Koko (1945), and Bebop, implicitly references Jazz’s African roots by emphasizing the importance of complex, syncopated rhythm, a critical element in percussive African music. The rhythms are disorienting – not because the tempo is extraordinarily fast, but because the accents are constantly shifting, sometimes accentuating the downbeat. A famous moment in jazz history, and a definite reclamation of the blackness of jazz can be found in this piece. Charlie Parker, one of the giants of modern jazz, shows his connections to the past by quoting a phrase from New Orleans jazz: the clarinet solo from High Society (1940). Koko (1945) is a performer’s music rather than that of the audience. As in Negritude, it prioritizes individual expression through its emphasis on improvisation, while still engaging in a musical conversation with the rest of the band i.e. acknowledging the importance of the whole group. When asked about Koko (1945) Charlie Parker was, quoted as saying: “I found that by using the higher intervals of a chord as a melody line and backing them with appropriately related changes, I could play the thing I’d been hearing. It came alive.” This intuitive and emotional relationship with music is reminiscent of the dichotomy emphasized, but also challenged, by Negritude scholars, where whiteness represents rationality and reason and, opposingly, blackness is linked to emotion. While this iconic piece of music does not explicitly reference the philosophical ideals of Negritude, it implicitly acknowledges the importance of black history, identity, significance of emotion and instinct through its combination of musical elements.

Likewise, Hugh Masekela taps into this understanding of the importance of emotion in his piece, ‘Stimela (1974). The primary focus in my interpretation of this piece is the remembering of a pinnacle feature of South African black history- migrant labour. In an era where the black population are encouraged by their white counterparts to move on from history and revel in collective amnesia (Koleka Putuma) in order to reap the benefits from democracy, this timeless piece promotes the importance of the unique aspect of black history: the strength which has been historically mustered up to overcome exploitation. My second point of analysis with regards to Negritude is the manner in which history is told through this piece. Senghor, a crucial figure in the Negritude movement, claims that “Classical European reason is analytical and makes use of the object. African reason is intuitive and participates in the object.” “Stimela (1974) challenges the liberal paradigm that claims the social sciences to be scientific. Masekela uses the train as a symbol for of black experience and pain. His singing is onomatopoeic of a train and he uses the trumpet in a way which resembles a desperate cry. This musical retelling of the coal mines conceptualizes a story that the Western, liberal paradigm of knowledge cannot, because it does not render emotion as a legitimate feature of history (Reddy, 2016). Negritude supports the inclusion of emotional experiences as a part of black identity but also propagates the idea of rewriting and reconsidering history from the perspective of black people. ‘Stimela (1974) engages with the poetics of loss. Loss is not just something that is material and can be unlost through land redistribution or reparations- it is the loss of one’s family through forced removals and the loss of a sense of humanity. Since loss is not exclusively empirical, it can be said that reclaiming what was stolen is also a psychological matter. This is exactly what Negritude attests to: the emancipation of the mind and paving of a uniquely black path that acknowledges these losses.

Music, in particular Jazz, is inherently and deeply evocative of feelings and associations of the past, in the same way that Negritude encourages the black paradigm of engaging with emotion. Moreover, the genre of Jazz cannot be separated from Africa American identity with specific reference to slavery. This acknowledgment of history and recreation of identity is found in the notes of Charlie Parker’s Koko (1945). His piece and the genre of Bebop explicitly reacts against the white appropriation of Jazz evident in swing music. Parker’s emphasis on emotionally relating to music and improvising is another feature reminiscent of how blackness is defined according to Negritude. Similarly, Hugh Masekela’s ‘Stimela (1974) tells a disturbing part of black people’s history in South Africa as well as reimaging how history is told through a decolonial lens. Negritude is evidently an imperative aspect in cultural expression. However, Wole Soyinka saw it as a form of alienation. His famous quip: “The tiger does not proclaim its tigritude. It pounces.” But through this review of some aspects of black culture, I think it is appropriate to say that the tiger cannot pounce without realizing the strength that comes with being a tiger- it might not even know it has the ability to pounce. Culture enables this realization. If, as Biko claims, the most potent weapon of the oppressor is the mind of the oppressed, then let music, art and performance, be the tools by which this weapon is liberated. 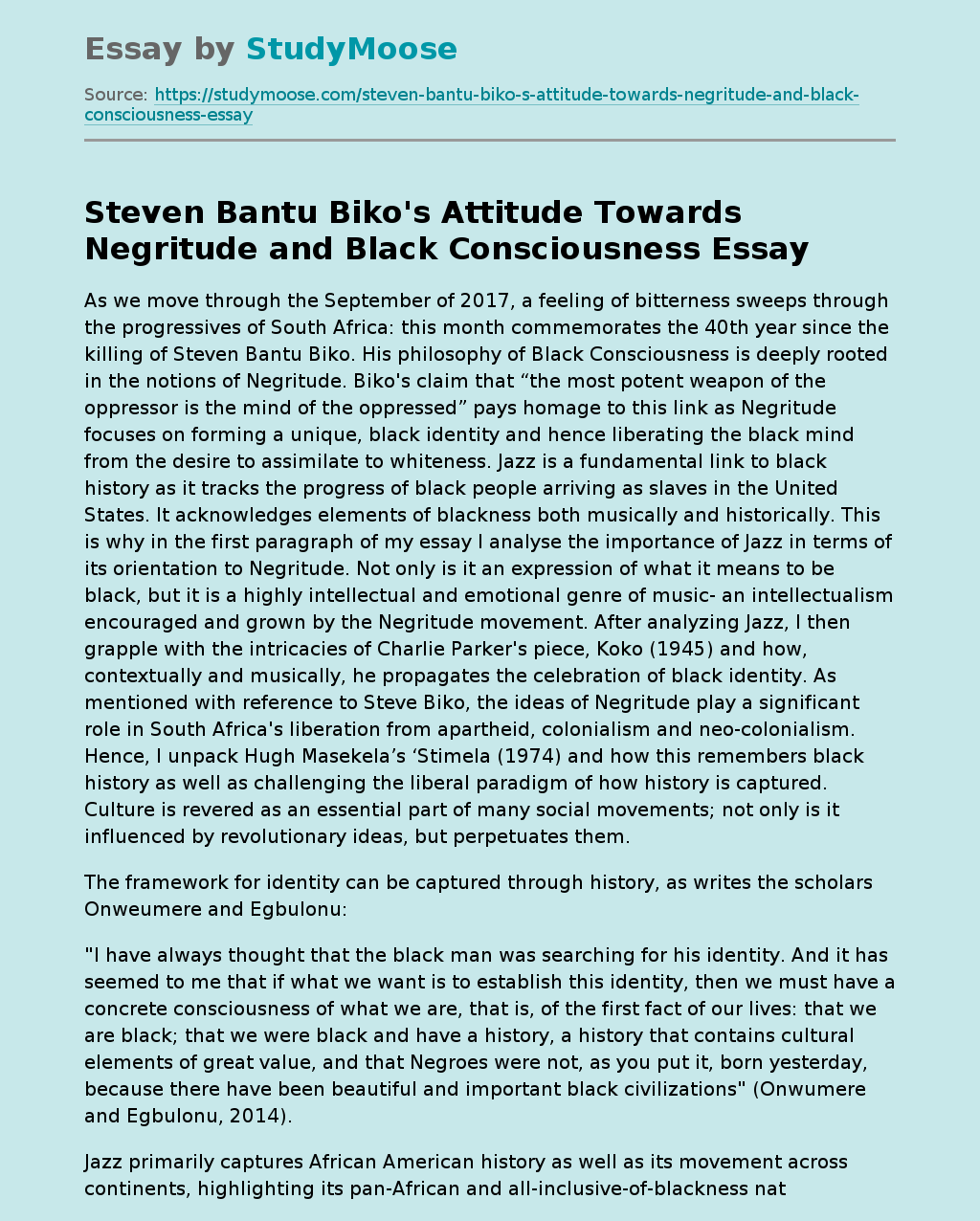