In 1914, it was the first moment of when Australia’s joined World War one, The Australian government decided that it was a mature move to support its “Mother Country’ Britain. Australians were proud of being part of the British Empire; it was the biggest empire the world had ever seen rivalling over many great ancient empires such as the Romans. Australian’s felt proud to be a part of the empire because Britain had always supported and protected them all as individuals and they felt it was time for them to show their bit in joining in to fight along with Britain in war.

Don't use plagiarized sources. Get your custom essay on
“ Why Australians Joined World War 1? ”
Get custom paper
NEW! smart matching with writer

Australians joined world war one also for their patriotism, their love for Britain and they felt the need to defend Britain in this war, to show their willingness to fight, and for their duty because they thought it was legally right and obligated for them to be a part of something so big and to give a big helping hand for their Mother country, they thought it would be a good opportunity to improve Australia’s international reputation also showing how loyal they are to defend Britain in such extreme choices to participate in a war with much countries much more powerful.

Australians also felt a sense of security, because of the countries surrounding them that were much more powerful and threatening, they thought that the British empire would come together to defend Australia in that time of need, and this was important to Australia because the population was small, and not much could have been done if they had no one else to defend them.

Many Australians joined the war for a variety of different reasons, some wanted to prove that they are brave enough to fight in such extreme levels of danger in war, in possibility of death, also some men enlisted towards WW1 because their choice of their friends influenced them to do it, and some didn’t want to face it all alone. Some men were very poor, and needed money to supply for their family, for their children, to buy clothes, to pay bills, to feed their family and even for a job.

Some men thought it would be a good way to prove their own strength and show that they weren’t cowards, they wanted to show honour and fight and even die for their country, so when they came back alive it would show that they are the right men to be proud of, that they would do anything to sacrifice their people and their country. Men were also peer pressured nto joining world war one by fellow peers, if they didn’t sign up to be a part of World war one they would be scorned upon by from society, they would be considered a coward, not truly someone that should be a part of the country, like they were not worthy, if they didn’t sign up they would receive white feathers in the mail which was a symbol of being a coward, this was an act of peer pressure that influenced the choice of men going to war, which was a big impact on the numbers changing since they didn’t want to be named a coward.

Also another reason Australians joined World War 1 is because of the advertisements being published all over their town stating how war would be really fun and a great new type of sport for young men to be involved and help out in, it begged Australian men to join to fight for their country , also because Men would receive regular pay from the government for being a part of the war, and gave great bonuses for anyone to join that attracted young men in young families to join so they could support their families The first primary Source I will be talking about is:

This poster is named, Follow Your Mates Enlist. , NSW Recruiting Committee and Win the War League, NSW. This enlistment poster would persuade and peer pressure young Australian men to join the War because of their friends choices as well, they wouldn’t want to leave one of their mates behind, they would try and do anything they could to help them out during this time, and always would want to be there with them through every step of the way because all Australian men are like a brotherhood and wouldn’t want to leave one brother to go since they are all one country.

This poster is named, Wood, Lawson, 1914, Your King & Country Need You, Parliamentary Recruiting Committee, Australia. This enlistment poster would make all Australian young men want to join the war because of their loyalty and duty towards the British Empire, All Australian men felt the need to have defence over Britain, always to protect them because they are a part of their empire, it is telling you that they need you, and to honour them you join the war to show your loyalty and compassion, or else you would be known as a coward.

This poster was an Image of a Australian World War One recruiting poster, courtesy of the Australian War Memorial, to encourage and put pressure on men to go to war for their families, it was directed to men with a wife and children. It also appealed to women with small children to encourage their husbands to make the future safe for their children by going to the war, so the family can rely on him for protection and if the father didn’t go then he would feel disappointed. 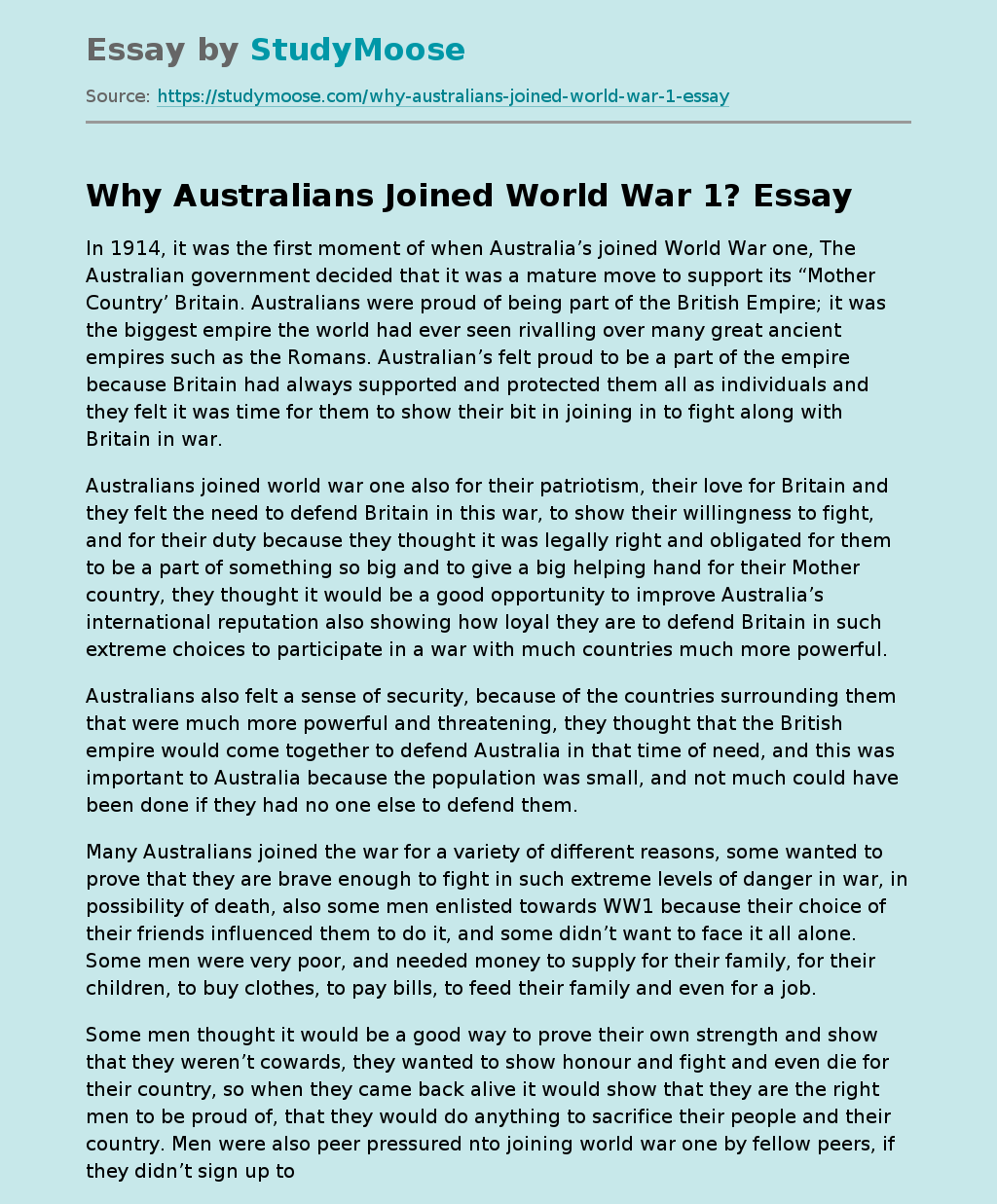