A Bill of Rights for Animals?

An organization called the Animal Legal Defense Fund has sponsored a petition that raises the awareness and calls for increased protection for the rights of animals. An excerpt from the petition briefly touches on how “animals are defenseless against exploitation and abuse by humans.” Alongside, it also informs us the objective of the petition that “through the Animal Bill of Rights, the Animal Legal Defense Fund is working to show Congress a groundswell of support for legislation that protects animals and recognizes that, like all sentient beings, animals are entitled to basic legal rights in our society.

” In our society today, animals are brutally abused, treated unfairly, neglected or have experiments conducted on them. This bill is pushing for a basic set of rights aimed at animals to protect them, although many people disagree. The petition, I believe, could change a lot in the world today. I agree with the defense fund of passing this petition for animal rights and that all animals should be treated as equal as humans.

The Animal Bill of Rights can stop animals from being abused, experimented on, and innocently dying.

By passing the Animal Bill of Rights, it is understandable and true that it would decrease the amount of animal abuse that occurs. In Jeremy Rifkin’s article “A Change of Heart about Animals”, he provides evidence that “studies on pigs’ social behavior funded by McDonald’s at Purdue University, for example, have found that they crave affections and are easily depressed if isolated or denied playtime with each other.

The lack of mental and physical stimuli can result in deterioration of health”. Similar to humans, it exemplifies that animals crave and desire affection for means to survive. Pigs have similar characteristics and traits as human beings do.

They have the ability to eat, sleep, play, feel pain and express emotions. In the case of a human, if someone lacks attention or love and support, that person would become depressed easily, fall into a state of gloominess and darkness as well as possibly develop a mental illness. This is similar to the events of an animal that has been abused. Through this example, it explains that animals are similar to humans in terms of characteristics and behavior and that animal abuse has drastic effects on animals, so therefore we should enact a bill of animal rights to protect them from abuse and inhumane circumstances.

As human beings, we tend to conduct experiments on many products and things on animals more than our own species. There are many different experiments conducted and used on all kinds of animal species which endanger them and lead to their slow deterioration of health. I personally believe that scientists should not be allowed under any circumstances to do unnecessary experiments on animals. My main concern towards this stems from the fact that most of these animals don’t survive the entire experiment. Somewhere throughout they give out and their decline in health status leads to their eventual death. It’s unjust and not right to instantly end the life of an animal, similar to ending a human’s life in a cruel manner. In addition, the killings of these innocent animals provoke little or no remorse from us humans.

Most people have the viewpoint and perception that animals have no self-consciousness and don’t feel or suffer pain. But in “Hooked on a Myth” by Los Angeles Times reporter Victoria Braithwaite, studies show that animals such as fish do in fact feel pain. She conducted a study along with fellow colleagues and concluded that “…fish have the two same types of nociceptors that we do…” Nociceptors are specialized nerve endings that alert our bodies when we feel or experience pain. Studies and research has shown that animals such as fish do in fact have alert-like functions that help them detect pain. This concludes that conducting experiments on animals is wrong and unfair as well as adding to the fact that animals do in fact have the ability to feel and experience pain, which brings them even closer to deserving rights like humans do in our current day society.

Many people today take advantage of animals and neglect and torture them in many ways unimaginable. Common animals such as dogs, cats, hamsters, goldfish, etc. have been starved, ignored, abused, and treated unfairly by their owners. I think that the Animal Bill or Rights would drastically reduce the amount of stray animals without a home as well as the number of abused and mistreated animals. Many don’t see or realize that neglecting an animal hurts them emotionally and physically. Animals aren’t very different from humans and they do in fact have feelings. Rifkin states, “They feel pain, suffer and experience stress, affection, excitement, and even love”.

Animal abuse hurts our human society as well as the animal race. Abusing innocent animals isn’t a proud accomplishment and in fact is a demeaning act of violence in a sense. If you were to tell a child it was okay to torture an innocent animal, don’t you think that same child would think that it’s acceptable in society to harm a human being? Since they’re very similar to each other? I believe so. Animals therefore should have equals rights that protect their liberties and their lives. It is inhumane, unjust and cruel to treat animals with no regard compared to humans when really they are very similar to us than we have perceived them to be.

The Animal Bill of Rights is a petition that proposes increased protection for the rights of animals and will prove to be helpful in many, many ways. Regardless if it’s saving an innocent animal, or changing human behavior and becoming more kind and loving, we should in all make animals feel accepted and like they’re a part of our society. I agree that there are some parts of the bill that could be adjusted and revised, but I have faith that changes will be made for the better. Animals are a definite part of the world we live in today. Being more humane and kind-hearted towards animals would make us as humans appreciate the animal species, avoid the suffering and pain an animal could potentially go through, and overall live healthy and non-violent lives. Accepting animals and issuing them rights will make us better people as well as give animals the protection they need to live safe, happy and healthy lives.

A Bill of Rights for Animals?. (2016, Sep 18). Retrieved from http://studymoose.com/a-bill-of-rights-for-animals-essay 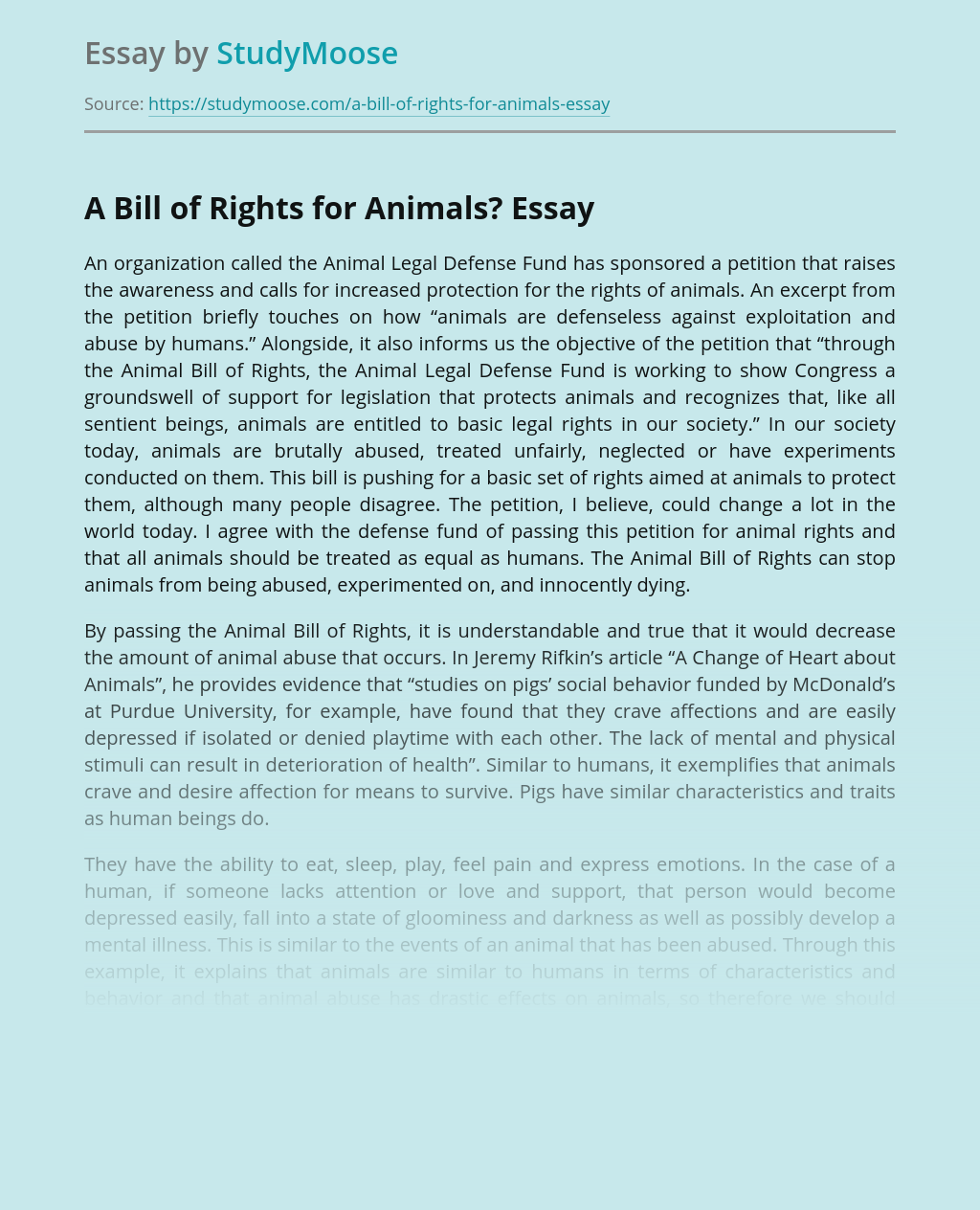 Don’t waste time
Get a verified writer to help you with A Bill of Rights for Animals?
Hire verified writer
$35.80 for a 2-page paper
Stay Safe, Stay Original