Federalist papers and Bill of rights

But the Convention collectively turned down the proposal by a vote of 10 to 0.

Don't use plagiarized sources. Get your custom essay on
“ Federalist papers and Bill of rights ”
Get custom paper
NEW! smart matching with writer

The Seceders from the state Assembly pleaded their voters to consider whether the rights of the citizens could be deemed safe under a constitution which did not include a bill of rights. James Wilson in response to the charges voiced a thesis which differentiated between a government of infinite powers and government of specified and distinct powers.

The previous were independent in their power and had no restriction to exercise any powers, but the second could only exercise powers which it disposed of under the Constitution.

There was no fear that the federal government could intimidate the rights of the nation in such issues as freedom of the press, freedom of religion, because it was incapable to operate in such fields. Wilson clarified: Two kinds of government have been observed. In the first kind, the legislature is provided with the general power, and particular enumeration is kept regarding these powers.

In the second kind, the nature of the government results in the provision of the powers, and enumeration is given more significance.

A bill of rights would not be necessary in the proposed form of a government. It has been indicated that the rights of conscience have not being provided the security. It would be important to inquire the power of Congress in relation with their implementation for the attacking of these rights in the system.

Preparation for the means of defense would be idle, if no power of attack will be available. According to Justice Thomas McKean of the Pennsylvania judiciary: “[I]t has already been incontrovertibly shown that on the present occasion a bill of rights was totally unnecessary, and that it might be accompanied with some inconveniency and danger if there was any defect in the attempt to enumerate the privileges of the people.

This system proposes a union of thirteen sovereign and independent states in order to give dignity and energy to the transaction of their common concerns. It would be idle, therefore to countenance the idea that any other powers were delegated to the general government than those specified in the Constitution itself. ” Given the importance and centrality which the question of a bill of rights took up in the fight over ratification, it possibly would have been anticipated that the authors of the Federalist would answer to this complaint by immediately issuing a refutation.

After all, in Federalist 1 Hamilton explained the rationale of the series, besides explaining the deficiency of the Articles of Confederation for conservation of the Union and the virtues of the new Constitution, the series would also “endeavor to give a satisfactory answer to all the objections which shall have been raised against the Constitution. ” Nonetheless, the truth was that the Federalist Papers remained silent on this matter until almost the end of the essays. In Federalist 84 only, Hamilton tackles the question of bill of rights.

As Jack Rakove justly said “a sort of afterthought, in the process of tying up all loose ends. ” Surprising Madison appears to have totally overlooked this subject, comforting himself by simply declaring that the Articles of Confederation were likewise without a bill of rights. This laughable response to the uproar of the Anti-federalists also seems to ignore the view of Madison’s teacher, Thomas Jefferson, who in a letter to him stridently confronted Wilson’s thesis that a bill of rights was not required for a government having narrow powers.

The thesis, was “gratis dictum and opposed by strong inferences from the body of the instrument of the Constitution,” Jefferson said. He also declared that, “A bill of rights is what the people are entitled to against every government on earth, general or particular [i. e. national or state], and what no just government should refuse, or rest on inference. ” “In 1798 the U. S. Congress adopted the Alien and Sedition laws which, in the view of most subsequent commentators and opinions of the U. S.

Supreme Court, violated the Bill of Rights that had entered into force some seven years earlier. Obviously, neither the thesis of Wilson nor that of Madison had operated to prevent the adoption of laws which were clearly partisan and inhibitive of freedom of speech and of the press. On the other hand, Hamilton’s thesis would seem to have been vindicated, since Jefferson’s victory in the 1800 elections was inspired, to a considerable degree, by the electorate’s condemnation of the conduct of the Federalists in infringing the liberties of the people.

In the words of one prominent constitutional scholar, “the constitutionality of the Sedition Act … was decided by the people in the national elections of 1800, which drove the Federalist Party out of office and into oblivion. ” While in this instance even the Bill of Rights only served as a parchment barrier in protecting rights, ultimate justice was enforced by the democratic right of the people to select the government of their choice and thereby determine the laws by which they shall be governed.

This pattern of events gives rise to the engaging thought that perhaps Hamilton had it right after all, and the Bill of Rights merely made explicit what was implicit in the Constitution from the beginning. In later years, thanks to the adoption of the Fourteenth Amendment and the jurisprudence of the Supreme Court, the parchment barrier was to assume an entirely different and much more formidable character in guaranteeing individual liberty”.

Federalist papers and Bill of rights. (2017, May 24). Retrieved from https://studymoose.com/federalist-papers-and-bill-of-rights-essay 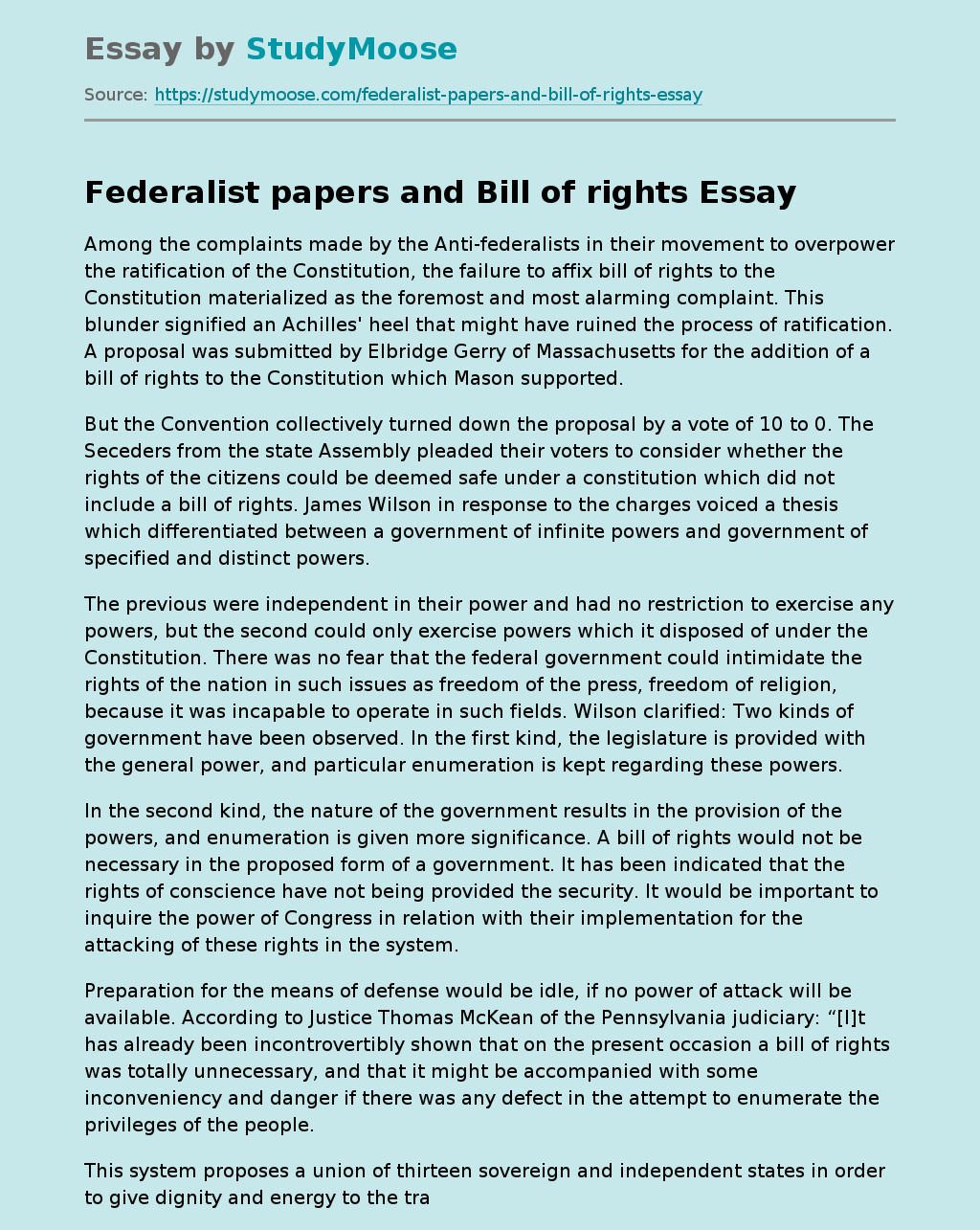