In a study, “Papers and Boards from Banana Stem Waste” in which they used banana stem waste in producing paper and board because banana is a very good source of cellulose. Banana stem waste, thrown away by farmers after harvesting of fruits, was procured as raw material. It was chopped by 3-4” size usually at a rate of about 100 kg material per day. The material was soaked in 1-2% NaOH for appropriate period. The alkali loosens the ligno-cellulosic bonds, thereby softening the material.

Don't use plagiarized sources. Get your custom essay on
“ Papers and Boards from Banana Stem Waste ”
Get custom paper
NEW! smart matching with writer

Then it was washed with water. The washed material was then subjected to beating in a Hollander beater, a machine developed by the Dutch in 1680 to produce paper pulp from cellulose containing plant fibers. A period of three to four hours of beating was required for getting a good quality of pulp. It was observed that depending upon the quality of boards to be produced, appropriate amount of fillers, loading material or chemicals were used during wet beating.

For production of hard boards, suitable quantity of resins like urea formaldehyde and phenol formaldehyde are added in the beater itself while maintaining pH. The wet boards are then allowed to dry under direct sun on bamboo frames specially made for this purpose.

Handmade paper from rice straw was a product developed by the Forest Products Research and Development Institute (FPRDI), a line agency of the DOST. In 1986, the technology was fully developed and the product was commercialized locally. The major material input used for the production of handmade paper was rice straw, an agricultural waste which was available in abundance locally.

The other inputs which were also available in the domestic market were sodium hydroxide, sodium or calcium hypochlorite and paper additives such as rosin size, starch and alum (aluminum sulfate or tawas). Rosin size was used to prevent liquid penetration and make paper smooth, alum to enhance cohesion of the fibers and starch to bind fibers together. The pulping process involves the boiling of rice stalks in two percent sodium hydroxide solution, with liquor to material ratio of 10:1, for about two hours until the stalks become soft.

The stalks are drained right after boiling and transferred into a screen-bottom box. Then, the stalks are thoroughly washed with water at least three times and pounded with a wooden mallet. After pounding, the pulp is screened by under high water pressure using a double-decked screen box. Bleaching of the pulp may either be a single or multi-stage procedure depending on the desired colour of the paper. After every bleaching, the pulp is thoroughly washed with water. Paper additives such as rosin size, starch and alum are added to the pulp and the mixed substance is stirred continuously. Then, the mixture is laid on a dry and flat surface. Finally, the mixture is pressed down with a rolling pin or pressed to form the sheet. However, in this study their major ingredient in making the paper was rice straw while our major components were banana fibers and stalks.

The aim of the experiment, “Use of banana tree residues as pulp for paper and combustible,” by Rosal, A., Rodriguez A. Gonzales, Z. and Jimenez, C. (Accepted 23 March 2012) was to evaluate the optimal use of banana tree residues, by two ways: first by subjecting them to pulping process with soda-anthraquinone as pulping liquor, studying the influence of operating variables on the properties of the pulps and the corresponding paper sheets obtained from them; the second way is to use them as fuel, determining the heating values, flame temperature and dew point temperature of the combustion gases, comparing their values with those found for other lignocellulosic materials.

The pulp was obtained by using a 15-L batch cylindrical reactor that was heated by means of electrical wires and was linked through a rotary axle (to ensure proper agitation) to a control unit including a motor actuating the reactor and the required instruments for measurement and control of pressure and temperature. The banana tree residues were pulped in the reactor under certain conditions of soda concentration (7.5 to 12% w/w), anthraquinone concentration (1% w/w), temperature (160 to 180°C), time (40 to 60 min) and liquid/solid ratio (8:1 w/w). Next, the cooked material was fiberized in a wet disintegrator at 1200 rpm for 30 min and the screenings were separated by sieving through a screen of 1 mm mesh size. Paper sheets were prepared on an ENJO-F-39.71 sheet machine according to the TAPPI 220 standard method.

They concluded that The pulping of banana tree residue with soda anthraquinone require a low cooking conditions (160°C, 40 min and 7.5% soda), providing a pulp with suitable properties (39.23% pulp yield, 28.59 Kappa number, 48.25% brightness, 1149 ml/g viscosity, 48.0 Nm/g tensile index, 3.80 kN/g burst index and 4.83 mNm 2/g tear index). From an energetic study of the banana tree residue, it was deduced that banana tree residue have a heating values of 17751 kJ/kg, a flame temperature of 1300 to 2400°C and dew point temperature of 4 to 54°C, for different values of excess air (10 to 50%) used in combustion. These values are similar to other non-wood lignocellulosic materials. The price of the energy (kJ) obtained by combustion of these residues was less than coal and much lower than those of fluid fossil fuels.

Another experiment was made by Jesus Rubalcaba, Satoki Okamoto and Miguel Lozano about Banana Paper. In their experiment, their major ingredient or the material that was important was the banana leaf. They cut the banana leaves into smaller pieces and blended it. Mix that blended pieces by five cups of water, dip the frame in the pulp and spread the pulp with hands. They take the frame outdoors ang let it dry for one day. It was concluded that the banana paper held its shape without crumbling apart. It was so unappealing and the quality wasn’t great. This study helps and guides us not to use banana leaves in making the banana paper wherein the results was not good enough. Base on their observations, it was strong enough to hold its shape but it was lumpy and brownish which makes the product not very appealing to the eyes. Thus, many would not be interested in buying, using and making it. The banana leaves weren’t strong enough compared to the banana stalks and fibers.

According to a book written by Irmengarde Eberle, a conveyor belt feeds the needed logs from the wood yard into the mill. There they are put into a debarker- a large, slowly –turning iron drum. Strong streams of water are poured in from the vents in the sides. The debarked logs then roll out of the drum and move along on a conveyor. Now according to what kind of paper or paper board is to be made, the wood is either chipped or ground. For most papers and especially for the better kinds, it is chipped. For coarser grades, such as newsprint, it is ground.

The logs that are to be chipped are moved along to a special room. There they are passed to a machine equipped with strong, sharp blades. These cut he wood into small pieces. Next the chips are sent over screens, which sift out bits of the remaining bark. The cleaned chips are carried to great storage tanks. Mill workers take chips from the storage tanks selecting the particular kinds required to fill each other. The selected chips are carried by a conveyor belt to a machine called a digester. Here, the mixture of water and chemicals including particularly sodium hydroxide, which is really lye, or caustic soda, awaits the chips. When the wood has been fed into the digester, it is closed. Immediately it is very hot steam, under great pressure, is let in. This steam “cooks” the chips, together with the water and chemicals, for several hours. How long this takes depends again on the kind of paper the wood is being prepared for, and the variety of the tree from which it comes.

From the cooker, the wet, fibrous mass passes to the bleaching room, where it goes through a series of treatments in several successive tanks. In the course of this, the pulp becomes a light tan and still more of the remaining lye is washed out, along with other chemicals. Finally, the pulp becomes snowy white and has a kind of granular fluffiness. It may be taken to a storage tank again. When the mill is ready to make the pulp into paper it will draw out the wet material and eliminate the water. When the pulp passes into a large broad tank of water, where sizing such as starch or clay is added to give the paper the desired finish. If coloured paper is to be made, the dye is added at this time, too. The pulp passes to a machine, where huge wheel with dull blades beats the fluffy, wet, fibrous material.

Finally, the mass passes on to a part of the machinery called the Jordan, where the fibers are rubbed and cut to the desired length. Now comes with the steps by which the pulp becomes fine paper. Fresh water is added to the pulp and it is moved on to the Fourdrinier, a kind of machine. In this machine the wet pulp is run onto a belt of very fine screen. The screen is in constant motion. Shaking forward and sidewise, it makes the small fibers mesh. All the while, water is again drained off, and the fibers tend to lie in the directions in which the screen belt and water move.

A dandy roll or cylinder, next rolls over the fibers and presses them. By the time the very thin layer of fibers passes out from under the dandy roll, more moisture has been lost. The pulp now has actually become paper, but it is still thick and loosely mesh, it is still wet. The large, endless sheet of unfinished paper is then pressed over rollers smoothly and tightly covered with felt, which press out most of the moisture. Next it is passed over heated drums to dry it still more, and to a machine called a calendar, which presses it again. The sheets are run through the final drying and pressing rollers, and are then ready for cutting. 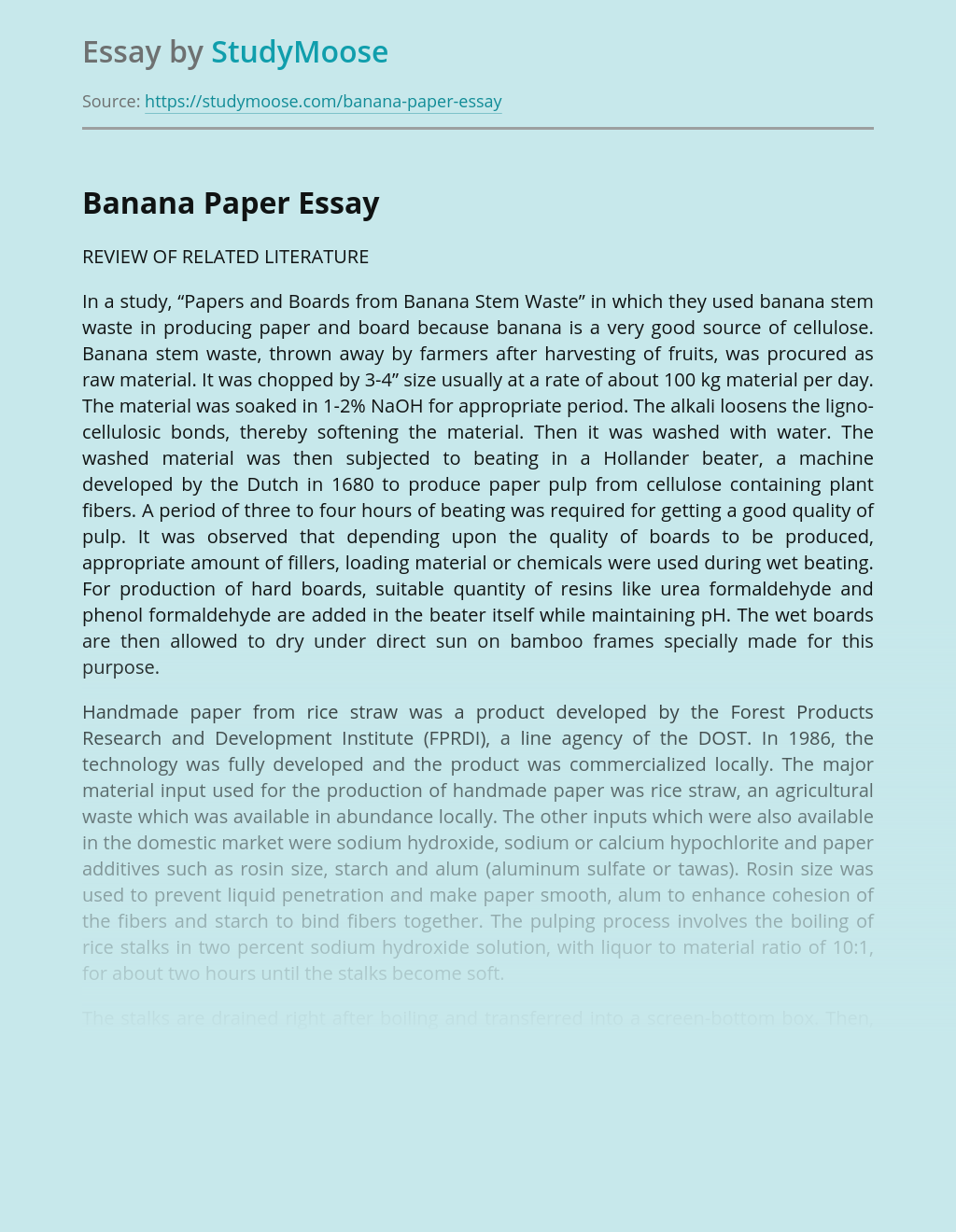