This study entitled “Ethanol Production from Waste Banana Peelings” aims to produce an alternative way in producing energy. Production of green energy from waste material has played an important role in recent days due to the depletion of non-renewable energy resources. Ethyl alcohol commonly called as Ethanol, is found useful widely as an alternative fuel for engines. In view of the growing demand of the ethanol, search of an alternative source for its production has also been increased.

Banana is one of the most familar and widely used fruit.

Don't use plagiarized sources. Get your custom essay on
“ Ethanol Production from Banana Peels ”
Get custom paper
NEW! smart matching with writer

According to the Food and Agriculture Organization of the United Nations, India is the largest banana producing nation. Many items like banana chips, juice, banana cue are made from banana. After the consumption of the flesh, the peelings are just thrown as garbage with no use. India is facing two major problems, energy crisis and proper waste disposal. So, we are here with an idea of using that waste peelings to produce ethanol to help for its increasing demand in the present situation.

The peels of nendran variety of bananas are taken as they are rich in cellulose and are kept in hot oven at 338K and dried sample is taken and is dissolved in hot water for starch extraction through soxhlet apparatus. This solution is treated with amylase enzyme for hydrolysis of starch to occur. It is the subjected to fermentation process by inoculation of S.

cerevisiae for 3 days at 300K which results in the production of ethanol.

Ethanol from the solution is extracted by the Steam distillation which is the most efficient of all the distillation processes. Steam is supplied from the top of the flask in which ethanol solution is present and the ethanol vapours are collected from another outlet and are cooled to obtain ethanol.

The main advantage of Ethanol is its organic origins. Ethanol does burn cleaner than gasoline and also doesnot contain significant amounts of toxic materials like lead and benzene.When Ethanol of 15% when blended with 75% of gasoline is used for vehicles, it emits less amount of toxic substances comparatively.

This experiment finds an effective bio-waste that could be converted into ethanol to help relieve the dependency on oil and the environment. Banana peel is a wastage material by using it we can produce more ethanol because it has more sugar when compared to other household bio-wastages. This also meets the need of energy crisis as well as a solution for the disposal of waste materials. 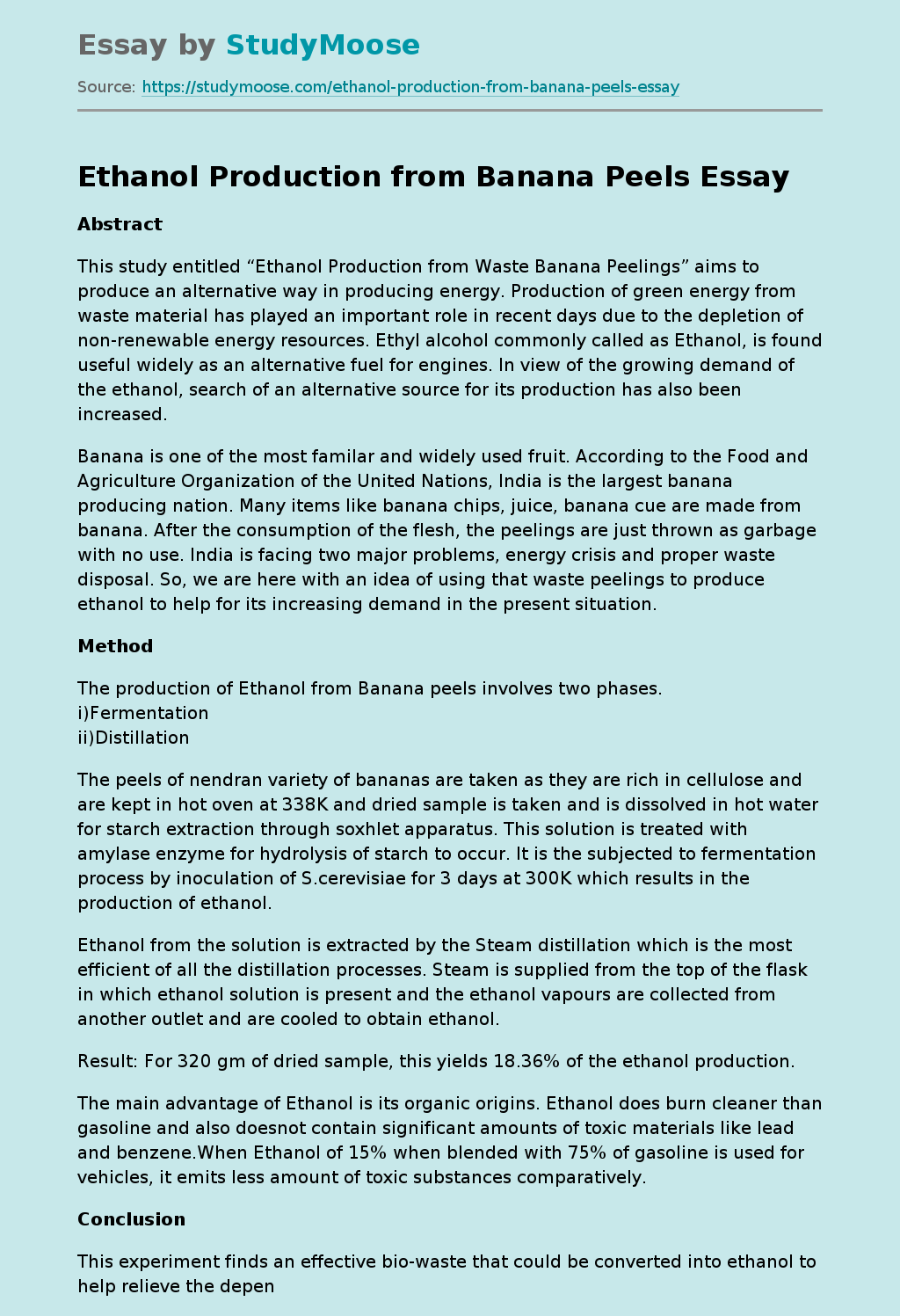