Every country in the world uses energy. For example: to cook. It is becoming one of the basic needs in life. But where does the energy come from? In the year 2008, 85% of the power that we are using was nonrenewable energy, which means that someday, these energies will be gone. However, right now, there are people who have started using renewable energy such as solar energy. There are more than 7 billion people in the world right now and it will keep rising while the energy resources are depleting.

Don't use plagiarized sources. Get your custom essay on
“ World Energy Crisis ”
Get custom paper
NEW! smart matching with writer

Even though there are many energies that are renewable, the renewable energies are harder to make use of, which is one of the reasons why not many people use them. Also, they require some advanced technology. If we don’t find something else to replace oil, coal and natural gas, we won’t have the energy to use in the future.

One of the forms of the renewable energy is solar energy. Solar energy uses energy from sunlight to create energy for our home.

Sunlight is a clean, renewable resource. There are many ways to get energy from sunlight, such as the photovoltaic (PV) panels, converting sunlight into electricity and solar electricity, using the sun’s heat to produce electricity. Solar cells, or the photovoltaic panels, convert sunlight directly into electricity. We can often find solar cells in calculators and watches. Since solar cells are made up of semiconducting materials, materials whose conductivity will increase with temperature, sunlight will lose their electrons, allowing the electrons to flow through semiconducting materials to produce electricity when sunlight is absorbed.

Parabolic-trough concentrates the sunlight through mirrors. The mirror will be tilted towards the sun, heating the oil that is flowing in the pipe inside the panel. Heated oil will then be used to boil water to produce electricity. The dish/engine is a dish-shaped mirror that will collect heat from sunlight and transfer it to the fluid within the engine. The heat would cause the fluid to expand and produce mechanical power. A power tower system uses a large field of mirrors to concentrate sunlight onto the top of a tower. This heat will melt salt that flows through the receiver and the salt’s heat will be used to generate electricity through a conventional steam generator. With different kinds of solar panel, the price varies in the range from $5,000 to $30,000, depending on the effectiveness and the amount of energy you use. Even though the solar panels are expensive, many people still use them since they think that solar energy is energy-efficient and green.

One of the advantages solar energy has is being renewable. As long as there are living things on this planet, there will always be solar energy since we get solar energy from sunlight. Even though sunlight is not present at night, the solar energy could still be stored by charging the batteries during the day and be used at night. We could then get more sunlight on the next day. Moreover, solar energy creates absolutely no pollution or noise, unlike other machines. It doesn’t damage the environment by emitting greenhouse gases or polluting water, air or land. By using this source of energy, the air will be cleaner and it helps stop the global warming. Other than this, in the long term, the solar energy is much cheaper than the energy resources we are using now. Even though it is expensive, initially the maintenance requirement is very small and the service life is around 30 years.

The main disadvantage of solar energy is that it is extremely expensive. This is mostly why nowadays, not many people use solar energy. The price is unaffordable. Furthermore, since our world is polluted, the rain or the clouds could block sunlight from getting to the panels, making it ineffective. With a cloudy climate, the panels will be able to produce sunlight at a slower rate and may require more panels to generate enough electricity for your house, which will require more money. Even though using solar energy in houses might not require huge amount of area, big buildings do. To use the solar panels to their maximum ability, they need to be in the sun. With bigger buildings, you will need many more panels and to get them to work to their maximum ability, you will need a huge amount of area for the panels to be in the sunlight.

Even though solar energy has some disadvantages, the advantages still overweight the disadvantages since energies are running out and this solar energy is everywhere. If we can get all of the energy that was sent to this planet, we could light the entire planet for one year within an hour. But the problem with this is we can’t. If we can find a way to harvest this energy, we can have as much electricity as we want until the end of the human generation. Right now, there are many renewable energies that scientists have found but they are not yet the best way to solve the energy crisis. Therefore, scientists are still searching for new forms of energy. Dark energy is another form of energy that is very useful to mankind. In the universe, it is composed of up to 74% dark energy. What is dark energy? Dark energy is the unexplained force that causes the acceleration of the expansion of the universe.

Even though there is no evidence that the dark energy does exist, people agree that it does since they believe that the universe had a beginning, and is expanding. Other than dark energy, the underwater pressure can be another useful energy resource. Beneath the water surface, there is a potential constant source of unused hydroelectric power in the form of deep water pressure. According to Rick Dickson, he had invented a way to harvest this deep water pressure by transferring its pressure to air and then to a piston. The name of this process is called “Ocean Pressure Electric Conversion”. Therefore, as we know, the dark energy and the hydroelectric power are very powerful; if we could get dark energy by using a similar way to the way we get solar energy and harvest the water pressure, I’m positive that we would never run out of energy again. 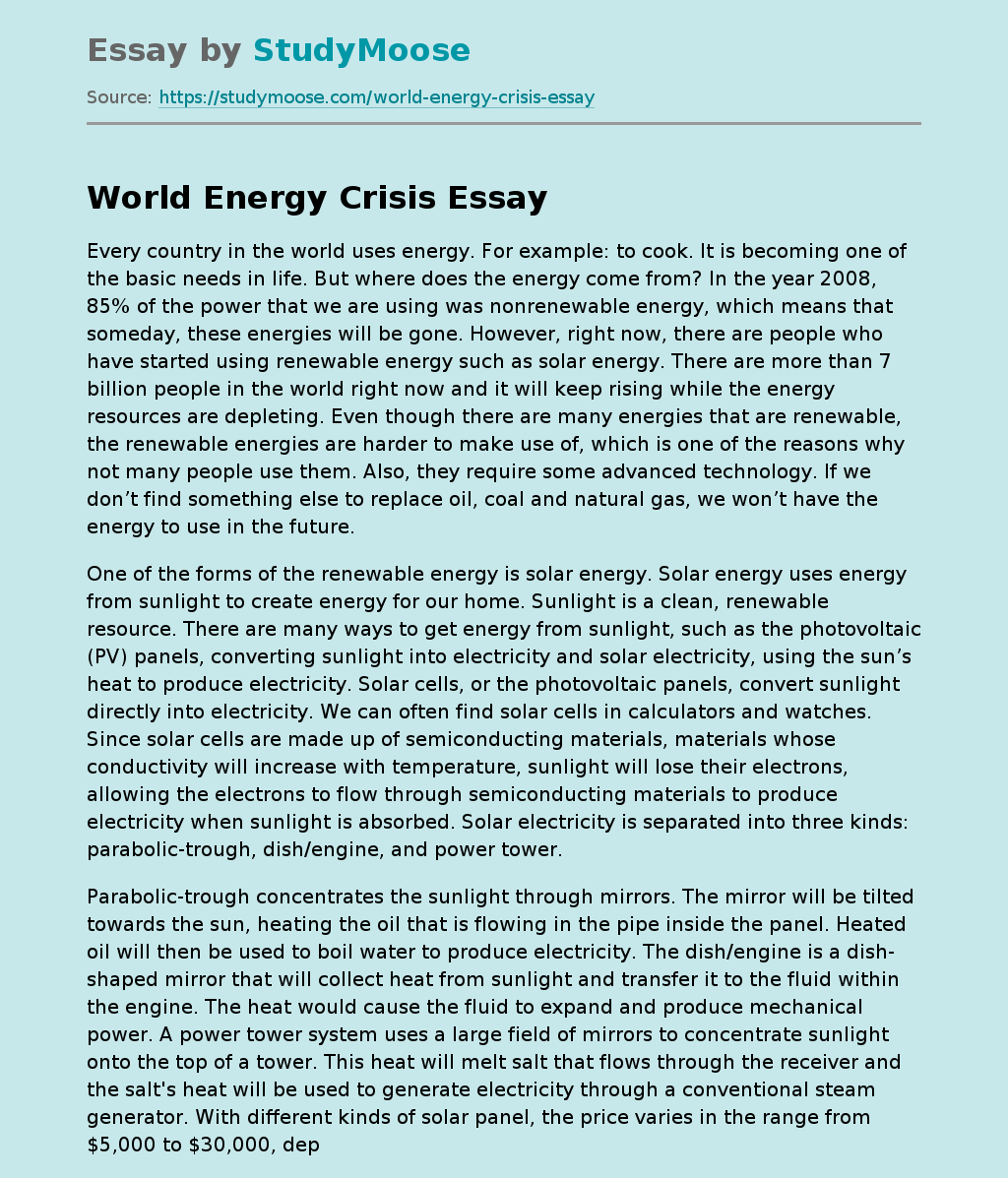