Advantages and Disadvantages of Solar Energy

In today’s world, pp seem worried about alternative energy demands in the future when we run out of oil. In addition the oil prices seem to fluctuate everyday due to world’s circumtances. Therefore,scientists are searching for another energy that is more economical and solar energy is an answer. It’s a inexpensive,renewable and pollution free and eco-friendly to solar energy, but pp can’t deny the initial costly price, unavailable at night and influence of environment. One of the most advantages of solar power is that It’s a renewable energy source.

Turn in your highest-quality paper
Get a qualified writer to help you with
“ Advantages and Disadvantages of Solar Energy ”
Get high-quality paper
NEW! AI matching with writer

The sunlight is permanet so pp take advagtages of using solar enrgy over centuries in many traditional technologies day to day like Heating, electricity, transportation, and other innumerable important photochemical processes. Second,like other modern technologies it do not cost as money. Almost all the new technologies Science in the modern era are not cost much even they may be great convenience to us. Therefore,any one irrespective of their financial strength or weakness can afford solar energy.

Furthermore, Solar energy is efficient as well as it is pollution free .

Solar energy does not need fuel, thus it’s impossible to pollute the environment by burning fuel. Solar energy is clean, sustainable and doesn’t let out carbon dioxide, sulphur dioxide or other harmful gases. So, it doesn’t contribute to global warming, acid rain or smog.. Solar power have some convenience like renewable, inexpensive and non pullution. But every coins have two sides, pp should think of few inconveniences of this natural source.

The initial cost is very high. Means the installing costs can get costly, usually due to the high-cost semiconductor materials, which are used to build a solar energy system.

Naturally as energy shortages are becoming common day-by-day, solar energy is thus becoming more price-competitive. One more disadvantages is that Solar electricity and heat are not available at night and also may not be accessible in case of bad weather conditions. So, a solar or complementary power station is required which maybe a problem for many locations. Besides the solar energy can also be influenced by the presence of water vapor, pollution etc. in the air, which may cause complexities. All in all, solar energy is a very useful natural source of energy, which may be the answer to the future for power, or energy needs.

But there are a few disadvantages, which should be kept in mind as well. But one thing for sure, Solar energy is may be one of the oldest and one of the most effective energy sources which if used carefully, can help us emphatically. A Considerable amount of energy is lost when DC (direct current) has to be converted to AC (alternating current). The solar cells can only produce DC, thus the conversion by help of Grid-Tie Inverters incurs a loss of about 4-12%. . Solar panels require a large area for installation in order to achieve a good level of efficiency.. Hence, we can all contribute to the environment by using solar energy thus erasing or trimming down various gas emissions, which can endanger earth, in turn, the millions of people in it. Solar Energy is a natural, permanent, continuous, renewable source of energy. Being the inexpensive, easily available source, it has tremendous potential that can be used for the welfare of mankind. But every coin has two sides… In today’s world, Global Warming is becoming a serious issue slowly but steadily. Thus seeking for a .

The first most natural source that comes in our mind if we just look up during the daytime…!!! Obviously, we are talking about solar energy. It uses solar emission emitted by our sun, which is the storehouse of all universal energy. It’s a renewable energy source that has been used over centuries in many traditional technologies. Solar energy can be used in a number of technologies and day-to-day usages like Heat (hot water, cooking etc. ), electricity, transportation, and other innumerable important photochemical processes, which are totally reliant on solar energy.

The scope of solar energy is immense; it can even be used to good effect in homes. But like all great things the nature has ever seen, there are two sides of the coin. Here, as well solar energy being as useful and beneficial to mankind has some cons to. Lets discuss it in “light” of the topic! …. Pros of Solar Energy Solar energy like other modern technologies do not cost as money. Almost all the new technologies Science threw up in the modern era are not cost much even they may be great convenience to us.

But any one irrespective of their financial strength or weakness can afford solar energy, having no monetary attachments. Since, the energy coming to the earth is much more than that consumed by us, the solar electrical power generation has the highest power density among all the renewable energy sources. The modern technological may be wonder to few but they are also very much involved in developing a large chunk of the pollution in our earth, which harms us in the long run. Solar energy is efficient here as well as it is pollution free and eco-friendly.

Solar energy does not need fuel, thus saving us money as well as the possibility of polluting the environment by burning fuel. Solar energy is clean, sustainable and doesn’t let out carbon dioxide, sulphur dioxide or other harmful gases which usually electric generation does. So, it doesn’t contribute to global warming, acid rain or smog. Being eco-friendly, it also helps to decrease the harmful emission of the Green House gases. There are no incurring costs, once the initial costing is taken care of, it is virtually maintenance free.

And its easily expandable as well as most solar panels can be added required for a family or any machine. Since solar energy can work entirely independently, it does not require any connections or anything, so it can be used effectively and easily anywhere. Systems can be set up anywhere, in remote locations as well. So, those locations can rely on solar energy even if the modern technologies don’t reach out to them. So, its very pragmatic & cost-effective for a new site. Solar energy bolsters local jobs and wealth establishments. Thus it helps to fuel economies as well.

Advantages and Disadvantages of Solar Energy. (2016, Oct 28). Retrieved from https://studymoose.com/advantages-and-disadvantages-of-solar-energy-essay 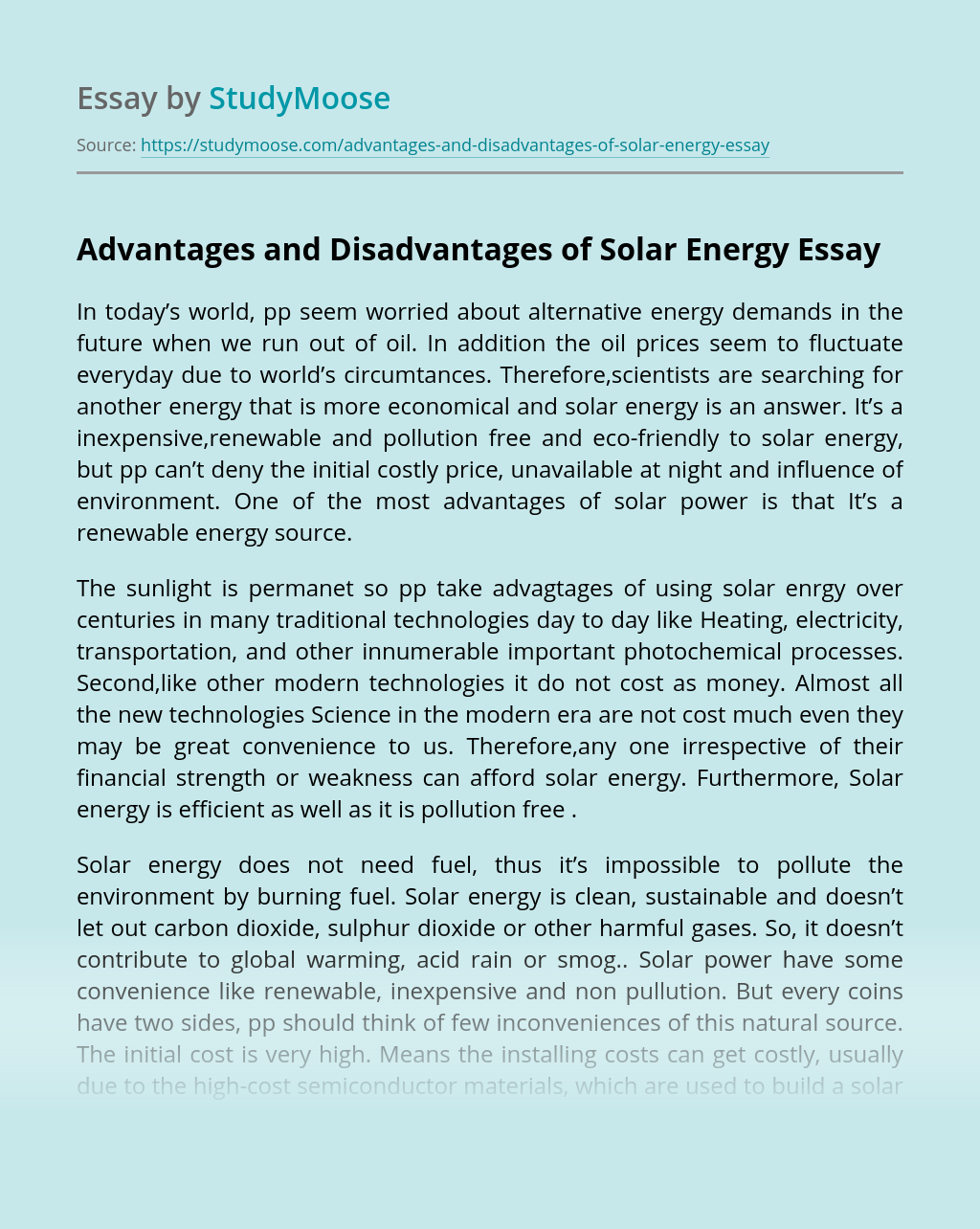 Turn in your highest-quality paper
Get a qualified writer to help you with
“ Advantages and Disadvantages of Solar Energy ”
Get high-quality paper
Helping students since 2015
Stay Safe, Stay Original