One of the most debated issues in today’s world is that of energy sources to power an increasing global demand. Traditionally, humans have converted energy from natural resources like coal and natural gas for use. However, these sources of energy are both nonrenewable and cause large amounts of pollution. As we progress through the 21st century, renewable energy sources like solar and wind energy will see increased use to replace traditional sources. One of these sources, wind energy, is seeing a rise in development because it is a source of renewable energy that is both sustainable and poses minimal costs to the environment.

Don't use plagiarized sources. Get your custom essay on
“ Wind Renewable Energy ”
Get custom paper
NEW! smart matching with writer

Wind power has been around for many centuries, and has steadily developed over the last 100 years. The first major usage of wind power in the United States was between 1870-1930 when farmers used wind energy to pump water (Union of Concerned Scientists, 2009.) Modern wind turbines, although more advanced and complicated than their predecessors, operate in the same manner.

Air particles moving in the form of wind create kinetic energy, which is captured by the turbines (Layton, 2011.) The wind hits the blades of each turbine, which due to their unevenness in size, begin to spin around the center of a turbine.

The turbine is instructed to face the direction of the wind source at all times by a small computer located at its center, which interprets weather data (U.S. Dept. of Energy, 2011.) The blades, connected to a shaft inside the turbine, begin to spin the shaft, which in turn shifts various gears at high speed revolutions, generating the electricity.

Most wind turbines are very tall in order to capture greater wind speed.

Wind power is measured in GW, and it’s production of electricity in GWh. The conversion of wind energy into wind power follows the 1st Law of Thermodynamics, as energy is neither created nor destroyed in this process. Kinetic energy from the wind source is simply converted to electricity via the operation of the turbine. The 2nd Law of Thermodynamics shows that energy will move from a more concentrated state to a state of greater entropy. In the case of wind turbines, wind energy is transferred from a concentrated state to the system, and converted to electricity. An example of a wind turbine farm in America is the Fowler Ridge Wind Farm, located near Lafayette, IN, which currently consists of over 300 turbines and has a capacity of approximately 600 MW. The project is still developing to become even larger.

Wind turbines are becoming increasingly popular because not only is wind energy inexhaustible, but also energy derived from wind power has few negative environmental effects. Unlike fossil fuel energy systems, minimal pollution is emitted from the transfer of wind energy, and the primary complaint with turbine farms is that they are large and unattractive, and may present a confusing problem for migrating birds. Wind power is also economical, averaging a cost of only 4 cents/kWh in 2008 (Union, 2009.) In 2008, the United States saw wind power reach upwards of 25,000 MW, enough to power over 6 million homes in the country. Globally, over 120,000 MW of wind energy were delivered in 2008 (Union, 2009.)

Growing concerns over the environment’s health and the prices/exhaustion of nonrenewable energy sources will lead to an increase in wind power in the future. It has been projected that by 2013, global wind power capacity will reach nearly 332 GW – nearly triple its current size (Union, 2009.) Overall, wind power is a rapidly developing source of renewable energy that is viable because it is both sustainable and poses few environmental costs. 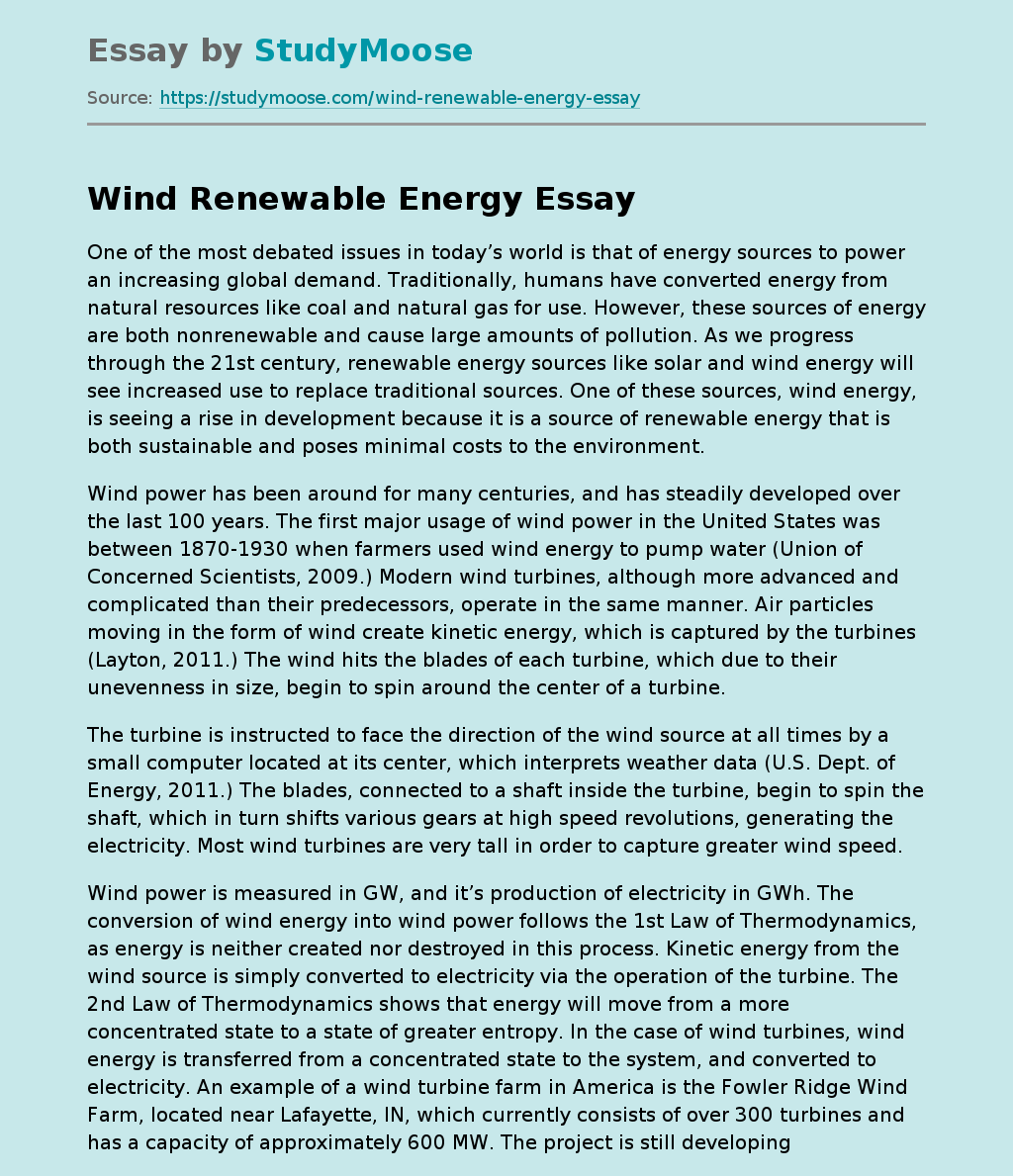