Electricity is the most important resource we use. Can you imagine a time in the future where you cannot turn on a switch to light your home, or turn on the gas to light your stove? Believe it or not if something is not done to create sustainable energy sources this will happen. The challenge we face is to create sustainable energy that is both environmentally friendly and cost effective. Coal, oil and natural gas is commonly referred to as fossil fuels.
Don't use plagiarized sources. Get your custom essay on
“ Energy Sustainability ”
Get custom paper
NEW! smart matching with writer

Fossil fuels were created from the fossilized remains of plants and animals that have been exposed to heat and pressure within the earth’s crust for millions of years.

These non-renewable resources are quickly becoming depleted due to increasing industrial use, population growth and urban development. Scientist continue to argue about the amount of fossil fuels that remain but the most dire predictions show us running out of fossil fuels by 2025 (cite) and the conservative guess is 2050 (cite). Compared with non renewable energy sources, renewable energy sources have impressive long-term potential.

Fossil fuels are not only limited but they also raise many environmental concerns. Our dependence on fossil fuels leads to serious air pollution and global warming.

The mining for coal or drilling for oil destroys an untold number of ecosystems. However, renewable energy offers clean sources that are much friendlier to the environment. Another advantage for developing nations using renewable energy is to help local economic development. Regions that still require fossil fuels to provide electricity and heating may spend a great deal of money on imported fuels.

Therefore, renewable energy shows a lot of potential for future energy supplies. When fossil fuels disappear we will send ourselves back in time to a period before the industrial revolution.

Without fossil fuels there will be no supermarkets, malls or jobs to go to everyday. Everyone will be fighting over the small portion of vacant undeveloped land to farm and raise animals for food. Running water will no longer come out of pipes and the sewer systems will cease to run. Larger cities will cease to be inhabitable due to disease and lack of available land for farming. Highways once heavy with traffic will be still with abandoned vehicles. Will it take the human species to reach this point before we suddenly realize why it was so important to save the planet? This very different life is inevitable unless we do something now.

The power the sun continuously delivers to the earth dwarfs every other available power source. Though it is generally accepted that solar power might have the best potential in the future of energy supply, it is important to bear in mind that for some countries, this may call for high technology and expenditure which they cannot afford. Great efforts have been made to reduce the cost of solar thermal plants (Middleton, 2003), however, solar cells are still relatively expensive, and this results in limitation of wider use, especially in the developing world (Seitz, 2002).

Solar energy has already shown its promise with a massive resource and few adverse environmental impacts (Aringhoff et al, 2005). The few arguments against solar power are over concern of inconsistent amounts of sunlight arriving at the earth. The unpredictable amount of sunlight makes the successful collection of energy a rather difficult process. The use of solar energy also has great dependence on location, time, and weather conditions. Solar energy has the largest potential in the desert regions of the world including the Middle East and the South Western portion of the United States.

Harnessing the wind and using it to create energy is considered to have great potential as a renewable energy source. However, one crucial part of establishing a wind power system is high technology, which is now the main defect in the developing world. Even in some developed countries there is such a noticeable lack of engineers in the wind industry. Contributions made by wind energy seem mainly to be the reduction of environmental impacts. Therefore, the use of wind power can furnish a large amount of energy without polluting the environment.

The benefits of wind power are easy to see but some say the detractors are too great. In order to create this energy large areas in wind rich areas are needed in order to build wind farms. The complaints run to the noise the turbines make, the esthetic appearance and the effects the windmills and turbines have on the local wildlife. (Middleton, 2003). Similar evidence can be found to support this view by Volker (2005) and Wind power and the environment- benefits and challenges (2006, p31-33). Geothermal energy is another source of renewable energy. While this source is less widely discussed the either solar or wind energy.

Geothermal energy uses the heat from the earth’s core to create energy it is both cost efficient and environmentally friendly. The detractors to geothermal energy claim that there are not enough areas available that give the right access to create a geothermal plant. Geothermal could be a valuable resource in the future once more through research has been completed. Geothermal also might work in certain areas where there are inactive volcanoes. Tidal energy is another renewable energy source. This renewable energy will use the force of the oceans tides to create energy.

This is also a developing resource and the technology is still new and expensive. Also, detractors of this advise tidal energy plants will disrupt and due irreparable harm to the tidal ecosystem. In order to avert disaster we need begin to implement a national plan that will lead us away from the use of the dwindling supplies of fossil fuels and towards clean renewable energy sources. Once we consider the options discussed above I feel the best alternatives to non renewable energy will be a combination of wind and solar energy. In the plan I laid out below I show a 50 year plan to move us towards sustainability.

The first step towards implementing renewable energy will be to study the amount of sunshine available per day at various points across the United States. At the same time we will also track wind speed and length of time the wind blows each day. This will allow us to track the areas with the most sunshine and the best wind conditions. This study will continue for two years. After the two year study is complete a group of scientist will compile the data and create a map of the United States marked with zones showing the best areas to build either wind energy or solar energy plants.

Once these maps are created we will hold a conference at a central location and mandate every energy company in the United States send a representative. Any company who fails to send a representative will be fined $250,000. At this conference we will present the maps to the representatives and ask them to express any ideas, questions or concerns of implementing renewable energy into their current energy matrix. After we discuss the two year study and the map we will then explain the new legislation. The new legislation will require the energy companies to build and implement renewable energy resources based on the two year study.

These new energy plants will be funded by special loans provided by the government. These loans will fund construction of the new power plants with a fifty year payment plan with a ten year delay on payments. The legislation will also include a new federal law that states that any company providing electrical power to consumers must provide a minimum of 30% of its power from renewable sources by the year 2025. Those who do not comply with the new law will be fined $1,000,000 and given three years to comply.

Failure to comply after 3 years will result in the seizure of the company by the government and the company would then be sold at auction. Beginning in 2030 we will begin increasing the amount of required power provided by renewable sources by 5% every five years. This 5% increase will stop in 2060 when the required percentage reaches 60%. In 2061 we will begin a new two year study that will research the effectiveness of our first step towards clean energy and determine whether or not we could achieve totally independence from non renewable energy.

This sustainability plan does not end the use of fossil fuels but lessens their usage at a rate that energy companies can keep up. The laws will be strict and the penalties tough as I feel that the only way to reach corporate America is through their pocket books. This sustainability plan requires the assistance and power of the United States Government. It will also require the support of the energy companies and consumers. Hopefully other countries will see how successful we have been in the change from the use of non renewable energy to renewable resources.

The worldwide demand for energy will rise dramatically as population’s increase, which will lead to more industrialization and urbanization. Without the creation of a sustainable energy source and the implementation of a plan to lead us away from the usage of fossil fuels we will end up in the dark. We need to look for away to light the future with resources that will not run out and not cause environmental harm. I challenge everyone to write to their energy company and to their local congressman and ask them to use renewable energy sources. 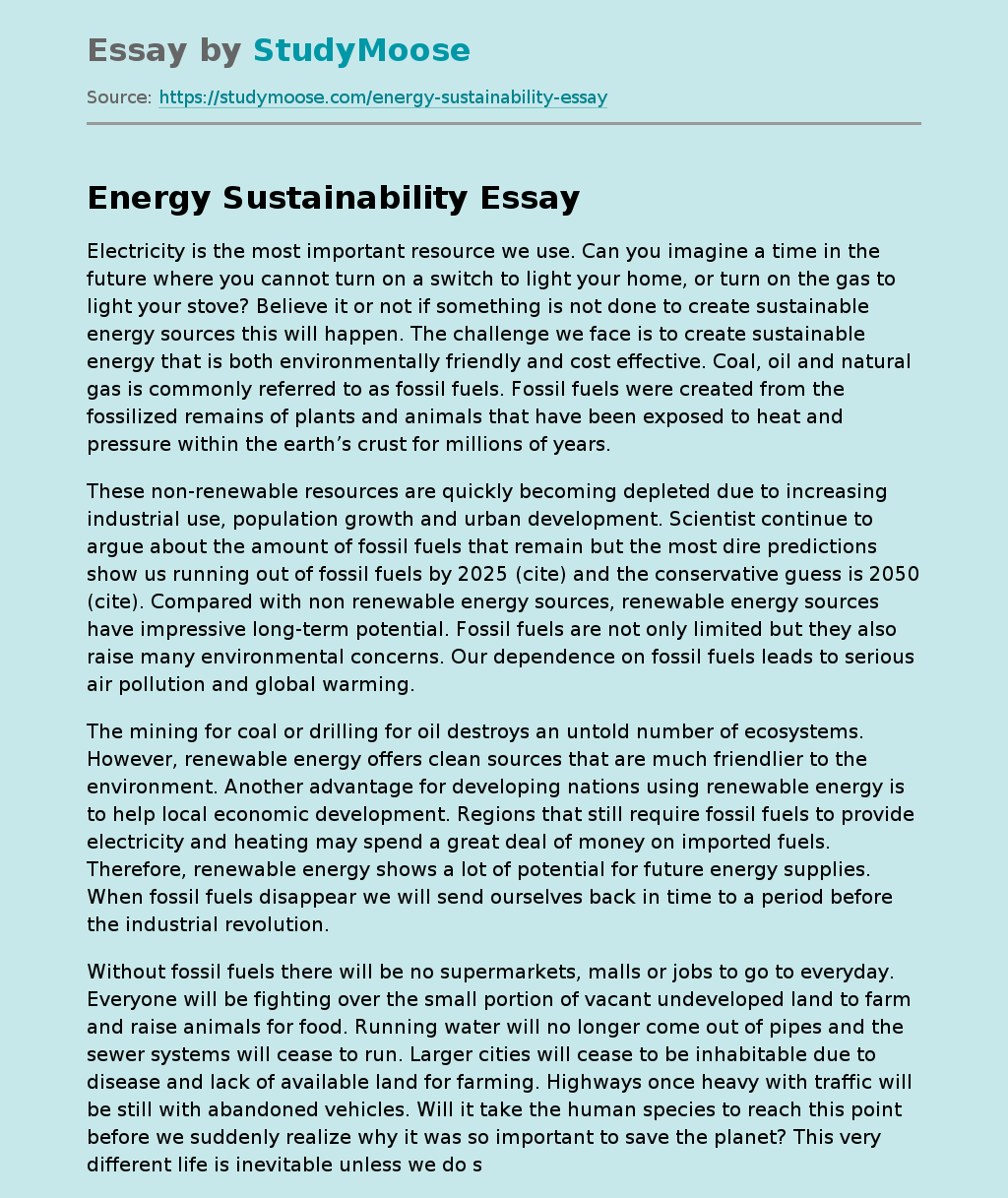