Long time ago, ancient mariners used sails to capture the wind and explore the world. Farmers once used windmills to grind their grains and pump water. Today, more and more people are using wind turbines to wring electricity from the breeze. Over the past decade, wind turbine use has increased at more than 25 percent a year. Still, it only provides a small fraction of the world’s energy. Therefore, wind power or wind energy is the energy extracted from wind using wind turbines to produce electrical power, windmills for mechanical power, windpumps for water pumping, or sails to propel ships.

Don't use plagiarized sources. Get your custom essay on
“ Wind energy essay ”
Get custom paper
NEW! smart matching with writer

Even though wind energy is being used worldwide lately, there are some pros and cons relates to this type of energy. Wind energy is known as a free, renewable resource, so no matter how much is used today, there will still be the same supply in the future. It is also a source of clean, non-polluting, electricity. Unlike conventional power plants, wind plants emit no air pollutants or greenhouse gases.

According to the U.S. Department of Energy, in 1990, California’s wind power plants offset the emission of more than 2.5 billion pounds of carbon dioxide, and 15 million pounds of other pollutants that would have otherwise been produced.

It would take a forest of 90 million to 175 million trees to provide the same air quality. The creation of wind energy is “clean”. Unlike the use of coal or oil, generating energy from the wind does not produce pollutants or require any harmful chemicals.

Moreover, Wind is free. If you live in a geographical location that receives plenty of wind, it is there for the taking. As a renewable resource, wind can never be depleted like other natural, non-renewable resources.

The benefits of using wind energy is still going. For examples, the electric company may end up owing you if you generate more electricity than you need from wind power; it can be fed back into the grid and you’ll receive credit. Besides, The cost of producing wind energy has dropped significantly in recent years, and as it gains popularity, it will continue to become more affordable. You will recoup the cost of purchasing and installing your wind turbine over a relatively short period of time. In fact, wind turbines can provide energy for many homes. You do not necessarily have to own a wind turbine in order to reap the benefits; you can purchase your electricity from a utility company that harnesses wind energy.

Tax incentives are offered for installing wind turbines on the federal and state levels. As for agriculture, land owners who rent land to wind farms can make quite a bit of extra money, and wind energy also creates new jobs in this growing technology field. Wind turbines are considered by some to be beautiful. The modern versions look nothing like pastoral Dutch windmills, but they are white, sleek and modern. Wind energy also reduces our dependence on fossil fuels from foreign countries.

Despite all the benefits we have from the wind energy, it does come with some disadvantages. Wind does not always blow consistently, and turbines typically operate at only 30 percent capacity. If the weather is not in your favor, you may end up without electricity. Severe storms or extremely high winds might cause damage to your wind turbine, especially when they are struck by lightning. Moreover, the blades of wind turbines can sometimes be dangerous to wildlife, particularly birds and bats. Although wind power plants have relatively little impact on the environment compared to fossil fuel power plants, there is some concern over the noise produced by the rotor blades, and birds and bats having been killed by flying into the rotors. Most of these problems have been resolved or greatly reduced through technological development or by properly sitting wind plants. Wind turbines create a sound that averages around 60 decibels, and if you don’t have enough space to locate it away from your house it may prove to be a nuisance. Some people believe that wind turbines are unattractive, so your neighbors may complain.

Compliance with city codes and ordinances may be bothersome when you are trying to install a wind turbine. In some cases, height restrictions may prevent you from installing one. Wind turbines and other equipment required to create wind energy can be very expensive up front, and depending on where you live, it may be difficult to find a vendor and someone who can maintain the equipment. It requires a lot of open land to set up wind turbines, and cutting down trees sort of defeats the green purpose. Desirable areas to install them are often located far from dense urban areas that could benefit the most from their power. Wind turbines may interfere with reception for televisions or other equipment.

Wind energy is a green energy source. Harnessing wind energy does not pollute the environment nearly as much as fossil fuels, coal and nuclear power do. It is true that the manufacturing, transportation and installation of a wind turbine contributes to global warming slightly, but the electricity production itself does not involve any emissions of climate gases whatsoever. The potential of wind power is absolutely incredible. Several independent research teams have reached the same conclusions: The worldwide potential of wind power is more than 400 TW. Harnessing wind energy can be done almost anywhere. Whether or not a resource is financially feasible is another question.

Even though the wind does not blow all the time, we still can provide capacity value for utilities. The studies, by the Tellus Institute of Boston, Mass., and the Prince Edward Island (Canada) Energy Corp., concluded that when wind turbines are added to a utility system, they increase the overall statistical probability that the system will be able to meet demand requirements. They noted that while wind is an intermittent resource, conventional generating systems also experience periodic outages for maintenance and repair. The exact amount of capacity value that a given wind project provides depends on a number of factors, including average wind speeds at the site and the match between wind patterns and utility load requirements. According to the U.S.

Department of Energy, the world’s winds could theoretically supply the equivalent of 5,800 quadrillion BTUs (quads) of energy each year–more than 15 times current world energy demand. (A quad is equal to about 172 million barrels of oil or 45 million tons of coal.) A recent study performed by Denmark’s BTM Consult for the European Wind Energy Association and Greenpeace found that by the year 2017, wind could provide 10% of world electricity supplies, meeting the needs of 500 million average European households. The potential of wind to improve the quality of life in the world’s developing countries, where more than two billion people live with no electricity or prospect of utility service in the foreseeable future, is vast.

Nevertheless, the wind energy industry is booming. Globally, generation more than quadrupled between 2000 and 2006. At the end of last year, global capacity was more than 70,000 megawatts. In the energy-hungry United States, a single megawatt is enough electricity to power about 250 homes. Germany has the most installed wind energy capacity, followed by Spain, the United States, India, and Denmark. Development is also fast growing in France and China. Although wind power only accounts for about 2.5% of total worldwide electricity production, the capacity is growing at an incredible rate of 25% per year (2010).This does not only contribute in the fight against global warming, but also helps lowering costs. Industry experts predict that if this pace of growth continues, by 2050 the answer to one third of the world’s electricity needs will be found blowing in the wind.

Wind energy is a renewable source of energy. Wind is naturally occurring and there is no way we can empty the energy resources. Wind energy actually originates from the nuclear fusion processes that take place on the sun. As long as the sun keeps shining, we will be able to harness wind energy on earth. There is no one size fits all, perfect solution to creating energy without causing damage to the environment. Wind energy has many benefits, but its downside prevents some people from taking advantage of this plentiful natural resource. It may not be the answer to the world’s electrical needs, but combined with other renewable energy resources, it can help us cut our dependence on coal and oil. Before you install a wind turbine, carefully weigh all the pros and cons of wind energy before deciding if it’s right for you. 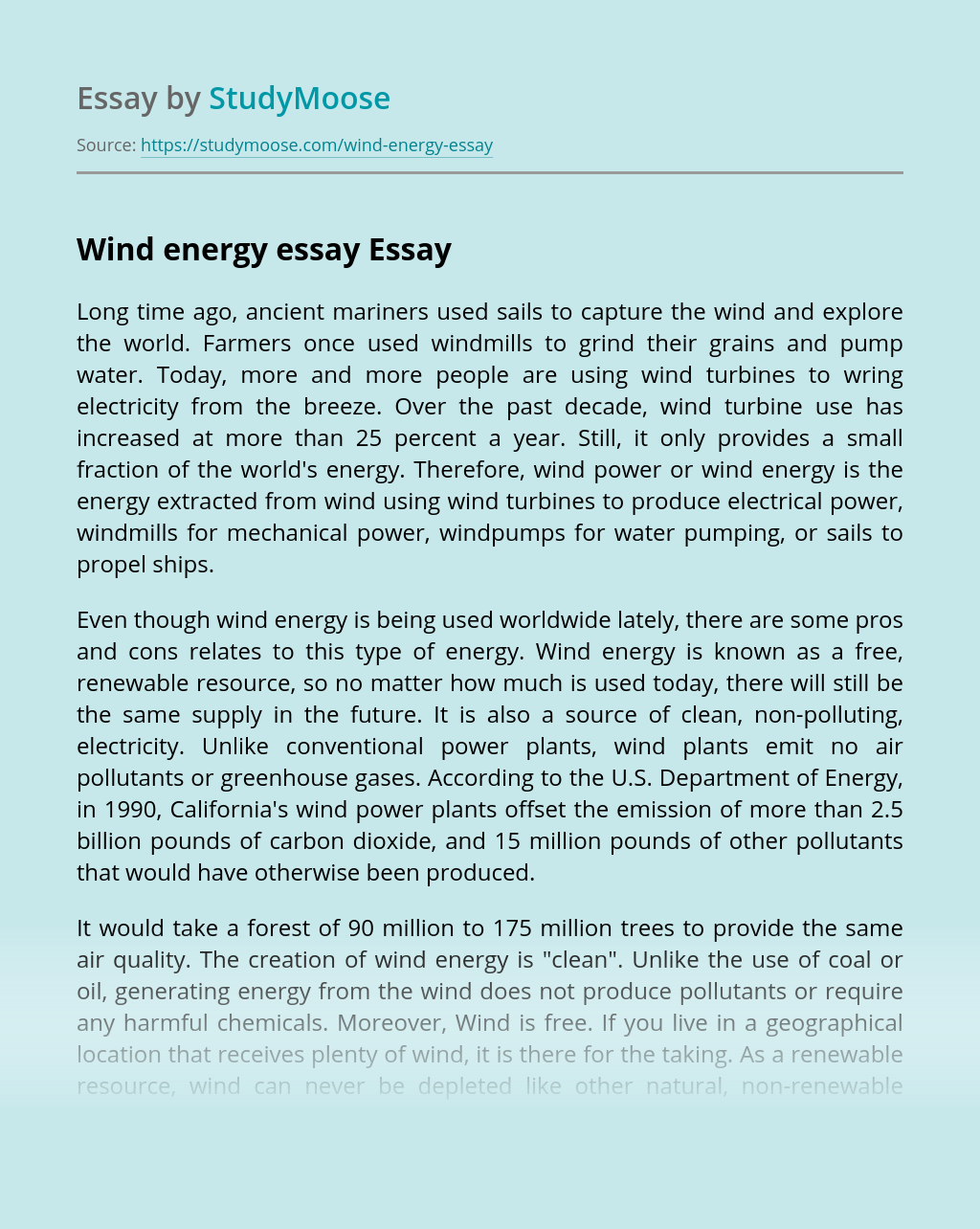