Imagery in Ode to the West Wind by P.B.Shelley

Ode to the West Wind is a poem by Percy Bysshe Shelley that shows the correspondence between the inner and the outer world of the poet. It is among his famous poems. The major theme of the poem is the poet’s intention to become a force that may bring the change and rejuvenation in man’s life. This theme is metaphorically shown by the rejuvenation of nature through the west wind as an agent. It is described through his excellent use of imagery in it.

Don't use plagiarized sources. Get your custom essay on
“ Imagery in Ode to the West Wind by P.B.Shelley ”
Get custom paper
NEW! smart matching with writer

One may examine the excellence in the usage of imagery through the way it progresses from the beginning till the end.The poem commences with the imagery of the earth, shifting its attention to the air, then moving towards the water, and finally ending at the fire. Thus, the west wind affects all the four elements of the universe: earth, air, fire and water. All these images are conjured up in one thing-the poet-prophet figure.

Before discussing these four imageries, it is necessary, at first, to discuss the symbol of the west wind itself. The west wind symbolizes a force, may be of the God or Christ like figure or of any powerful might that could dominate even the most powerful elements-earth, air, fire, and water. The speaker wants to be both the west wind itself and the objects the west wind spreads. The poet wants himself to be that force so that he may bring some revolution among the mankind. As Shelley says:

“…Be thou, Spirit fierce,
My spirit! Be thou me, impetuous one!”
Also, the way in which the west wind carries leaves, seeds, ashes and sparks, he wants himself and his thoughts to be the objects to be spread: “If I were a dead leaf thou mightest bear;
If I were a swift cloud to fly with thee;
A wave to pant beneath thy power, and share
The impulse of thy strength, only less free
Than thou, O uncontrollable!”
This unique technique of the structure of the imagery used makes the poem Shelley’s masterpiece.

At first, there comes the imagery of the earth. The earth is mostly associated with the femininity-fertility, rebirth, and stability. The juxtaposing of west wind blowing over the entire earth represents the speaker’s desire to recreate and scatter his words. The major imageries related to this theme are the ‘dead leaves’ and the ‘winged seeds’. Both the dead leaves and the winged seeds together show the cyclicality of life on earth. At the outset, the power of the west wind stirs the earth by blowing its leaves. They are shown to scatter in such a way as if they are escaping from an enchanter ‘like ghosts’.

This symbolizes the speaker’s inability to control his emotions that carry his message of reform and revolution. Further, the leaves are not the simple leaves but the ‘dead leaves’ with different colors like “Yellow, and black, and pale, and hectic red”. This is a visual imagery to arouse the sensual expression of these emotions in the reader. The poet’s thoughts are like the leaves with different ideologies, beliefs and, ideas. The leaves are shown dead because the poet’s thoughts have become dead due to his growing age. By showing this imagery the poet wants to say that his thoughts too have become pale and dead and need some force that may derive them like the leaves.

After that this imagery of leaves evolves to the imagery of seeds the ‘winged seeds’. Since his thoughts have become pale and hectic red due to the growing age, he wants the rebirth of his emotions just like the winged seeds. West wind plants seeds in the ground during autumn and when the spring comes the buds grow out of them. They are buried like a corpse in the grave. His thoughts have become the corpse. Now it is the time of their fertility. Thus, we may note Shelley’s skill in showing the birth, life, and decay of his thoughts like the leaves that now need the rebirth like seeds.

The poem then progresses to the imagery of second element, the air. The air is the source of communication because it carries thoughts far away. The wind shows its power over the air, too. Due to the west wind the air becomes more powerful which shakes the clouds. As a result rain and lightening is produced. They are the symbol of inspiration and creativity. Even as they destroy, they encourage new life and hope as well. Thus, all these details and descriptions of the imagery of air create a sensory experience of the poet’s inspiration for the creation of such a poetry that may go far beyond his reach and bring the change and revolution far and wide.

The next imagery evolves to the third element, the water. Water is associated with the ability to feel and intuition to know. He wants to be closely connected to the west wind’s power over water as well. The West Wind awakens the sea that itself is highly violent. Sea has destroyed many great civilizations with its power. But still the west wind dominates it as well. It influences the water not only at its surface level but also deep inside the sea. Like west wind’s power over the deep sea the speaker requests his thoughts to be found not superficially but deep in the hearts of people. Thus, Shelley uses water as his primary source of poetic inspiration.

Finally,the poet describes the imagery of the fourth element, the fire. The fire is usually the image of hopelessness, destruction and death. This is the reason most of the people interpret the poem as the speaker’s lamentation over his inability to directly reach people. However, it works as the preserver as well. The fire is immediate in its action thus represents action orientation. There are only three images related to the fire-hearth, ashes and sparks. Since hearth is a controllable fire, it might be the case that the poet wanted West Wind or his emotions to be controlled not fleeing ‘like ghosts’. The poet compares his thoughts to the ashes and sparks of hearth.

Shelley is able to indulge in wish-thinking without seeming to and, at the same time, he can strengthen the virtue of hope in himself. The poem ends optimistically with an image of spring lurking behind the shroud of winter: “If Winter comes, can Spring be far behind ?”

Imagery in Ode to the West Wind by P.B.Shelley. (2016, Sep 30). Retrieved from https://studymoose.com/imagery-in-ode-to-the-west-wind-by-p-b-shelley-essay 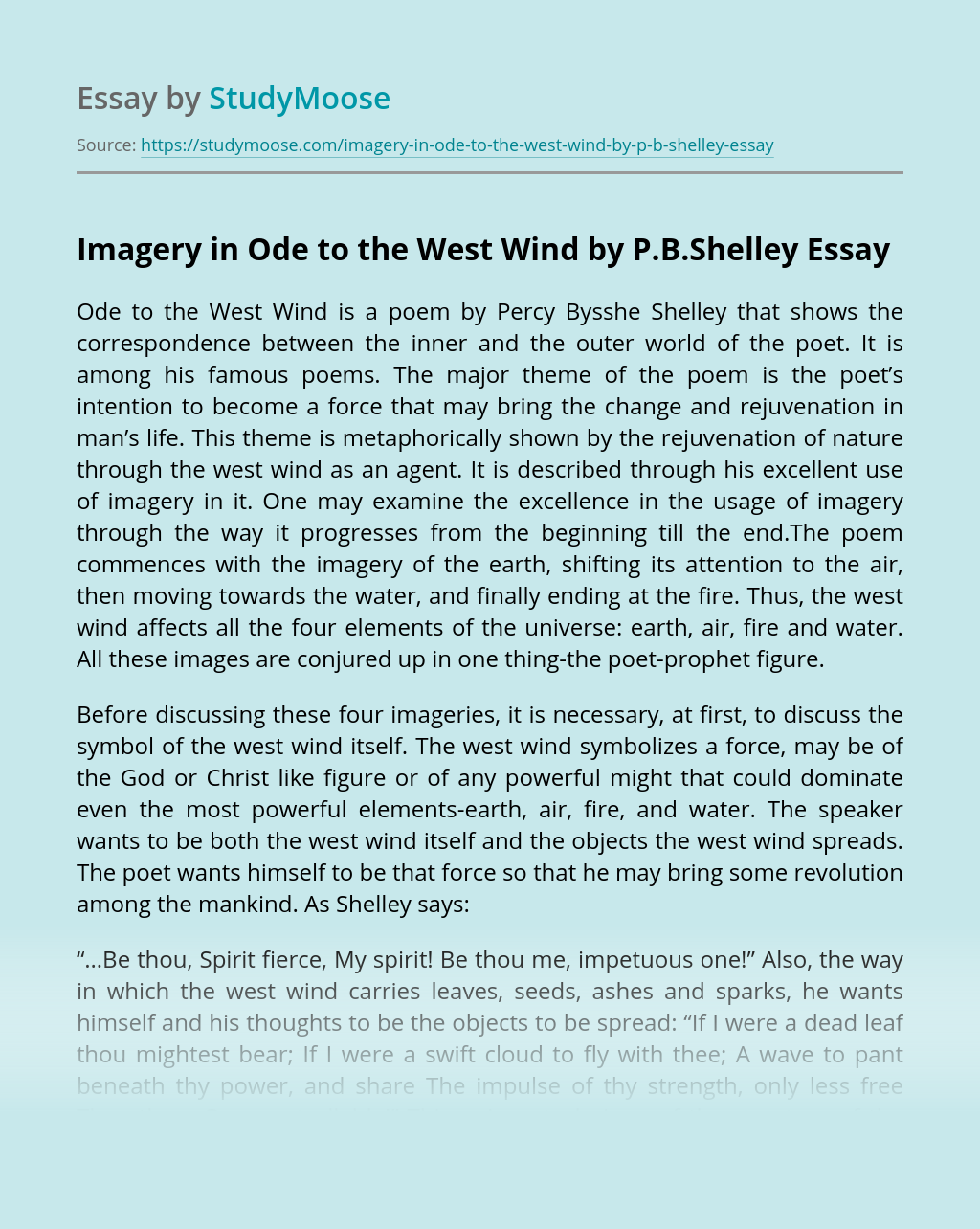