Romanticism was an intellectual movement that took hold in Europe during the late 18th century. Romanticism was born out of a direct opposition to Enlightenment views that emphasized reason, science and knowledge. The Enlightenment had evolved as a response to oppression by the church. During the Enlightenment Europeans began to question the laws of the church and state that were deemed biased and unfair. As a result to this oppression Europeans began to seek out knowledge and the philosophers of the time were seen as political thinkers and leaders.

Don't use plagiarized sources. Get your custom essay on
“ Romanticism in Frankenstein ”
Get custom paper
NEW! smart matching with writer

In contrast, Romanticism was a movement that opposed political norms that were the foundation of Enlightenment thinking. Romanticism placed emphasis on feelings, love, individuality and imagination to name a few. Romanticism touched all facets of art, literature and music during the late 1800s. Many writers during this time produced works that help to define the era of Romanticism by creating characters that were individualists with a keen sense of “self-definition and self-awareness” (Brians).

Mary Shelley is considered one of the great novelists of the Romantic period even though she is only credited with writing one novel that falls within the Romantic genre.

Mary Shelley wrote Frankenstein: or The Modern Prometheus, in 1818 as part of a writing competition held by Lord Byron in Geneva. It was originally published under an anonymous author and Shelley’s name did not appear on the novel until a second edition was released in 1823. Frankenstein was Shelley’s most famous work and it is said that the idea for the novel came to Shelley in a dream.

In her dream Shelley observes a scientist piecing together parts of man’s body, only to be horrified in the end by the unnaturalness of his creation. Frankenstein is considered the first work of science fiction and also a novel that contains ideas central to the Romanticist and Gothic movements (www.egs.edu). In Frankenstein, the main protagonist Victor Frankenstein is the embodiment of Shelley’s romanticist ideals. Victor’s ambition is to create a living, breathing being out of the innate materials in his laboratory. Victor reiterates his relenting passion for creating an artificial being by stating that no single person can “conceive the variety of feelings which bore me onwards, like a hurricane.”

This statement shows that Victor wants to surpass his human limitations to create a new life form. Victor Frankenstein is considered a romantic character because he embodies the Romantic ideals of imagination and innovation. He is a dreamer, who is obsessed with impossible standards and ideals. In this sense, he embodies Romantic traits of unrelenting ambition and is therefore seen as one of the great Romantic characters. Ironically, in Victor’s passionate pursuit of perfection he creates a monster that is the embodiment of imperfection (Shelley). Other examples of Romantic themes in the novel appear when Shelley incorporates vivid descriptions of nature.

Throughout the novel, Shelley uses lyrical language to describe the awesomeness of nature which is the backdrop of the story. Shelley’s characters recount their inner feelings and these inner feelings often mimic the state of nature around them. For example, the barren and icy descriptions of the land in which Walton forges into and where the monster ultimately retreats to emphasize the experiences of the monster who fights against the isolation he feels as a result of his monstrous form.

The barren landscape can also mirror the isolation that Walton must have felt when he foolishly travels into this cold and foreboding land in the book’s opening scenes. Another example of nature mimicking feelings is the scene in which Victor awakes with much regret after creating his monster. He reflects that the morning is “dismal and wet” and he fears encountering the creature around every bend. Shelley keeps this common theme throughout the novel so that when the protagonist is scared or upset the weather conditions parallel what Victor is feeling or thinking (Shelley).

With emphasis on nature and unrelenting passion, among many other Romantic themes in the novel, Mary Shelley allows her characters to express their deepest desires, even if those desires are seen as unattainable to the reader. These elements of descriptive nature, along with a myriad of emotions that are expressed by the characters help to solidify Frankenstein as one of the great Romantic novels of its time. 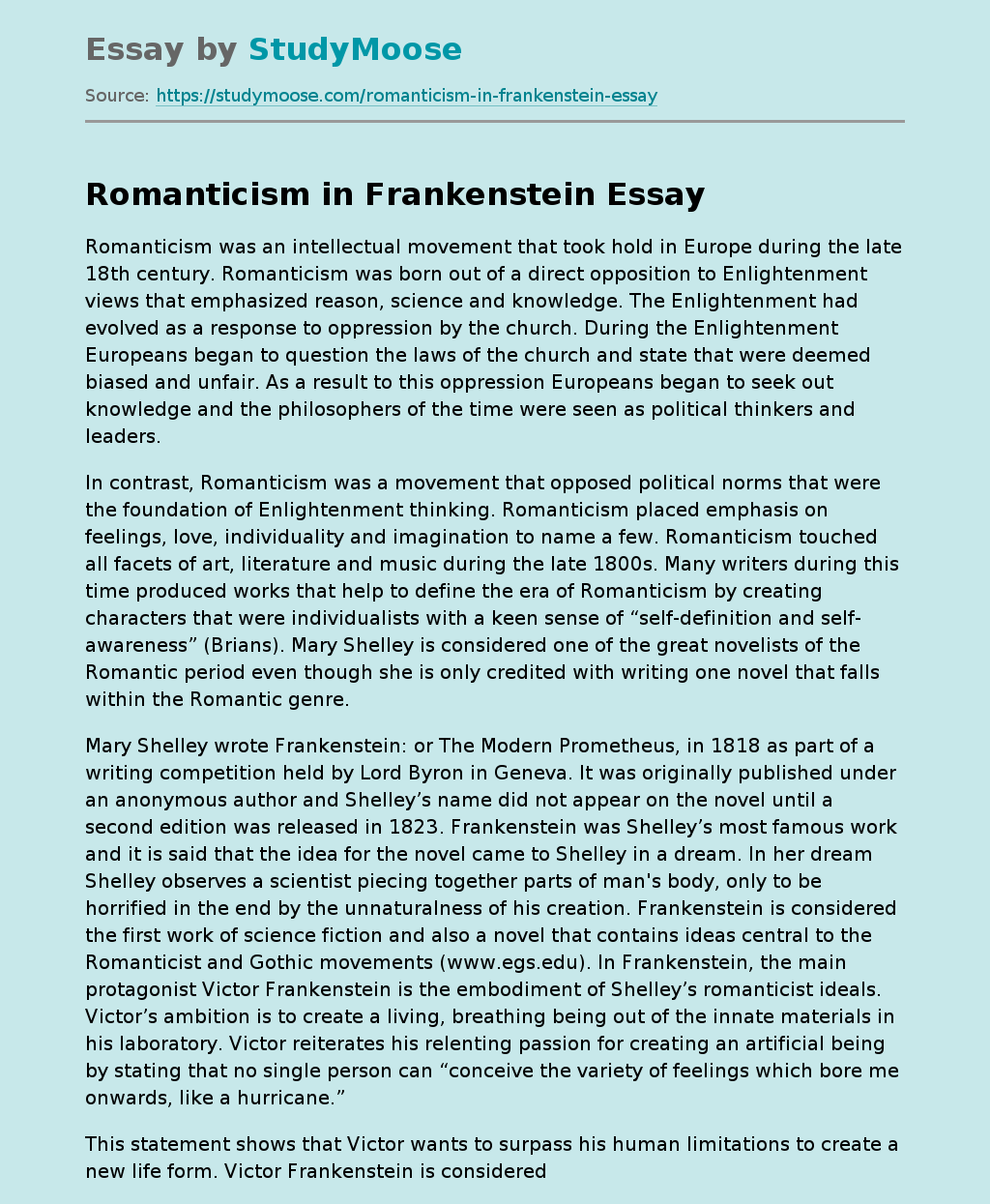