I chose the poem Ode to The West Wind by Percy Bysshe Shelley because I was attracted to the many images Shelley painted in the poem. Nature is a very interesting and powerful force and the way Shelley portrays it in this poem really caught my attention. Shelley also emphasizes the importance of words and their potential impact on a society if shared. This is a concept I found quite intriguing. In my research, I found that when Shelley wrote this poem he was visiting Italy.

Don't use plagiarized sources. Get your custom essay on
“ About The Poem “Ode to The West Wind” by Percy Bysshe Shelley ”
Get custom paper
NEW! smart matching with writer

Throughout the poem, I noticed many references to Italy such as his account of the “blue Mediterranean” and Baiae’s bay in stanza III. I also noticed a large theme surrounding the topic of death and new life. Shelley wrote this poem shortly after the death of his son. He will often use winter as a metaphor for death. In the last line of the poem he asks for new life by saying “O Wind, If Winter comes, can Spring be far behind?” He also mentions Heaven in stanzas IV and II, transforming the wind into a divine being.

When Shelley wrote this Ode he was not only grieving for his son but the lives lost in his home country of England as this was also written shortly after the Peterloo Masacre. Shelley considered himself to be a revolutionary and wanted his words to be spread and make a change. I saw this in the last stanza of the poem when Shelley describes his hopes that his words will be spread throughout the universe “Like withered leaves to quicken a new birth!”

He hints at this once again in lines 68 and 69, telling the wind to prophesize his words to “unawakened Earth”.

In the poem Ode to the West Wind, Percy Bysshe Shelley uses imagery, personification, and metaphors to describe the Wind as a fierce and powerful being who has the ability to give or take life. Shelley also has a strong desire to be like the wind so that his words will be spread throughout mankind. Shelley uses imagery in many different ways throughout this poem allowing the reader to activate his or her senses and feel the impact of the wind. When describing the leaves Shelley uses colors like yellow, red, and black to spark the strong feelings within the reader that these colors are often associated with. Yellow might make a reader think of sickness, while black is often associated with death or a dark power. Shelley shows this at the end of Stanza II when he describes the “Black rain” that will burst open the tomb of the years passed. This gives the reader an image of sheer power produced by the Wind. He also uses color to portray a more peaceful setting. In Stanza III Shelley uses blue and azure (often used to describe the blue sky) to depict a sleepy scene by the Mediterranean. Although as the Stanza progresses, Shelley uses gray to transition into a darker image.

The reader experiences the image of a beautiful, pure sky quickly being taken over by a more unpleasant, fear inducing gray scene. Shelley’s descriptive language and use of color to provoke emotion in the reader contributes to the overall theme of the poem. Also adding to Shelley’s powerful portrayal of the Wind is his use of personification. Shelley had so much respect for the power and beauty of the Wind that he writes about it as though he is writing about a lover. The reader can observe this right away in the title and the type of poem Shelley has written. Odes are typically written about people therefore Shelley has made a pretty substantial statement about his feelings towards the Wind by writing an Ode to it. Not only does Shelley personify the Wind through the title and structure of the poem, but also in the way he describes it. One example of this can be found in the first line of Stanza I. “O wild West Wind, thou breath of Autumn’s being”. The use of the word “breath” here is very powerful because it associates the wind with human’s natural necessity to breathe. Shelley once again gives the Wind a human quality at the end of Stanza III when he says, “the oozy woods… know Thy voice”. Giving the Wind a voice that is recognized and feared contributes to its overall power.

This line also provokes the reader to think about the many beautiful sounds of the wind and its unique qualities, just as human voices are unique. Personifying the Wind helps the reader to understand Shelley’s appreciation for it and how powerful he felt the Wind was. To further contribute to his theme, Shelley uses many metaphors throughout his Ode. As mentioned earlier, Shelley mentions death and new life quite often. Stanza IV is the perfect example of Shelley’s use of metaphors to express a dying wish. In the beginning of this Stanza, Shelley uses nature as a metaphor for himself. He tells the Wind that he wishes to be carried away by it but cannot because he is sadly only human. Shelley expresses a sadness of the limitations we have as humans and our inferiority to the Wind in this Stanza as well. In line 54 Shelley gives a metaphor describing human limitations in the form of thorns when he says “I fall upon the thorns of life! I bleed!” In the Last two lines of the Stanza Shelley uses a metaphor to enhance the readers understanding of why he is so infatuated with the Wind.

“A heavy weight of hours has chained and bowed One too like thee: tameless, and swift, and proud.” Shelley is expressing his wish to be unbound by limitations that the Wind does not have to experience. The poem Ode to the West Wind by Percy Bysshe Shelley uses imagery, personification, and strong metaphors to convey the author’s love for the Wind and his desire to be like it. Shelley wanted his words to change people’s opinions and drive a powerful force, like a strong wind. He admired the Wind’s ability to spread everything around it so quickly. He also admired its power. The reader can feel this sense of admiration and love through Shelley’s writing in this poem.

About The Poem "Ode to The West Wind" by Percy Bysshe Shelley. (2016, May 17). Retrieved from https://studymoose.com/about-the-poem-ode-to-the-west-wind-by-percy-bysshe-shelley-essay 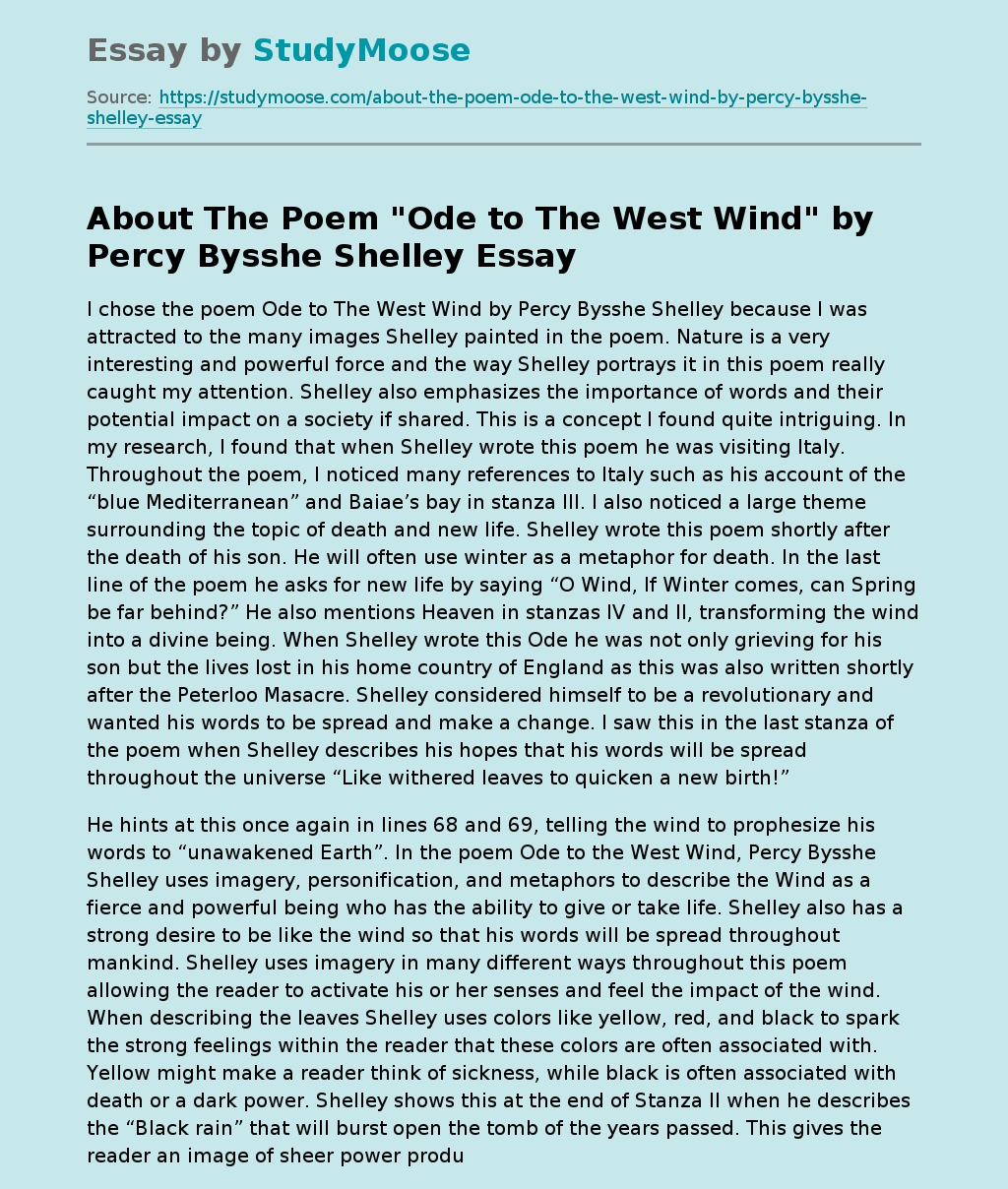