In the story “A Good Man Is Hard to Find” written by Flannery O’Connor, the grandmother is the central character who grows and changes with the story develops, she is a round and dynamic character. At first, she seems to be an unpleasant, contemptible and selfish old lady who is skeptical about her religion. But in the end, when “her head cleared for an instant,” the grandmother becomes a real believer of God. And she is heading straight to heaven for her final Christ-like act of love the moment before she dies.

Don't use plagiarized sources. Get your custom essay on
“ The Analysis of the Main Character – the Grandmother in “A Good Man Is Hard to Find” ”
Get custom paper
NEW! smart matching with writer

That is, she moves from spiritual blindness to grace. And that is the method that the author uses to relate her to the theme of the story.

Grandmother before the moment of grace

First of all, she is selfish and unpleasant. When her family prepares to go on vacation in Florida, she persuades them to go to east Tennessee, where she has relatives. Unable to convince them, she uses the news that a psychopathic killer who calls himself The Misfit is heading toward Florida as an excuse to change her son Bailey’s mind.

The grandmother is so self-centered that she just imposes her wish on those people around her. Also, her vanity and old belief make her an unpleasant character. She always claims to be a lady and thinks much of wealth and social status. When they set out to Florida, she dresses in her best clothes and an ostentatious hat lest no one can recognize her as a refined lady if she dies in an accident along the road.

“The grandmother had on a navy blue straw sailor hat with a bunch of white violets on the brim and a navy blue dress with a small white dot in the print. Her collars and cuffs were white organdy trimmed with lace and at her neckline she had pinned a purple spray of cloth violets containing a sachet.”

From her perspective of identity, I can see that she defines people externally, by clothing. And she tells her grandchildren, John Wesley and June Star, that “she would have done well to marry Mr. Teagarden because he was a gentle man and had bought Coca-Cola stock when it first came out and that he had died only a few years ago, a very wealthy man.” At this point, the grandmother appears to be the woman of old South who holds the outdated idea of hierarchy. She thinks only a gentleman who is rich can march with a lady, which is a stereotypically southern aristocratic prejudice. What’s more, she is a racist and opinionated. “Oh, look at the cute little pickaninny!” she said… “Wouldn’t he make a picture now?” “He didn’t have any britches on,” June Star said. “He probably didn’t have any,” the grandmother explained. “Little niggers in the country don’t have things like we do.” Her affection for the South and the days of slavery are still influencing her.

According to her understanding, black people, especially kids are supposed to be poor. They belong to the lower class of the society so that they are inferior to her, who is a lady from the upper class. She considers herself morally superior to others by the virtue of her being a “lady”, and she freely and frequently makes judgment on others. At lunchtime, they stop at Red Sammy’s, a barbecue eatery, where the grandmother laments that “people are certainly not nice like they used to be”. During the conversation with Red Sammy, the grandmother, narrow-minded and opinionated, repeatedly assures herself that she is a lady, a good Christian, and a good judge of character. She maintains that Red Sammy, a bossy loudmouth, is a “good man” and that Europe “was entirely to blame for the way things were now.” The part that grandmother is selfish, vain, arrogant and judgmental only makes her unpleasant for me, but when she gets her family hurt, she turns out to be contemptible.

After they leave the roadhouse, her obstinacy about going to Tennessee blinds her sense of direction, she manipulates her son into making a detour to see an old plantation she once visited as a girl. First, she arouses the kids’ interest to find a house with secret panel, and then she depicts the tour to the plantation “would be very educational for them”. She is well aware that any father would not reject something labeled “educational”, so she manipulates them to get what she wants. And this leads them to a very dangerous tour, which they have an accident later because the cat Pitty Sing she selfishly sneaks out leaps onto Bailey and he loses control of the car on the dirt road. In such awful situation, all that she cares about is to avoid the responsibility, so she pretends to be injured. Although she is an old lady, this behavior is really out of line. No one should put their family at risk and find themselves an excuse to escape from the responsibility. Her selfishness is more evident when the whole family are confronting with the Misfit, a serial killer. Technically, it is the grandmother recognizing the identity of the Misfit that gets all her family killed. However, she never beg the Misfit to spare her family, she just pleads for her own life.

In her conversation with the Misfit, she tells him, “If you would pray…Jesus would help you.” She calls on “Jesus” a number of times, but I am not sure if she means “Jesus will help you” or “she might be cursing” as she begs the Misfit “not to shoot a lady.” Plus, for one moment just before she dies, the old lady doubts Jesus, or at least feels abandoned: “Maybe he didn’t raise the dead”. It is an understandable reaction, after the colossal shock she has undergone: she knows that her family has been massacred. Here, her faith has been tested here. Therefore, I can only assume that the grandmother is a superficial Christian who scepticizes her belief sometimes.

However, in the end, when “her head cleared for an instant,” the grandmother has a moment of insight. The moment she reaches out to the Misfit and declares “You’re one of my own children”, she reveals and offers to the Misfit her compassionate love, she experiences what O’Connor refers to as her “moment of grace,” a time when she recognizes that she shares some trait with the Misfit despite their obvious differences. She knows she is far from a good person, she is flawed just as the Misfit. She abandons the moral high ground she had held and accepts the common humanity. Here is her religious epiphany. By embracing the moment of grace, she turns into a devout Christian, she believing in Jesus and is ready to “thow away everything and follow Him”.

The link between the grandmother and the theme

The link between the grandmother and the theme lies in the moment she embraces the moment of grace. The grandmother travels from the recognition only of her own selfish desires to self-recognition of herself in other through suffering. That is, she moves from spiritual blindness to grace. O’Connor suggests that the grandmother has received grace since Jesus “thrown everything off balance” by dying on a cross Himself. Thus, suffering is an essential part of receiving grace, and with the help of the Misfit, the grandmother has made this journey of suffering, a journey from spiritual blindness and selfishness to suffering, and finally grace. This passage witnesses the change of a selfish, arrogant old woman. Even though she has all these weaknesses at the beginning, she becomes the “good man” when she embracing the moment of grace. Violence and suffering are the necessary ingredients to help her change. In fact, both the experience of the grandmother reveals that good “is hard to find”.

The Analysis of the Main Character – the Grandmother in “A Good Man Is Hard to Find”. (2016, Apr 05). Retrieved from https://studymoose.com/the-analysis-of-the-main-character-the-grandmother-in-a-good-man-is-hard-to-find-essay 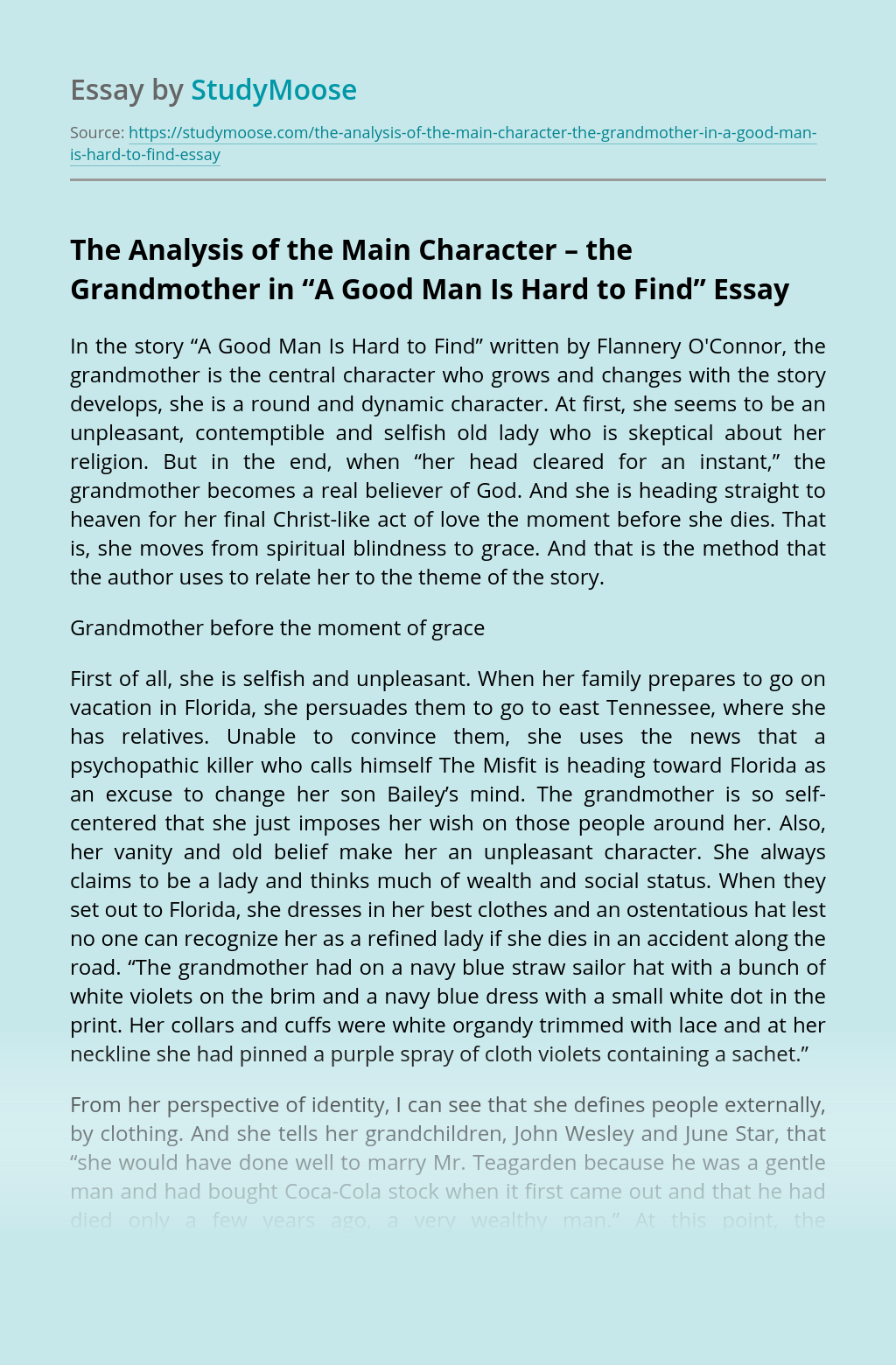