Good Country People is one of the most sought after works of Flannery O’ Connor. It is said to be the biography of O’Connor but she never claimed it to be such. The novel Good Country People seems to reflect the current situation and emotional status of O’ Connor while she was writing the novel, and if it is not in fact her biography, her emotion at that time has influenced the novel greatly. Flannery O’Connor has lived only until her 40s; her lupus has taken the best of her and has taken one of the finest writers of short story in the 20th century.

Flannery O’Connor’s lupus became active when she was working on her first novel, “She was stricken with this incurable disease in 1950 while at work on her first novel” (Baym 2568). After having lupus, she went home to be taken care of by her mother. Her mother is a catholic and she too sees the same views.

Flannery O’Connor was never ashamed of her religion, she is a catholic and proud of it, she tries incorporating it in her works like in Wise Blood. The Good Country People is not a romantic novel; the readers should not dwell on the image that Joy-Hulga Hopewell and Manley Pointer would end up together and live happily ever after.

Good country people means that they have a barrier of innocence surrounding them and that they like living their life simple, no glamour; good country people are fine living in a farm and tending to their livestock, the fast pace of the city does not attract them like most people do.

The novel wants its readers to discover the innocence of Joy-Hulga in gaining experiences in life, her struggle in breaking the barrier of being a good country people, and her belief in “nothing” as an atheist. Analysis of Good Country People The plot started with Mrs. Freeman and Mrs.

Hopewell in the kitchen discussing about the daughters of Mrs. Freeman. Mrs. Hopewell has been proud of the Freeman family, she has said that Glynese and Carramae Freeman are two of the finest girls she has ever met, “Glynese and Carramae were two of the finest girls she knew and that Mrs. Freeman was a lady” (O’ Connor 2570). Mrs. Hopewell viewed the Freeman family as simple people, saying to let go of people who are simple, good country people. Good country people symbolize the simplicity of life in the South, folks who would rather farm and be ordinary, people not being extravagant unlike the people in cities.

Joy, the daughter of Mrs. Hopewell, has an artificial leg. She was accidentally shot in the leg at a hunting vacation when she was 10. Joy has a PhD in Philosophy; Mrs. Hopewell does not think it is the way of good country people to be philosophers. She wanted to introduce her daughter as something else, a doctor or a nurse, but she could not introduce her daughter as a philosopher. Mrs. Hopewell knows that Joy is a bright child and that Joy knows a lot of things, but she also feels that every year, she grew less like other people and becomes more bitter and reserved.

At one point, she even shouted at her own mother in the middle of dinner, not bothering to explain what made her so mad, “Woman! do you ever look inside? Do you ever look inside and see what you are not? God! ” (O’ Connor 2573). Joy thinks that she is better that the good country people and that she can asses the character of a person just by looking at them and judging them because her brain is more superior than theirs. What she forgot is to asses her own character. It is her who does not see inside a person because despite her treating her mother rude, Mrs.

Hopewell still tried to understand her and support her decisions. Joy is always bitter and has legally changed her name to Hulga without the consent of her mother. Mrs. Hopewell thinks that Joy only changed her name because she felt like she does not deserve the name “Joy” and has changed it to something horrid to match her current situation. Joy-Hulga has an artificial leg, wears eyeglasses and does not walk often; her mother assumed that it was her appearance that made her change her name. The only person who calls her Hulga is Mrs.

The man’s name is Manly Pointer, and he is from Willohobie, “not even from a place, just from near a place” (O’Connor 2575). Joy-Hulga and Manly lived their lives oppositely. While Manly believes in faith, Joy-Hulga does not believe in anything. Joy-Hulga focused herself on studying philosophy, Manly has no interest to go to college. The only thing that got Joy-Hulga’s attention to center over Manly is when he declared that he has a heart problem and would probably not live long just like Joy-Hulga. Joy-Hulga’s mother, Mrs.

Hopewell, has stated that her daughter has a weak heart and would not live long; she said that if Joy-Hulga was blessed enough, she can live up to 45 years. Joy-Hulga become close to Manly, so close that they even go on dates. In one of their walks, Joy-Hulga asked why Manly always carries her valise, he said: “You can never tell when you’ll need the word of God, Hulga” (O’Connor 2579). On that same date, Manly tried and successfully kissed Joy-Hulga on the lips, “without a word he kissed her heavily” (O’Connor 2579) and continued like it never happened; they have discussed how Joy-Hulga is not saved and other religious things.

After a while, he sat closer to Joy-Hulga and took off her glasses, carefully slipping them in his pocket and continued kissing her. At first, she did not respond to his kisses but as the mood went by, she started kissing him; she said that his lips and breath were similar to a child’s breath and lips, “His breath was clear and sweet like a child’s and the kisses were sticky like a child’s” (O’Connor 2580). Manly then insisted that if Joy-Hulga wanted more of what they were doing, she must say she loves him, but Joy-Hulga said that “if you use the word loosely, you might say that.

Instead, he placed it in his suitcase with the bible on each end of the wooden leg, and as he departed, he said that Joy-Hulga should not bother looking for him because he gave them a fake name and that he has gotten things from other people the same way he got Joy-Hulga’s wooden leg. Before he finally disappeared, he left Joy-Hulga something to think about, “you ain’t so smart. I have been believing in nothing ever since I was born” (O’Connor 2583). The bible Manly kept holding on symbolizes his cover, since the bible is sacred; Mrs.

Hopewell and Joy-Hulga assumed that Manly was a decent man, making them fall blindly to his tricks. Even at the end of the novel, Mrs. Hopewell assumed that he was just good country people, trying to sell bibles in the village. Analysis of Joy-Hulga Name Mrs. Hopewell did not like the idea that Joy would change her name into something as hideous as Hulga; she thought that Joy has to compensate her name with her current situation, having a wooden leg, wearing glasses and never having good times. Ruth Holsen argued with the belief of Mrs. Hopewell and has disputed the fact that Hulga is the ugliest name anyone could find.

Holsen said that O’Conner named Joy, Hulga, because of her personality and not because it was ugly. She said that Joy picked Hulga because, “the full genius of its fitness had struck her” (Holsen 59). Eyeglass and PhD The eyeglass of Joy-Hulga symbolizes her intelligence. When Manly removed his glasses, she could not see; her blindness is associated with being stripped of her intelligence. It can be compared to love in the life of O’Connor, that is, no matter how wise she is, she has fallen blindly in love with Langkjaer. She sent him letters despite him not replying.

In one of O’Connor’s letters to Langkjaer, she has written that her mother told her that it was not right for a woman to keep writing to a man who does not respond, “My mother don’t think it is proper for me to send mail when J don’t receive it” (Bosco 288). The only time Langkjaer wrote back was when he told her he was engaged. After Langkjaer revealed that he was getting married, O’Connor’s tone shifted from writing “I” to “we,” “are glad that you plan to return South and we want you to let us help you make your wife at home in this part of the country” (Bosco 288).

Kate Oliver also agrees that the glasses symbolize Joy-Hulga’s intelligence, “Stripped of eyeglasses and any relevant use for her education, her true intellectual blindness is revealed” (Oliver 235). Joy-Hulga has a PhD in Philosophy, but when Manly took off her glasses, she fell blindly to his tricks, allowing him to manipulate her without thinking of the consequences. Wooden leg Joy-Hulga is often compared to the novelist herself. Her wooden leg is compared to her soul or heart. In the novel, she taught Manly how to remove her wooden leg and then allowed him to detach her wooden leg.

Mark Bosco thinks that the wooden leg symbolizes the heart of O’Connor and Manly taking her leg and leaving her can be compared to Langkjaer taking her heart with him as he departed to Denmark. Mark Bosco said that Joy-Hulga cried upon losing her leg because no one has ever touched it, much like the heart of O’Connor, she had never loved anyone like Langkjaer, “no one ever touched it but her. She took care of it as someone else would his soul, in private and almost with her own eyes turned away” (Bosco 293). Writers like Kate Oliver indicate that the wooden leg symbolizes the religion in the life of Joy-Hulga.

The false leg symbolizes the faith of Joy-Hulga. Since Joy-Hulga is an atheist, her bond in faith simply does not exist or that she just had faith on nothing, “the false leg with false religion…with the study of philosophical nihilism… is an empty and soulless expression of human spirituality” (Oliver 235). Conclusion The novel Good Country People may or may not be about the life of O’Connor but it did give clear perspective of the life Joy-Hulga and her struggle to be an individual, not like other people who her mother calls ‘good country people’.

Her innocence in relationships has lead her to be excited upon receiving the kiss and speeding up the process of understanding relationships. But after finding out that she has been tricked by the man she loved, she finds herself traumatized and lost. All her knowledge became useless and all that was left is emptiness, blank, nothing. O’Connor wanted to emphasize the religion she believes in. Being an atheist means that she believes in ‘nothing’, she lost her leg which symbolizes her heart and soul; she lost her glasses which symbolizes her intelligence. In the end, all she had left is nothing. 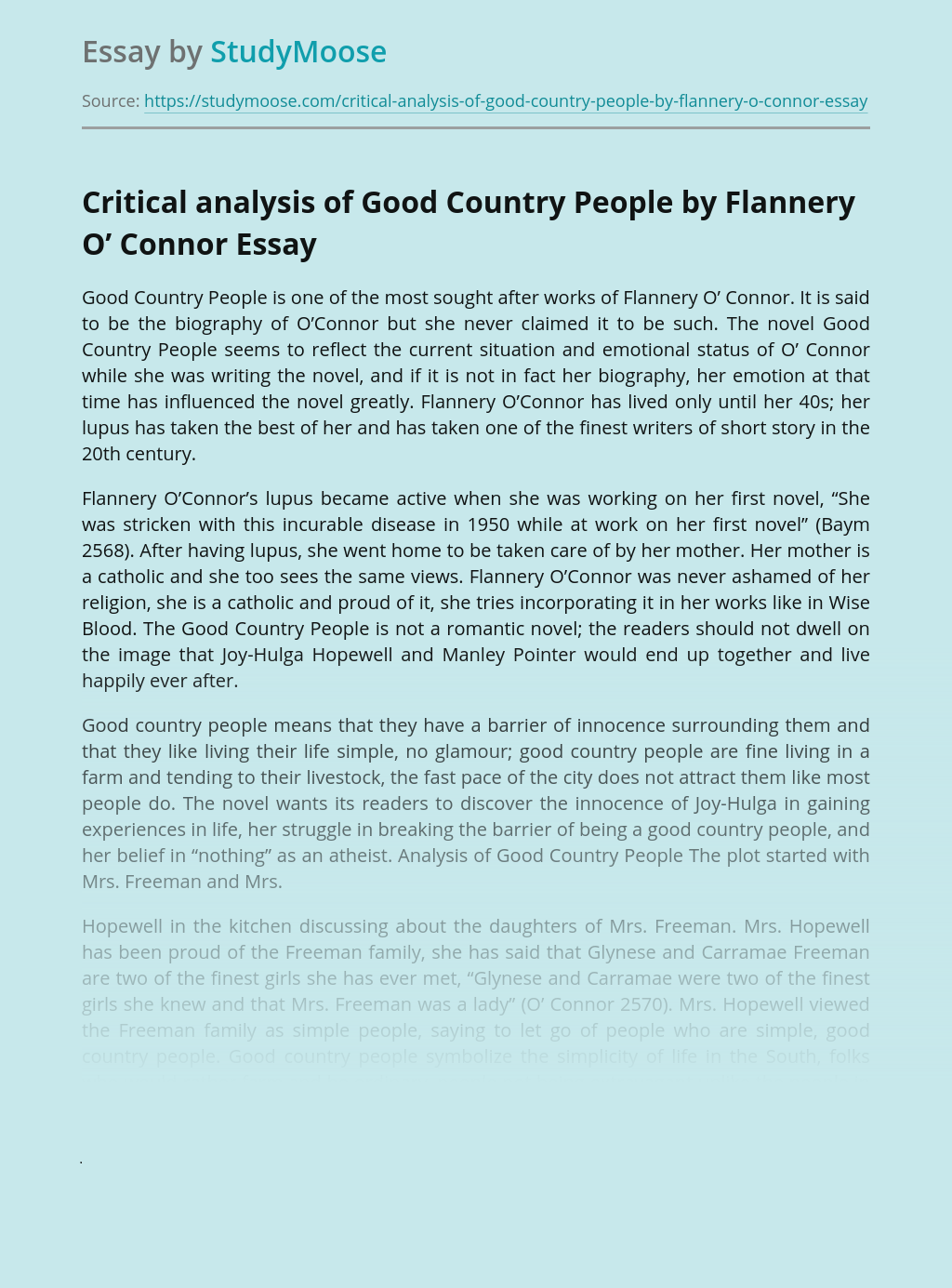