The Themes of a Good Man Is Hard to Find

The vision of Flannery O’Connor is one that is unmatched in the literary world. Her creative foresight and Southern background allow her to create an interesting setting appealing to the reader.

A prime example of her literary technique is when she has the grandmother reading the article about an escaped convict running away to Florida. “Here this fellow that calls himself The Misfit is a loose from the Federal Pen and headed toward Florida and you read here what it says he did to these people” (O’Connor 1).

Don't use plagiarized sources. Get your custom essay on
“ The Themes of a Good Man Is Hard to Find ”
Get custom paper
NEW! smart matching with writer

The grandmother goes on to insist the family should go on vacation to east Tennessee instead of Florida, and will not have it any other way. “The children have been to Florida before,” the old lady said. “You all ought to take them somewhere else for a change so they would see different parts of the world and be broad. They never’ve been to east Tennessee” (2). This shows the grandmother’s officious and manipulative character traits to the reader. This selection is also here to introduce the Misfit and keep the reader wondering about why this article was read, and if it means or foreshadows anything.

Another point that exemplifies O’Connor’s foreshadowing technique is when she expands on the grandmother’s self-interest in her appearance, and ends with the quote, “In case of an accident, anyone seeing her dead on the highway would know at once that she was a lady” (O’Connor 2). This presages that the grandmother’s selfishness and imperfect character traits will come into play later in the story, and eventually bring her to her demise, foreshadowed by the mention of death in the quote.

A third instance of foreshadowing is when Bailey, the father, turns the car around to go back to a dirt road heading to a plantation where the grandmother had visited years ago. “All right,” Bailey says, “but get this: this is the only time we’re going to stop for anything like this. This is the one and only time” (9). “His warning to everybody that this will be their only stop is darkly ironic” (Johansen 15). The three above cases are perfect examples of O’Connor’s extraordinary genius and excellent foreshadowing techniques as a writer.

Another way the author makes the story more enjoyable and more thought provoking is the emphasis on differing opinions of religion. The grandmother first brings up religion when she asks the Misfit if he ever prays. She does this to see if the Misfit is a religious man that might have a kind heart and spare her life. When the Misfit answers, “No, Ma’am,” the grandmother starts to try to talk her way out of death. “Jesus! ” the old lady cried. “You’ve got good blood! I know you wouldn’t shoot a lady! I know you come from nice people! Pray! Jesus, you ought not to shoot a lady. I’ll give you all the money I’ve got!

” (O’Connor 17). The Misfit then compares himself to Jesus. In the story, the Misfit tells the grandmother he was thrown into a penitentiary for killing his father. The Misfit declares he did not do this and does not know why they threw him in prison, but the authorities have papers on him, so there is no use in trying to argue his way out of jail. He compares his case to Jesus, stating that, “Jesus thrown everything off balance. It was the same case with Him as with me, except He hadn’t committed any crime and they could prove I had committed one because they had the papers on me.

Of course,’ he said, ‘they never shown me my papers” (O’Connor 18). This again shows the deep religious ties this story has. “This selection is in a sense ironic because the Misfit is the villain in the story, yet O’Connor attempts to make the reader feel sympathy towards him. Later on the story, nonetheless, it is shown that there is a strong possibility that the Misfit did kill his father, and the reader’s pity is stripped from him, leaving him bare in his own cruelty” (Johansen 7).

A third example of this religious theme is when the Misfit reveals his opinion on spiritual faith. “If He (Jesus) did what he said, then its nothing for you to do but throw away everything and follow Him, and if He didn’t, then its nothing for you to do but enjoy the few minutes you got left the best way you can” (O’Connor 18). By this, the Misfit means that in his opinion there is no real gray area in religion, either one chooses to believe what Jesus did or one does not, and they must accept the consequences.

These three major instances serve as a foundation for O’Connor’s theme of religion. In “A Good Man is Hard To Find”, two main plot points are the characters’ ideas about religion and the use of vision and foreshadowing. Both of these topics are well illustrated in the text by the author, providing adequate examples and planting new ideas in the readers’ mind. These two elements serve for the basis of a grotesque, yet incredibly suspenseful and provocative story that will leave you thinking and wondering.

The Themes of a Good Man Is Hard to Find. (2016, Sep 14). Retrieved from https://studymoose.com/the-themes-of-a-good-man-is-hard-to-find-essay 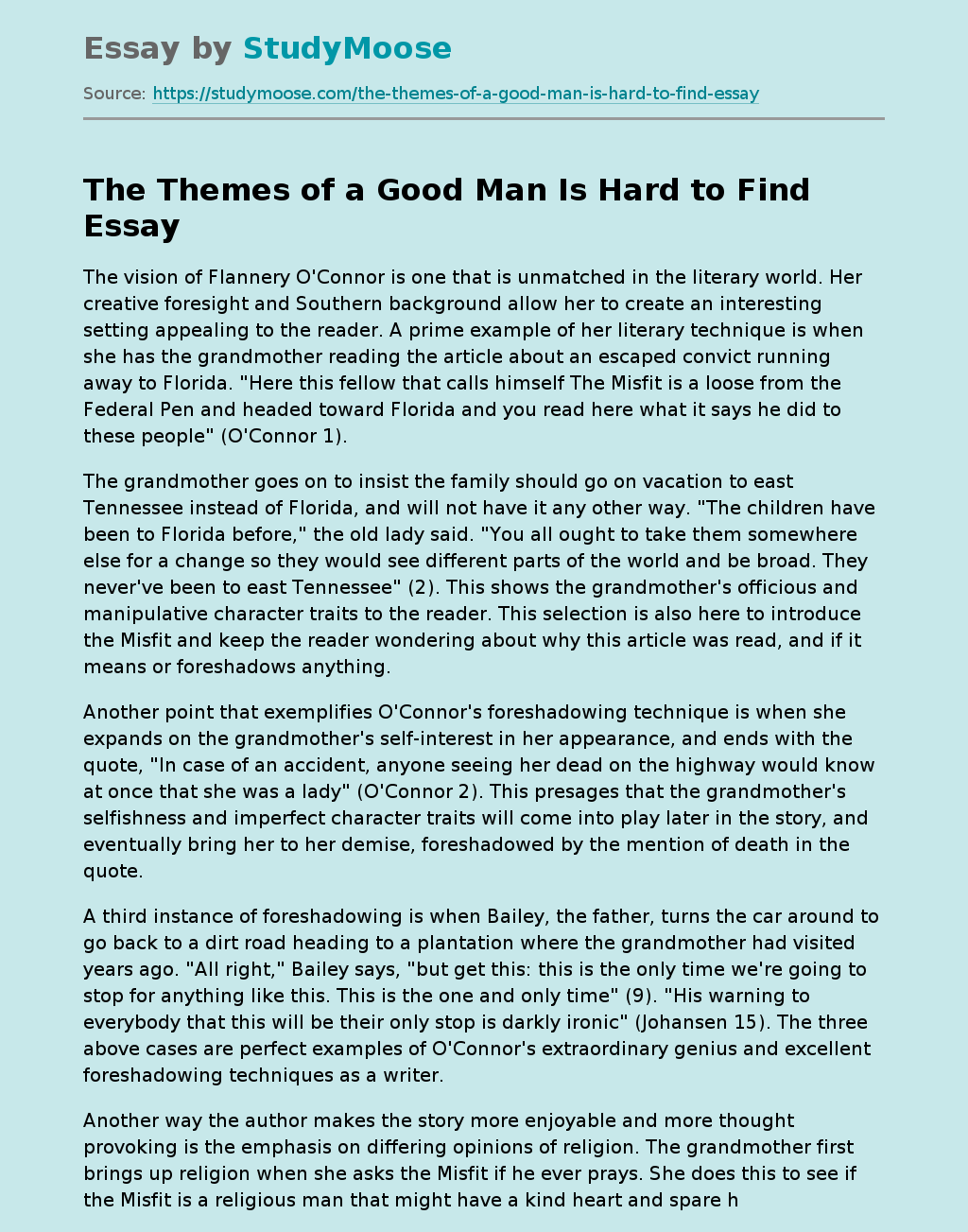