In Frank O’Connor’s short story “My Oedipus Complex” he writes about a young boy named Larry, who is use to his fathers absence because of World War I. Larry soon fines himself trying to take over his fathers house hold including wanting to marry his mother. When the war ends, Larry’s father returns home and Larry and his father are faced with the conflict of trying to attain his mother’s attention. Over time Larry eventually identifies with his father and starts to see his mother in a different way.

Up to the age of five, Larry never really had seen much of his father only on occasions.

He was very content on being with his mother. In the mornings he would wake up and climb into bed with her and begin the day talking to his mother about what they were going to do thru out the day. In the mornings after breakfast, they would both go into town to attend mass or go do some shopping.

By doing this, Larry began to try to make decisions like his father would. For example Larry’s mother wanted to have another baby because they were the only family who did not have a newborn. Larry was told they were expensive and could not afford it until father came home from the war. However, Larry noticed that their neighbors had a baby and it would have done them just fine. As Larry began to settle with the idea of him and his mother Larry’s father comes home after the war has ended and everything changes.

When his father was around Larry soon began to notice his mother’s attitude would change. She would start to scold Larry for being so loud in the mornings that his privileges of climbing into bed were cut off since he would wake his father sometimes on purpose for the reason that he got jealous. Her attitude began to change as well. She would tend to get anxious to please his father all the time and would now send Larry into town with his father. At first Larry was very optimistic about it, but soon realized that he and his father had different notions on their walk into town. Larry could not make his father do anything he wanted and the more he got wild the more his father didn’t seem too noticed. To Larry he just looked like an enormous mountain that glanced down at him with a grin of amusement.

During tea time she would only talk to Larry’s father about the news and get scolded if he interrupted. Larry felt this was foul play and he was prepared to compete with his father for his mother’s attention. Soon after Larry began to get himself into trouble by waking everyone up in the morning or throwing fit’s all around the house because he wasn’t treated as an equal his own home. By doing this his father lost his patients and gave Larry a slap and began to glare at him with his eyes out for murder. That’s when Larry realized that he was jealous too for the attention of his wife. Larry did not give up easily for his mother’s attention and told her one day that when he grew up he wanted to marry her and have lots of babies. She responded with a smile and told Larry that they will have one soon.

Almost immediately Larry began to notice his mothers had changed even when his father was not at home. She seemed preoccupied, stopped taking him out for walks and smacked him for no apparent reason. Disaster soon came for Larry and His father and it was called Sonny.

Larry disliked Sonny from the very beginning because of the constant crying that would annoy Larry and his father. Now everything his mother would do or talk about was Sonny. Larry felt so frustrated that he threatens to leave in front of his father and soon after Larry threat becomes a positive aspect. He notices his father starts to be exceedingly nice to him with a fine intelligence and his mother quite sickening in addition to being simple minded because of the baby. Also one night Larry wakes up with someone climbing into his bed and he notices it’s not his mother but his father who was now turned out of his own bed. He felt sorry for father because his mother had no consideration for no one except Sonny and gave his father a hug for assurance that he was still welcomed. Soon after Larry father went out of his way to buy him a really nice model railway. 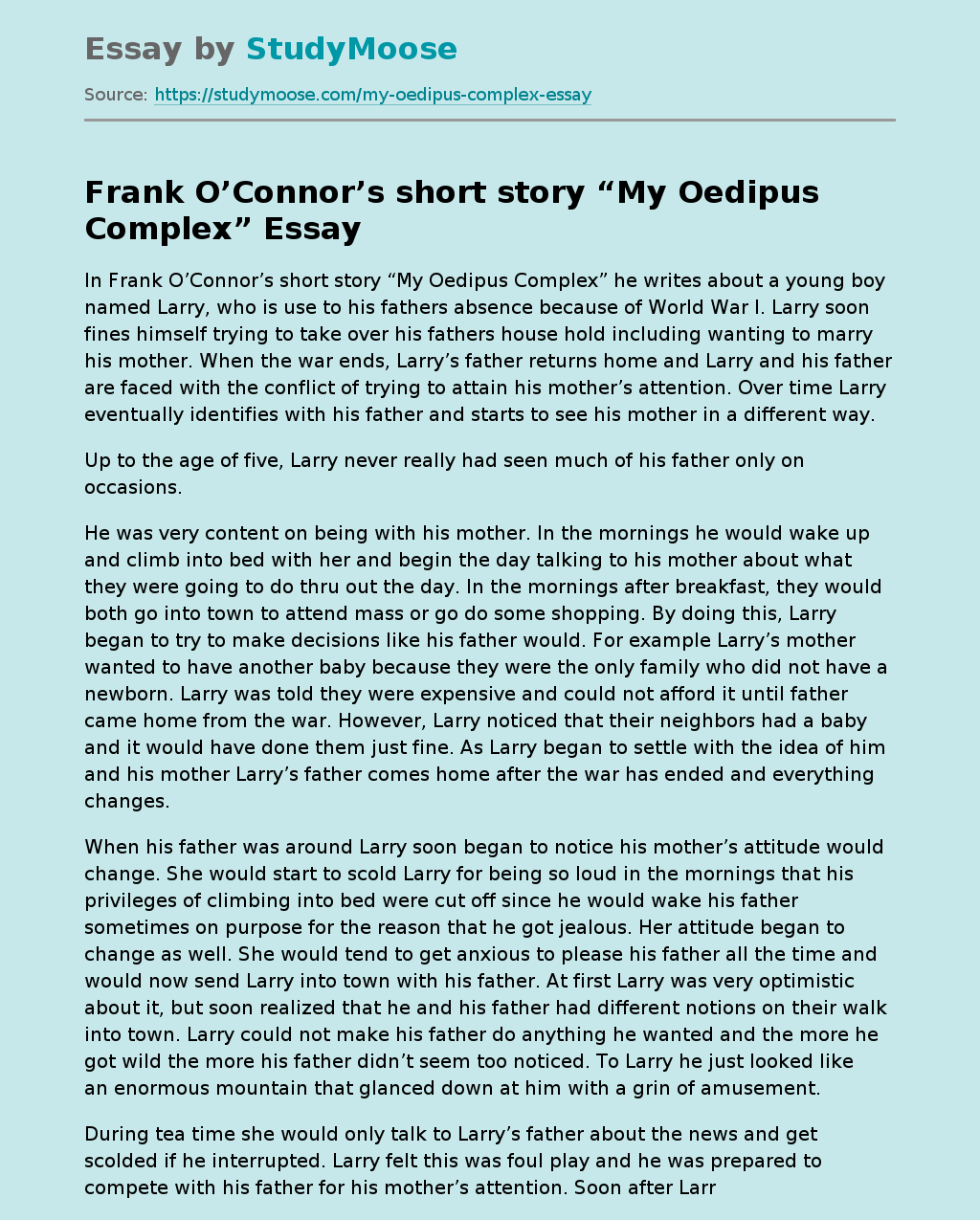