How has the feature film you have studied captured and sustained the viewers interest?

Yes exactly and today in my seminar I will identify these key words to analyze and answer this question. In the film ‘A Beautiful Mind’, the director Ron Howard, along with writers, producers etc have used many techniques in order to capture the viewers interest and sustain it through out the film. I have identified the most important techniques used as:

Most of us already knew that people suffering from schizophrenia do things a bit differently from the norm, but why? Surely we can’t understand exactly what’s going on in these peoples minds? For me however this all changed when I saw ‘A Beautiful Mind’, as I can now feel empathy for sufferers of this mental illness.

Don't use plagiarized sources. Get your custom essay on
“ A Beautiful Mind – John Nash ”
Get custom paper
NEW! smart matching with writer

Characterization is an extremely important part of this film as each actor moulds into the character on screen.

The main character John Nash is excellently played by Russell Crow and there is never any question of the authenticity of his character. Ron Howard does an amazing job of engaging his audience, as from the very beginning of the film we see that Nash is highly different from the other students attending Princeton University, as he sits by himself at the back of the class away from all the other students.

Nash is eccentric and often rude (for example when he bluntly asks a girl to sleep with him, without showing her any respect whatsoever) , however we also see that he is highly intelligent -all these factors help the audience experience the reality of the mental illness he suffers from.

We see that he is obsessed with his work which is clearly portrayed in the scene early in the film in Nash’s room where he is frustrated at himself as he struggles to come up with a breakthrough theory. He says to Charles “I can’t fail, this is all I am”, this shows how much his work really means to him.

This characterization is continued until the very last scene of the film where we see him 20 years later receiving a Nobel Prize, he is a now much older, gray haired John Nash. Crow does brilliantly playing an older Nash as he does not rely on elaborate makeup that he is wearing. This high level of characterization sustains the viewers interest until the final scene of the film. The “prodigal roommate” Charles happens to be the complete opposite of Nash, which when the twist is revealed we discover is no coincidence at all, he is in fact a character created by Nash’s mental disease due to the internal conflict occurring in his mind. This is why he is a polar opposite of Nash as he is laid back, humourous and sociable, adding contrast to the films characters. Jennifer Connelly plays the difficult role of Nash’s wife, Alicia, helping to steady Nash and his hallucinations. In reality one would think it would be extremely difficult to even act falling in love with someone of Nash’s arrogance, rudeness and clear lack of social skills. However from the very beginning Alicia hears not rudeness but honesty in his suggestion that they “bypass platonic activities” on the way to lovemaking.

Ed Harris is also very convincing in his role as William Parcher, a Department of Defense Officer and there is no doubt in Nash’s or the audiences mind that he could possibly be imaginary. He adds action, excitement and even danger to the film, drawing in the audiences attention. From start to finish these actors are not just acting, yet morph into their characters in this film, leaving no trace between their part and reality. This helps capture the viewers interest as they grow a connection with these characters, and sustains the audiences attention as we learn more about them as the plot develops.

Ron Howard has used cinematography and special effects to create impact as it engages the audience. It helps introduce an excellent main character and helps us experience the reality of the mental illness. We see most of the film through the Nash’s point of view, helping us understand his situation and the reality of his delusions. Characters who are in Nash’s hallucinations are always seen from his point of view through handheld camera shots. A good example of these point of view shots is the scene where Nash believes Parcher is going to hurt Alicia and his child so he lunges at her in an attempt to protect her. However we also see through Alicia’s point of view that “John, there’s nobody there” and Nash seems to be attacking her through a senseless act of violence.

When we do not see the story through Nash’s eyes we see him through views such as circling Steadicam shots like Nash’s visit to the Pentagon. At first this type of shot arouses the exhilaration of the visit but later on we can relate it back to his schizophrenia. Lighting is also a technique commonly used by the director to set Nash apart from others. We often see Nash’s face in the shadows symbolizing that he is troubled and different from a normal person socially, whereas cinematography has been used to light up other characters such as Charles and Alicia. This shows that they are more light hearted and relaxed and clearly do not face the same struggles as Nash.

Extensive use of special effects are also used as the film progresses to engage the audience and reveal John Nash and his ways of thinking. This is first revealed at the punch bowl scene when Nash sees another students tie through the light reflection of the punch bowl on the table. Nash tells him “There must be a mathematical equation for how bad your tie is” as from his point of view the pattern of light shining through the glass coincide with the patterns on the tie, this flash of light accompanied by a tinkling sound is a very significant special effect as it helps the audience understand Nash’s way of thinking and see that there is something different about him that’s not quite right.

Another example of special effects is in the bar scene with the blonde girl. Nash finds inspiration through his mathematical insight into the bargain theory. The blondes face lights up as Nash explains to the men not to go for the blonde as that way they will not get any of her friends either. As he explains it shows the men being obliterated one by one into puffs of smoke as she rejects them, expressing his theory in concrete ways. The style of cinematography and special effects is continued throughout the movie helping sustain the viewers interest.

It’s no wonder Nash wouldn’t accept that all these people and expeditions he takes part in are fake. From early on in the film pace is used to capture the audiences attention, when Nash’s code-breaking expeditions begin to heat up, as he is supposedly being chased by the Russians and scenes such as the car chase are results of this spy work. This shoot out which ends with the ‘enemy’ car and its occupants sinking in the harbour is one of the many small climaxes of the film, as it makes the us, the audience, believe Nash really is being hunted by the Russians. This pace and action, makes the audience feel a sense of danger capturing their attention and drawing them in.

However, this is merely to intensify the twist which we discover when Nash is taken to a psychiatric hospital to be treated for his mental illness. This use of use of pace is extremely deceptive as it fools the viewer into thinking that they are about to see an action movie. Even so, when we do discover that these are hallucinations, Ron Howard manages to keep the viewers interest by maintaining a steady pace to the film with many more climaxes in the story, as Nash still won’t accept that these people and occurrences are not real “Imagine if all your most important memories, and the people and places had not died or disappeared; but had never been”.

Okay, so going back to my main points. From the very first scene of the film great characterization by the actors and the use of a wide range of techniques particularly cinematography, special effects and pace have been used to make this film successful in capturing the viewers interest. The makers and actors involved in the creation of A Beautiful Mind have continued these techniques throughout the movie to make for an exiting twist helping keep a steady pace and sustaining the viewers interest for the whole 135 minute run time. On top of this the film gives a great insight on what it is really like to suffer from a mental illness such as schizophrenia, helping others to accept these people for who they are and that they are really not much different from everyone else. 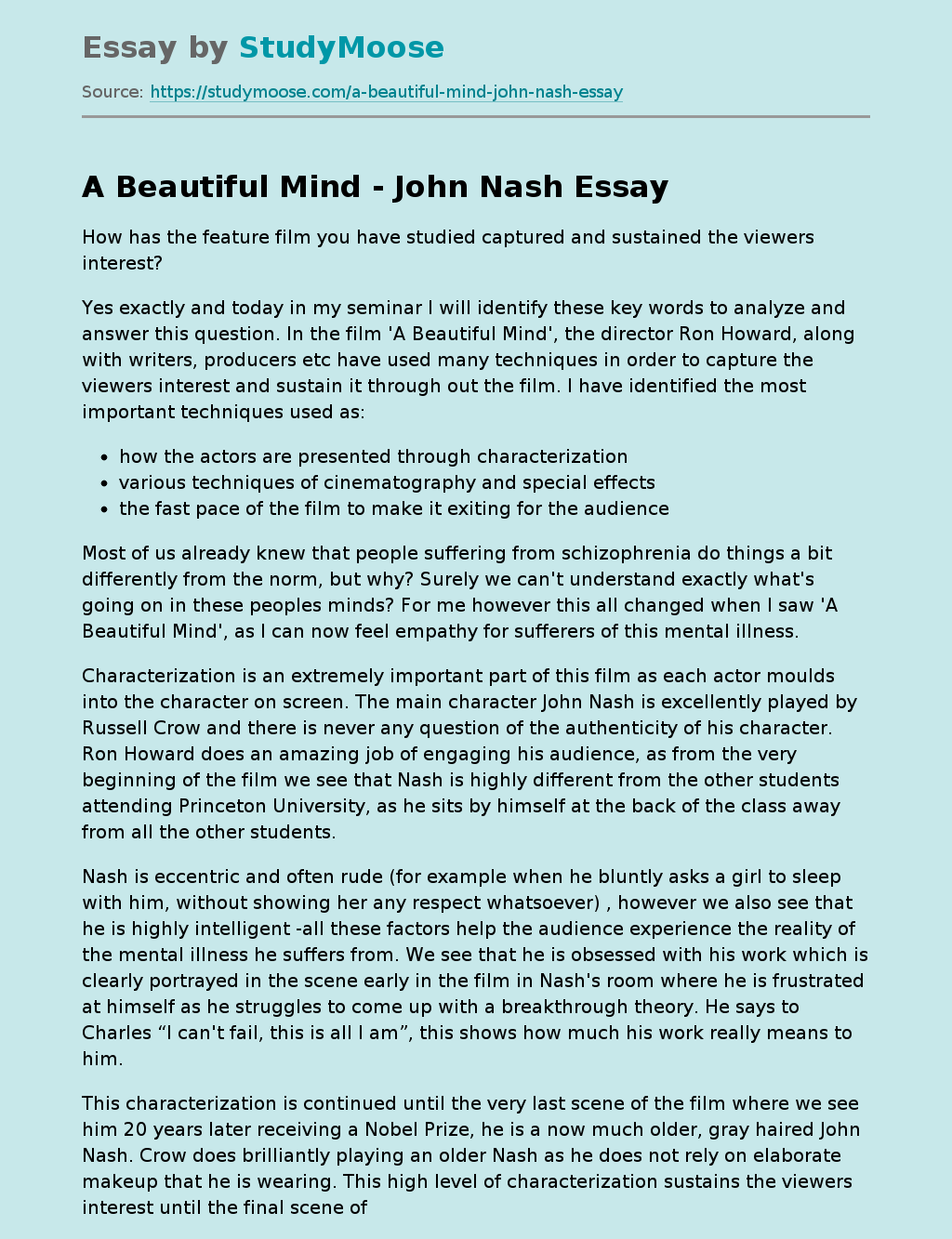