A Review of a Beautiful mind and Its Depictions of Schizophrenia

A Review of a Beautiful Mind and Its Depictions of Schizophrenia Introduction: In the year 2001 the movie A Beautiful Mind was released as a biography of the life of John Nash. As the movie flows, we can easily see how his condition, schizophrenia, interferes with his personal life as well as with his home life and social life. The movie does a good job in describing Nash’s experiences and some of the help that put him back on his feet, and that motivated him to stay strong.

Don't use plagiarized sources. Get your custom essay on
“ A Review of a Beautiful mind and Its Depictions of Schizophrenia ”
Get custom paper
NEW! smart matching with writer

Plot Review: The movie A Beautiful Mind begins with an odd young mathematician by the name of John Forbes Nash Jr.

who is attending Princeton University in 1948. There is where he meets his roommate Charles, which is his first hallucination, but we don’t know that until later on. While at Princeton, Nash discovers a mathematical theorem and becomes a professor at MIT. John soon gets married to one of the graduate students by the name of Alicia, but shortly after that is diagnosed with schizophrenia.

Nash believes he is some sort of spy because one of his hallucinated agents told him he had to work for the government because his profile is very high.

Nash believes his hallucinations are real and he has to be taken to special psychological hospital. Nash never loses the support from his wife Alicia. She does have a hard time, but she tries to deal with his condition because of the love she has for him. Alicia and his baby are the only ones that are there to motivate him, but he suddenly gives in once again and fails to demonstrate that he is completely in the real world; Nash parts from society and has many hallucinations once again with Charles, Charles niece, and William, which is the man that makes Nash believe he is working for the government.

Nash decides to give it his all for the love of his wife and son, after realizing that William and his other hallucinations are not real life. Nash works with his condition by avoiding and ignoring Charles, the little girl, and William; although at first it seems very hard for him to do this, he manages to conquer the temptations he use to have to talk to his hallucinations. Nash, back in the real world again starts teaching in the 1970s and is awarded the Novel prize in economics in 1994. Schizophrenia Disease:

Schizophrenia is a common disease in American life and it affects 4. 5 million of the adult population in the United States. This disorder “Lasts for about six months and includes at least two of the following symptoms: delusions, hallucinations, disorganized speech, disorganized behavior, and decreased emotional expression” (Plotnik & Kouyoumdjian, 2011, p. 538). Schizophrenia also brings in disorders of thought, disorders of attention, disorders of perception, motor disorders, and emotional disorders.

There are three subcategories of schizophrenia; paranoid, disorganized, and catatonic schizophrenia. Paranoid schizophrenia, like Nash experienced is, “Characterized by auditory hallucinations or delusions, such as thoughts of being persecuted by others or thoughts of grandeur” (Plotnik & Kouyoumdjian, 2011, p. 538). Disorganized schizophrenia is “Marked by bizarre ideas, often about one’s body, confused speech, childish behavior, great emotional swings, and often extreme neglect of personal appearance and hygiene” (Plotnik & Kouyoumdjian, 2011, p. 538).

Catatonic schizophrenia is “Characterized by periods of wild excitement or periods of rigid, prolonged immobility: sometimes that person assumes the same frozen posture for hours on end” (Plotnik & Kouyoumdjian, 2011, p. 538). There is no real cure for this illness. Depictions of the disease in the movie: In the movie, A Beautiful Mind, schizophrenia is well shown as it develops in Nash’s life and as it interferes with his social, personal, and home life. Nash is in Princeton University when his disease first starts to appear. In the movie we see a character by the name of Charles, which is Nash’s roommate.

The movie makes us believe that Charles is real life a character until later on to better illustrate the condition that Nash has to face. We believe that Charles is real because the movie actually shows Charles; it’s as if we are Nash’s eyes because he actually sees Charles and that is what schizophrenia does to a person. Another character that we believe is real is William Parcher and the same thing happens with this character. Everything that William tells Nash to do feel’s so real and taunts Nash every day as his condition worsens.

Nash doesn’t believe that his hallucinations are not real life and is very upset when Alicia tells him that everything is in his mind. This can happen to a lot of people that have schizophrenia because in their mind everything is actually happening and the hallucinations that they are seeing seem so real. Like Alicia, many people who have a relative with schizophrenia suffer and find it hard to believe that their relative has mental issues. Nash, diagnosed with schizophrenia had to start accepting the fact that he was ill from his mind.

This not only affected his home life, but also his personal life, and his social life. Nash was at home most of the day so he didn’t really socialize with anyone, but his wife. He couldn’t even be responsible for taking care of his own baby because Alicia didn’t trust him that much. He lost his job and was not able to cooperate in the relationship like a normal person. In some cases, like in Nash’s case, a person with schizophrenia will be tempted to stop taking their medications and the hallucinations can reappear.

Their hallucinations can impact their mind once again and their condition can worsen. Like it was shown in A Beautiful Mind, a family can slowly start to fall apart and the bond they use to have can slip away. Treatments for Schizophrenia: Schizophrenia is a disease or condition that still does not have a cure, but we do know that its factors are biological, neurological, and environmental. Like many other diseases, schizophrenia does not have a cure, but there are chances of recovery and medical treatments depending on the symptoms that are present within the person.

Chances of recovery depend on the type of schizophrenia and their symptoms. Schizophrenia is classified as either schizophrenia type one, or schizophrenia type two. Type one, “Includes having positive symptoms, such as hallucinations and delusions, which are a distortion of normal functions. In addition, this group has no intellectual impairment, good reaction to medication, and thus a good chance of recovery” (Plotnik & Kouyoumdjian, 2011, p. 538). Type two, “Includes having negative symptoms, such as dulled emotions and little inclination to speak, which are a loss of normal functions.

In addition, this group has intellectual impairment, poor reaction to medication, and thus poor chance of recovery” (Plotnik & Kouyoumdjian, 2011, p. 538). Drugs such as haloperidol can be given to reduce symptoms such as delusions. “Neuroleptic drugs, also called antipsychotic drugs, are used to treat serious mental disorders, such as schizophrenia, by changing the number of neurotransmitters in the brain” (Downar and Kapur, 208, p. 541). The neurotransmitter that is affected by these drugs is dopamine.

These drugs will reduce the symptoms of the person which most likely will help them recover faster and feel a little bit better. Inaccuracies in the portrayal of treatment measures: I believe that a lot of what was trying to help Nash was very accurate, but it didn’t look like he had enough support from anyone, but his wife. To me it seemed like motivation was the number one reason that he “recovered. ” His wife told him, maybe it’s not in your brain, maybe it’s in our heart.

It showed in great details how such a disease change the life of a schizophrenic and their family. It portrayed schizophrenia type one and also some symptoms of type two. By watching this film I became a little more familiar with what the disease can do. Of course not everything about the disease can be learned from watching a movie, but this film does have many great scenes that help us become a little more familiar with the negative effects of the disease. The movie did a great job and is capable of at least getting people to have an idea of what schizophrenia is.

A Review of a Beautiful mind and Its Depictions of Schizophrenia. (2016, Jul 24). Retrieved from https://studymoose.com/a-review-of-a-beautiful-mind-and-its-depictions-of-schizophrenia-essay 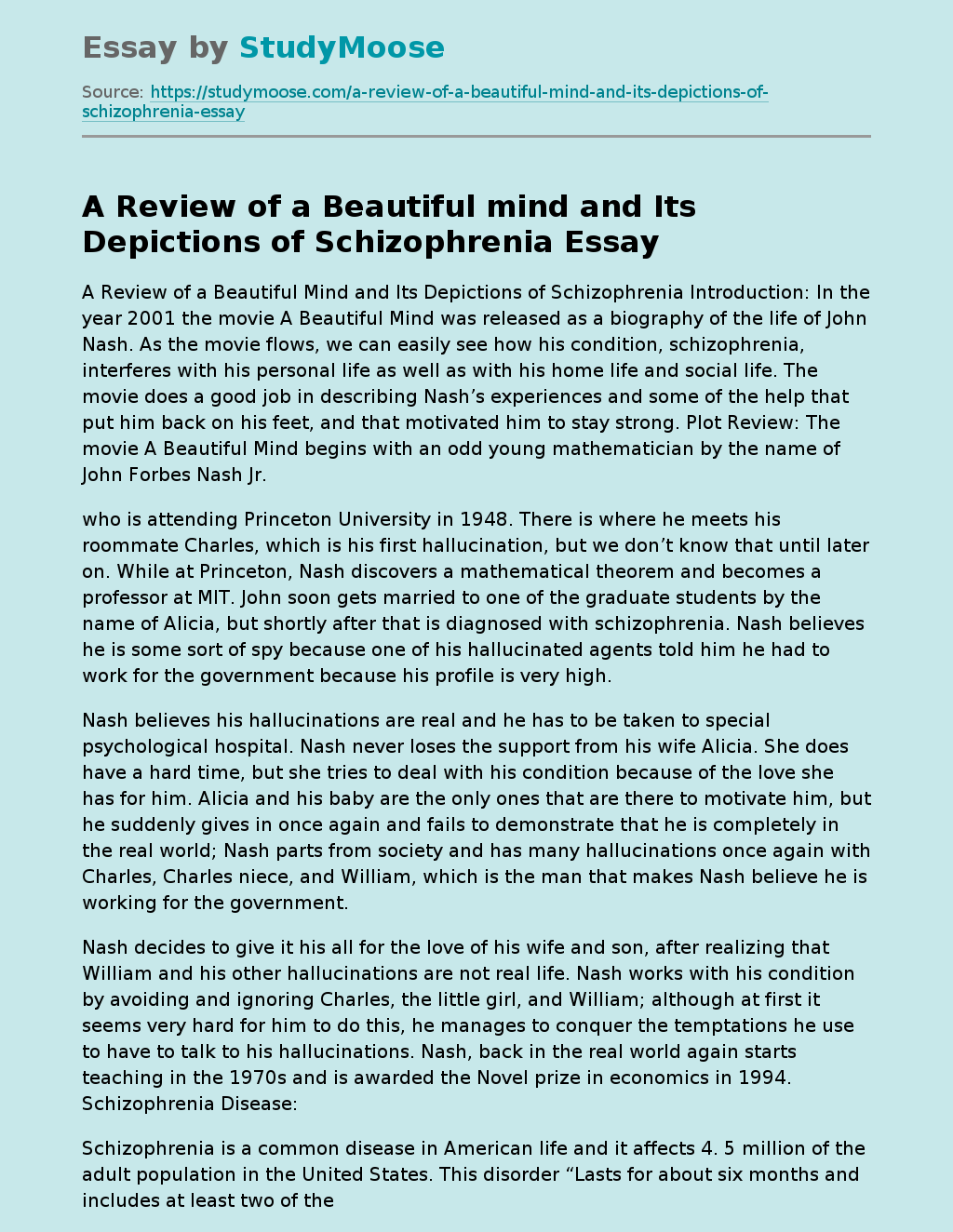