The Not So Beautiful Mind

There are times when I wonder if my mind is really my own. I’m almost sure there’s an external force that is pulling the strings, making me do the things I do  the good, the bad and the stupid. It’s probably because my life doesn’t feel under control. It’s a little ridiculous, I agree. Life can’t be controlled. But does every single plan have to go haywire?

It’s weird waking up in the morning and thinking you’re living someone else’s life.

Don't use plagiarized sources. Get your custom essay on
“ The Not So Beautiful Mind ”
Get custom paper
NEW! smart matching with writer

It could just be my overactive imagination at work again  all those books I read coming back to bewilder me. There’s a saying, “The most frightening monsters are the ones that exist in our minds” and it couldn’t be truer.

There’s an interesting tale in the yogic lore about the power of the human mind:

A man went for a walk and accidentally walked into paradise. After the long walk he felt a little tired and thought, “I wish I could rest” He spotted a beautiful tree, beneath which was soft, green grass. He slept on the grass.

After a few hours, he woke up well-rested. Then he thought, “I’m hungry. I wish I had something to eat.

” He thought of everything he wanted to eat and it just appeared in front of him.

After he had had the food, the man thought, “I wish I had something to drink.” He thought of all the drinks he wanted and all of them appeared in front of him.

The man started to think, “What is going on here? I asked for food, I got food. I asked for drinks, drinks came. This tree maybe haunted by ghosts”

He looked and there were ghosts! The moment he saw them, he got terrified and said, “Ghosts! They will likely torture me.”

The ghosts started torturing him, and he started screaming and yelling in pain. He thought, “Oh these ghosts are going to kill me.” He died.

The problem was, he was sitting under a wishing tree or a ‘Kalpavriksha’. Thus, whatever he asked for became a reality.

The story is unnerving in a relatable way. Human imagination is the scariest, indeed. The man was a representation of the thought process of most people. People are wary of good fortune. We see, hear and read about so many terrible incidents that we are skeptical. Anything good is treated with suspicion and laced with doubt, rather than gratitude and happiness. There is a sense of balance instilled within wherein people assume the good will be followed by something equally bad. Something along the lines of ‘This day has been great’ will lead to an automatic ‘I wonder how long it will last. I wonder if I locked the house·oh no. That’s it. I’m going to get robbed blind’.

When it comes to imagination, the world can be classified into two major psychological groups  optimists and pessimists.

The optimists have a larger than life visualization of the world they live in. Blue skies, blooming flowers. There is a silver lining in every storm cloud. They see the upside of situations, and don’t bother about setbacks as much. A lot of times, they overlook factors like risk and failure while making decisions.

Now, the pessimists are on the opposite end of the spectrum. Grey skies, withering gardens. They are skeptics, and have a tough time believing in unlikely positive outcomes like optimists. They have a tendency to imagine the worst possible scenario in a matter of seconds. It’s this quality that allows them to have a more developed imagination  the scarier imagination.

I think the unpredictable nature of human imagination makes it scary. You never know what places it can take you. It’s normal to be taken aback by sudden thoughts that cross your mind. What came first: the hen or the egg? Why do cats and dogs not get along? Why is there a stash of plastic bags under my mattress? Is the wall changing colors?

You get the drift.

Strong-willed, disciplined people find it relatively easier to control the direction of their thoughts.

A couple of days ago, there was an article about Elon Musk’s plan to put chips in people’s brains and create human-AI hybrids. This year the company showcased the technology it’s developing  a chip connected to wires which fan out into the human brain, capable of both recording brain activity and stimulating it. Apparently, Musk aspires for a completely digitally driven society. If this is achieved, mind-based communication would become possible and it would open doors to new type of relationships.

Also, feelings and thoughts would become commodities for exchange and purchase. Musk’s vision seems skewed and far away now but the innovation makes for a great scoop. His imagination and creativity appear to be unparalleled. I, on the other hand, can’t help my anxiety about the future. Would everyone know every thought crossing our minds? Would social interaction cease to exist? Would people remain people or evolve into cyborgs? And would cats and dogs finally start to get along? Oh, the questions and possibilities are endless.

I’ve always wondered about cats and dogs – even as a child watching Tom and Jerry. Tom and Jerry would occasionally team up, but the dog Spike was often a common foe. Although most of my childhood was spent imagining the face of the mistress. Seriously, couldn’t they have tilted the camera up for once and shown us? She’s really scary in my nightmares.

I think it’s important to not let your imagination cripple you. Instead, befriend it and let it empower you. An open mind is a field of infinite opportunities and experiences. Of everything I’ve ever read, there’s one quote I live by: ‘Don’t be afraid to have an open mind. Your brain cannot fly away’.

Research Paper On Torture • Essay on Brain • Essay about Anxiety

The Not So Beautiful Mind. (2019, Dec 02). Retrieved from https://studymoose.com/the-not-so-beautiful-mind-essay 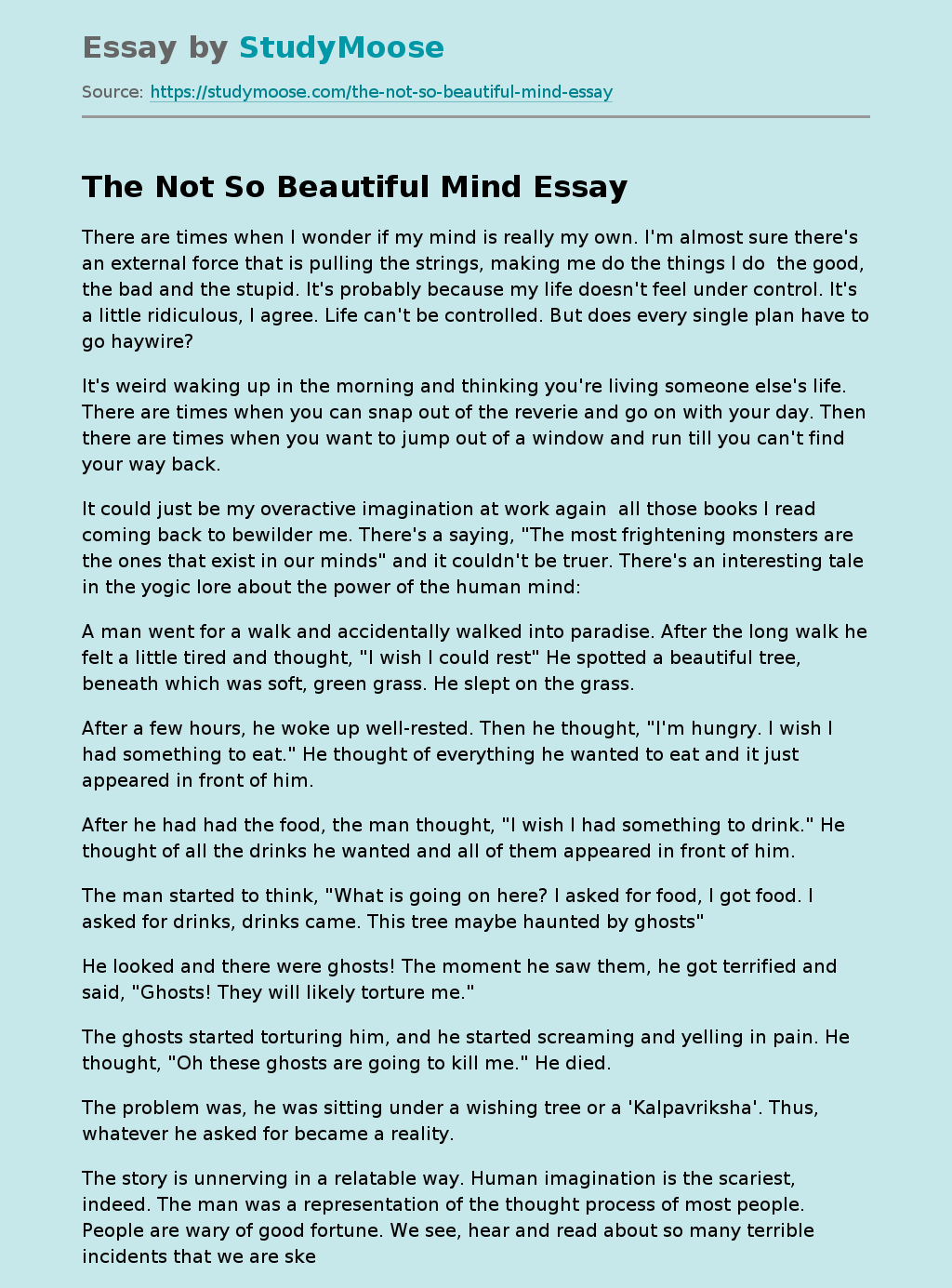