All people on the planet live their entire lives to end up being something greater than they in fact are. The quest for success in life is nonstop and people are never satisfied with what they have. In the poem “Kindly Unhitch that Star, Pal” Nash alerts not to dream for a goal that can not be attained, to put it simply people’s long and arduous journey through life is pointless and success is unattainable.

Nash uses diction efficiently in kindly unhitch that star to demonstrate how peoples missions for success differs in lots of methods.

He utilizes the phrase “… others appear to believe they’ll get simply as far by devoting their evenings to the stuffy of the distinction between brunettance and blondance” (Nash 21) to reveal the superficial paths individuals require to become successful. The keywords in this expression are “brunnetance and blondance” (21 ), which are words comprised by Nash to reveal that an individual believes that by changing their hair colour to stand out more will help them attain success.

The word contemptuous is utilized twice in this expression and it contributes to the impact of the whole verse.

Contemptuous is a strong and reliable word used to explain the sensation of successful individuals towards the average Joe, inferior or useless. He utilizes this word to emphasize that if everyone was equal they would attempting to end up being more effective which proves the idea that the journey through life will never be complete enough even if you end up succeeding.

In addition to the authors efficient use of diction he uses parallel structure to show the same ideas of methods on how to attain success in life. In line nine and ten are constructed parallel to lines twenty-two to line twenty-three the first idea, “Indeed, everybody wants to be a wow, /but not everybody knows exactly how.”(9-10) is parallel to the idea “In short, the world is filled with people trying to achieve success, /and half of them think they’ll get it by saying No and half of them by/saying yes.”(22-23) these ideas both express the idea that all people want to be successful and nobody wants to be a failure but people have different views on how to go about achieving success.

Another example of parallel structure within “Kindly Unhitch that Star, Buddy” is when Nash states “… other people think they will be able to put in more time at Palm/ Beach and the Ritz.”(13-14) is related to “… others seem to think they’ll get just as far by devoting their evenings to the stuffy of the difference between brunettance and blondance” (19-21). These two lines both compel the ideas of the shallow methods people will try to become successful in the world. In lines thirteen and fourteen the superficial idea of hanging around already famous people at the Ritz and Palm Beach will make you successful as well, similarly the idea in the other quote shows the idea that someone believes they will become more prosperous in life by simply changing their hair colour.

The third literary device that is very evident in Ogden Nash’s “Kindly Unhitch that Star, Buddy” is irony. The entire poem is written in a very ironic fashion but this irony is most apparent very early in the poem when Nash writes “And in celestial circles all the run-of-the-mill angels would rather be/ archangels or at least cherubim and seraphim,” (5-6) This is ironic because angels are supposed to be higher beings without any superficial desires or wishes of successfulness. Nash uses this to show that angels should be satisfied with what they are and this can be compared to the lives of many people in the real world trying futilely to become successful.

Another example of irony is used when Ogden Nash coins the phrase “Some people think they will eventually bear diamonds instead of rhinestones, / Only by everlasting keeping their noses to their ghrinestones,” (11-12). Nash modifies this phrase slightly by changing grindstones to ghrinestones to show that people want to bear diamonds in life but in the end all they will achieve is rhinestones, or failure. Nash uses irony effectively and efficiently throughout the entire poem but it is distinctively evident in lines thirteen to twenty one when Nash writes about the different methods of success people try:

And other people think they will be able to put in more time at Beach and the Ritz By not paying to much attendance at the office but rather in being brilliant by starts and fits.

Some people after a full days work sit up all night getting a college education by correspondence, While others seem to think they’ll get just as far by devoting their evenings to the study of the difference in temperament between brunetteance and blondance (13-21)

In these nine lines Ogden Nash describes four different schemes that particular people have to become successful in life. He covers a lot of methods of achieving success such as hard work, eccentricity, and popularity to show that none of these pursuits will make you a successful person because in the end all your efforts to strive for success are in vain.

Through diction, parallel structure and irony Nash demonstrates how an average Joe’s journey through life and his striving to become successful will most likely end in failure. The theme of the quest for success is futile in “Kindly Unhitch that Star, Buddy” is a good example of people’s obsession with success and the value of their life based on that success, people should be satisfied with their life and not trying to live up to something that is unachievable. 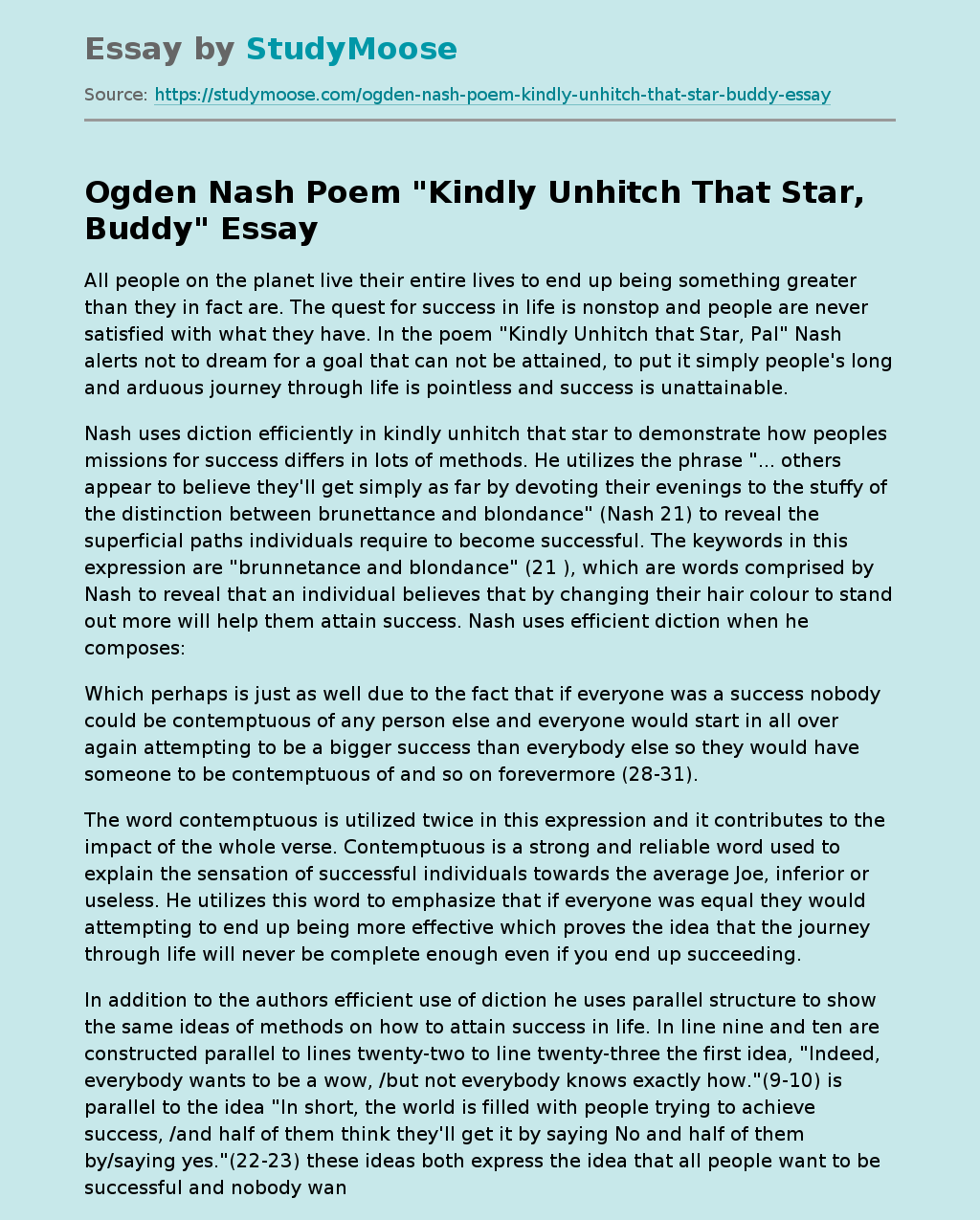