A Poem Song of The Barren Orange Tree

I do not agree with the conclusions we came up with in class. After rereading the poem, I have drawn a different conclusion about the message. In the first stanza, the orange tree addresses a woodcutter. The tree is imploring the woodcutter, but not to be cut down. The tree isn’t suicidal, and it doesn’t the need to self mutilate (and honestly, it can’t if it wanted to, it;s a tree), it’s just begging the woodcutter to sever its shadow from itself.

Don't use plagiarized sources. Get your custom essay on
“ A Poem Song of The Barren Orange Tree ”
Get custom paper
NEW! smart matching with writer

The shadow constantly reminds the tree of his bare, scrawny branches, which lack in leaves and fruit. The tree’s problem doesn’t come from its bareness, the tree’s problem is its self awareness of its bareness. The tree simply wants self ignorance. Maybe because the tree also knows that the woodcutter can’t provide the separation of the tree with its shadow, it is even more dejected. In the second stanza, we learn that the tree sees itself everywhere, and not in a positive way (in the other trees in the orchard that can bear fruit).

When the tree says “the day walks in circles around me” I realized that, at least during the day, the tree sees its shadow in all different angles.

I almost get the feeling that the shadow is stalking the tree, ignoring its personal space and inducing a sort of claustrophobia. In the third stanza, I got the sense that, if it were not for its shadow, the tree could bear its current state.

The tree could live its life, taking the bugs on its branches as signs of life, and not signs of its pointlessness. The fourth stanza is a refrain of the first, only it doesn’t quite feel the same. The words seem heavier, they resonate more.

In some ways, I do agree with the orange tree. In others, I do not. The orange tree hates being reminded of its flaws and failures in its peers. So do I and so do most humans, if we’re being realistic. Although I absolutely hate when my negative suspicions about myself are confirmed, I wouldn’t want the people who care about me to never point them out to spare my feelings. I do not want self ignorance, or ignorance of my flaws. Knowing your flaws exist is the first step towards remedying them.

In fact, I believe that the tree’s approach towards its faults is totally unrealistic, until it has a change of heart about the bugs. When the tree takes the bugs as a positive that came with the negative, this is the tree’s first step towards self acceptance. To put this in human terms, this is basically like saying “I wish my eyes were blue, but the brown reminds me of my father, so I guess it’s okay.” I like to imagine that if Lorca could write a fifth stanza or a stanza to replace the fourth one, it would be about how the tree takes steps towards accepting itself, and gains happiness from this.

A Poem Song of The Barren Orange Tree. (2016, Mar 18). Retrieved from https://studymoose.com/a-poem-song-of-the-barren-orange-tree-essay 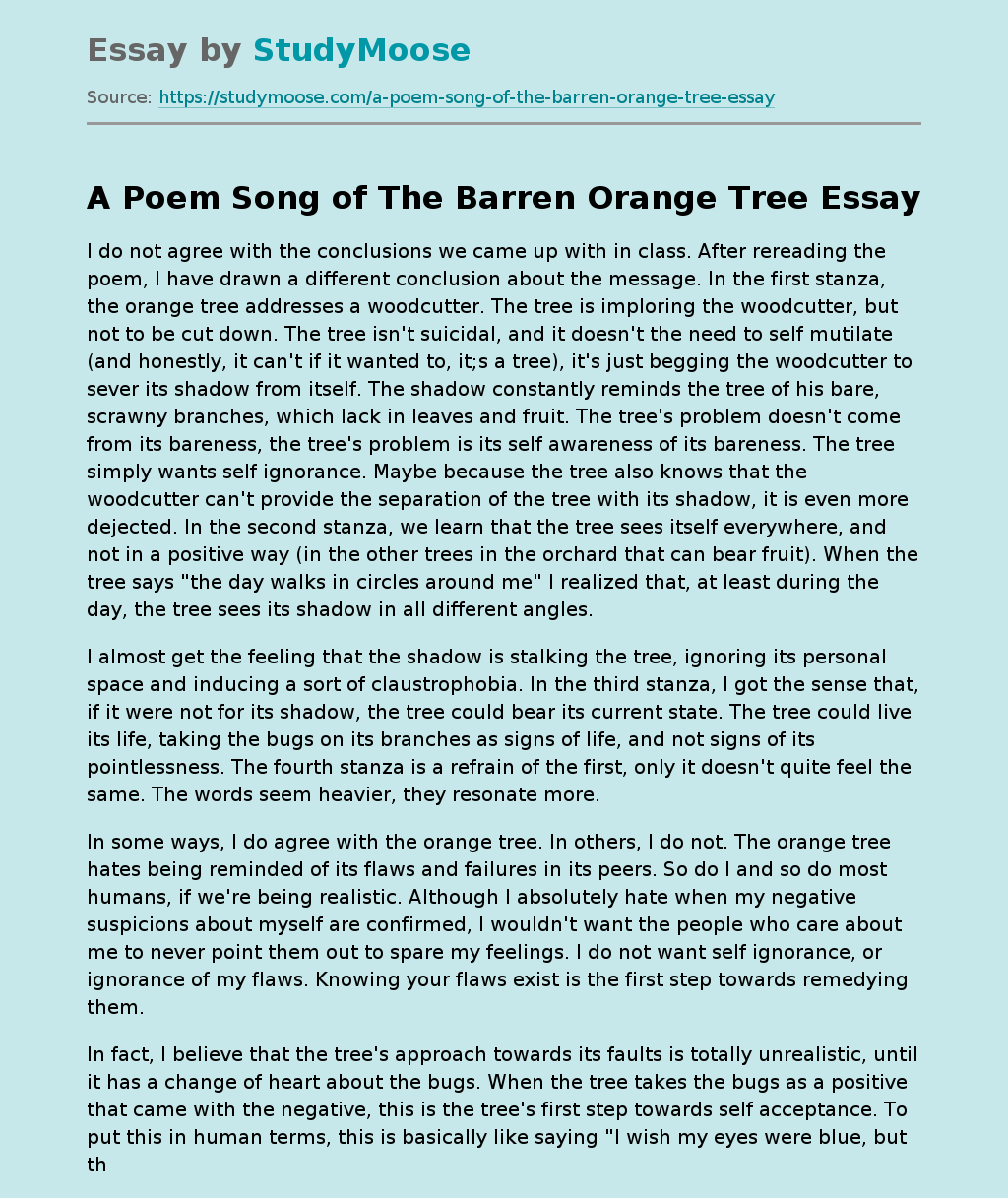